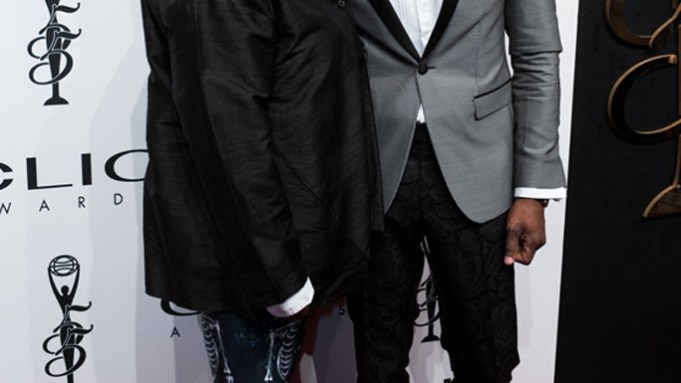 Cipriani’s atmospheric space on Wall Street in New York played host to the event, which included a three-course dinner, a slew of speeches from ad execs and a short performance by Aloe Blacc, who performed his hit “The Man.”

The more lively moments of the night came from Goldberg, who hosted the show, as well as from fellow comedian Seinfeld, who was there to accept an award.

“In here tonight are some of the most seductive marketers on Earth,” said Goldberg. “You guys could talk the life savings out of a nine-year-old girl. You make a man cry over itch cream. Itch cream! You persuade an adult woman to buy a beauty product called Nad’s. F–k Vladimir Putin, that’s real power.”

Later, Blondie singer Harry and guitarist Stein accepted a CLIO for music. The crowd gave the duo a standing ovation after it watched a montage of commercials using the band’s music.

“I’m here to say we have new music,” Harry deadpanned, as she grasped the shiny statuette.

After nearly two hours, it was finally time for Seinfeld, who closed the event with an acceptance speech for his honorary CLIO that poked fun at the advertising industry.

“This is the award they give you when they don’t actually think you can win one, but they think you’ve done a pretty good job and seem to have been around for quite some time, and that’s how I got it,” he said with CLIO in hand. “I love advertising because I love lying, and in advertising, everything is the way you wish it was. I don’t care that it won’t actually be like that when I actually get the product being advertised because, in between seeing the commercial and owning the thing, I’m happy, and that’s all I want. Tell me how great the thing’s going to be — I want it. I don’t need to be happy all the time. I just want to enjoy the commercial. I want to get the thing. We know the product is going to stink. We know that because we live in the world, and we know that everything stinks. We all believe: ‘Hey, maybe this one won’t stink?’ We are a hopeful species — stupid but hopeful.”

His circuitous meditation on materialism drew laughter from the audience, and then he took it a step further.

“I think spending your life trying to dupe innocent people out of hard-earned earnings to buy useless, low-quality, misrepresented items and services is an excellent use of your energy because a brief moment of happiness is pretty good,” said Seinfeld. “Thank you all for this great honor and for all your great work. I hope it makes you happy, as you have made me happy for these five minutes of my life, which will last until I get to the edge of this stage and it hits me that this was all a bunch of nonsense.”