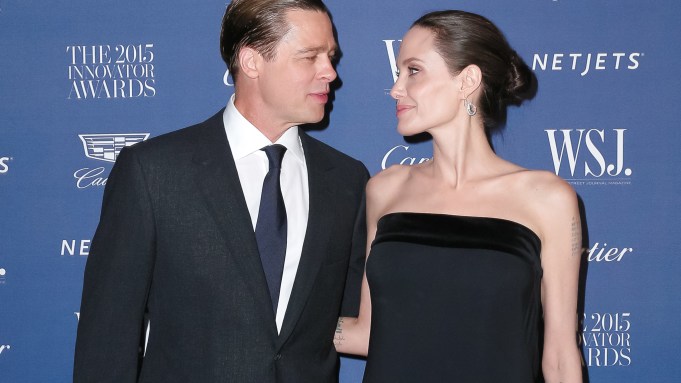 Contemporary artist Francesco Vezzoli presented Miuccia Prada with her award, referring to her as his best friend.

“She’s human. We talk about love all the time,” Vezzoli said. “She finds my love life incredibly boring, she finds my sex life even more boring. What else can I say? She’s the best friend I could really have.”

At the same time, the artist spoke about Prada’s power and genius in fashion.

“On another planet, in the city of Milano, lives Mrs. Prada, or La Senora, as we call her. She’s one of the most famous, acclaimed, respected, feared, adored designers in the world,” he said, listing Prada’s honorific titles, such as a creative genius, the game-changer, a feminist, a surrealist, even a Communist.

“Who deserves this award, Miuccia or Mrs. Prada?” Vezzoli said, as Prada looked on.

A humble Prada came to the stage, and speaking quickly as she clutched the bronze rectangular award, she said: “What can I say after all that? I was thinking these days, why is it so moving to get an award? Probably not just because it’s a formal act, but in a way, it’s to prove that what you’re doing makes sense, and real communication and exchange is possible through your work and your ideas. And, that is very consoling.”

Later, a pink-haired Leto gave a thoughtful speech about Slack cofounder and chief executive officer Stewart Butterfield, teasing him for changing his first name from “Dharma.”

“Bro, if you’re born Dharma, you stay Dharma. OK, I mean, with a name like that, you get to cut the line at Burning Man,” said Leto, before detailing Butterfield’s journey as a sort of “phoenix,” in which he transformed past struggling companies into start-up success stories.

“Distinguished movie stars, supermodels and fashion designers, we are a long way from San Francisco,” said Butterfield, before making eye contact with De Niro, who sat at a table by the stage.

“On the plane on the way over here, I watched ‘Godfather II,’” he said. “The part where you kill Don Fanucci — I liked that.”

Butterfield’s fawning comment didn’t sit well with De Niro, who came to the stage later to present Jolie Pitt with an award.

“I don’t give a f–k who you are,” said the actor, who appeared offended by Butterfield’s opener, suggesting that the room was populated with fancy people.

That tense moment was followed by laughter, and then a less exciting speech about De Niro’s experience working with Jolie Pitt, who would close out the night thanking her children, whom she referred to as “innovative.”

“All of us here tonight are being honored because the little kid in us didn’t go away,” said Jolie Pitt. “We cannot put a price on the value of the innovative spirit.”