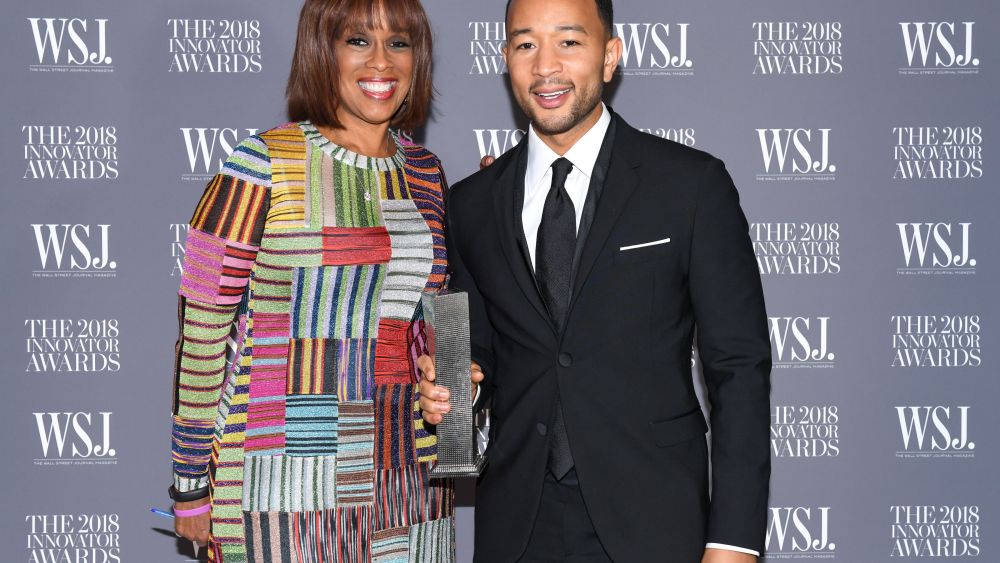 Although WSJ. magazine’s annual Innovator Awards aims to celebrate the least ordinary among us, John Legend closed out a flashy New York evening with a performance of his hit “Ordinary People.”

The room — full of fashion industry types, models and celebrities, including award recipients Ralph Lauren, Jonah Hill, Phoebe Waller-Bridge and Ruth E. Carter, and their chosen presenters Virgil Abloh, Channing Tatum, Cara Delevingne and Lupita Nyong’o — murmured and swayed along to the song that ironically applied to many of them. Legend, who received an award presented by Gayle King, performed two other songs, including a rendition of Nina Simone’s “Don’t Let Me Be Misunderstood,” after noting that he was the only one in the room “who has to sing for my supper tonight.”

His wife Chrissy Teigen, who presented an award to the entrepreneurial chef David Chang, watched from the back. King, for her part, admitted she agreed to be there simply because Legend asked her, noting she wasn’t even sure what event she was at, coming straight off two nearly sleepless days covering the midterm elections. “I didn’t even know what this was, guys, I walk in this room and it’s a glamorous night like this — I saw you, Jonah,” King said, listing off other notables she could see. “Only in New York.”

Hill, who received an award for his first time writing and directing a film with the impending “Mid90s,” joked after Tatum handed off the award: “Who would’ve thought that me taking the job as your oil boy in Tampa all those years ago would have brought us to such heights.” After a few more jokes, he turned earnest, saying he was grateful to have had the opportunity to learn from so many people over a relatively brief career. “The second you focus on the results, you’re lost — the process is the reward.” He made his way back to his table, where an Olsen may or may not have been using an e-cig between presentations, but Tatum left early, his seat taken by Karlie Kloss.

Speaking of process, Nyong’o noted what an important role a costume designer like Ruth Carter, who held that role for “Black Panther,” has in the making of a film. She said the “experience immediately became exciting” when Carter’s designs took shape, even though they were altered and tweaked right up until shooting. Carter, a frequent collaborator of Spike Lee’s with 30 years of movies on her résumé, said, “Really, my entire career has been dressing superheroes.”

But standing ovations were saved for Agnes Gund, a philanthropist who’s been recognized repeatedly for her gifts (it was her name on the lobby entrance to the awards dinner held at the Museum of Modern Art), and Ralph Lauren, who’s 50th year in business has also been much-feted.

Gund took her time at the podium to remark that last year Americans set a record for charitable giving of $410 billion and said this penchant for charity “is one of the facts about this country that makes me proud.”

The idea of America also seemed to rile the crowd for Lauren, who was introduced by an apparently indefatigable Abloh as the man who created the idea of a lifestyle brand and “showed us what fashion can transcend to be.”

Lauren, who got the most sustained applause and had to just start talking for people to be seated, put a personal theme on the idea of transcendence. “All these accolades and I’m sitting here, in my chair — I’m the luckiest man in the world, because I really could have been just running an elevator.” He also took up the role of elder statesman addressing his fellow recipients to tell them “you’re all doing great” and to explain that when he was starting out with his fabled ties, “I didn’t know what innovation was — my life was innovation.”

“Innovation is really passion and love and caring about what you’re doing; it’s your battle and your fight,” Lauren said. “After 50 years I have really loved the work I do and I’ll continue, hopefully as long as I can and I can still play basketball, so I’m OK.”