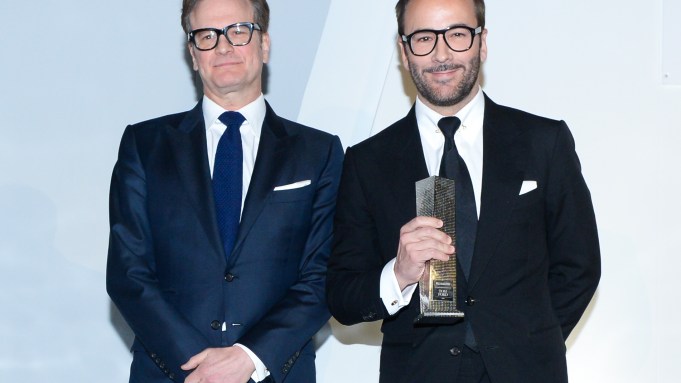 THE SHOW MUST GO ON: The timing of WSJ Magazine’s Innovators Awards, which was held Wednesday night at the Museum of Modern Art in New York, was less than ideal.

Hours before the event kicked off, staffers at The Wall Street Journal got a memo from editor in chief Gerard Baker about consolidation and layoffs at the paper.

Even though the magazine was spared from the cuts, the mood at the star-studded party was a little less exuberant than in prior years. While some Journal employees attending the event lamented the state of the media industry, others reveled in the party, which welcomed the likes of Tom Ford, Naomi Campbell, Alexander Wang, David and Lauren Bush Lauren, Colin Firth, Ai Weiwei, Melinda Gates and Abel Tesfaye (aka The Weeknd). Partygoers would be ushered onto the second floor of the MoMA for a seated dinner, in which presenters would honor seven “innovators” across the categories of architecture, art, design, film, food, music and philanthropy.

The night kicked off with Es Devlin’s acceptance speech for the design award. The stage designer, who is known for her multimedia sculptures for opera, dance, film, theater, runway shows and concerts, spoke of how she finds inspiration.

“I like being in the space in between, at the juncture, at the elbow, in transition,” she said.

Daniel Boulud would later present the food prize to the duo behind Eleven Madison Park, chef Daniel Humm and restaurateur Will Guidara. Snohetta designers Craig Dykers and Kjetil Traedal Thorsen would nab a prize for architecture, while Campbell would present Tesfaye with the music award.

Those longer speeches contrasted with Ai Weiwei’s remarks, which consisted of four words: “Thank you, thank you.” Ai, who won the award for art, lingered on stage, taking selfies while posing for photographs.

Later that night, the audience watched a short video narrated by Ford on his philosophy on fashion versus film.

“I enjoy the speed of fashion. Film is timeless,” Ford said. “I keep film and fashion completely separate. I think that’s maybe because I’m overconscious of being taken seriously as a filmmaker.”

Firth, who starred in Ford’s “A Single Man,” presented him with the prize for film.

“He’s the master of the visual image. He’s the king of sex,” Firth said of Ford. “I’m here to expose him. I’ve seen the king of sex at 5 a.m. after a 19-hour night shoot and I’ve seen him the day after. I’ve seen that over and over again, and I’ve waited for the cracks to show, for the shirt to crease a little, for the stubble to grow. I’ve willed it. The shirt doesn’t crease. The mind stays focused. The voice stays calm.”

Firth shared moments that evoked Ford’s “outrageous side,” which included his ability to mimic Diane von Furstenberg, replete with an arched back.

The designer arrived on stage asking if the audience had ever seen von Furstenberg in that pose.

“It’s amazing,” he said, craning his head back. “She can still do it.”

Following Ford’s speech, Gates came to the stage to accept the philanthropy award.

“My heroes are the unsung people,” she said. “My form of innovation is optimism. It is optimism that we can take all the creativity and the ingenuity in humankind and lift up others who aren’t as lucky as us to live in New York or Los Angeles or Seattle, to lift up humankind.”