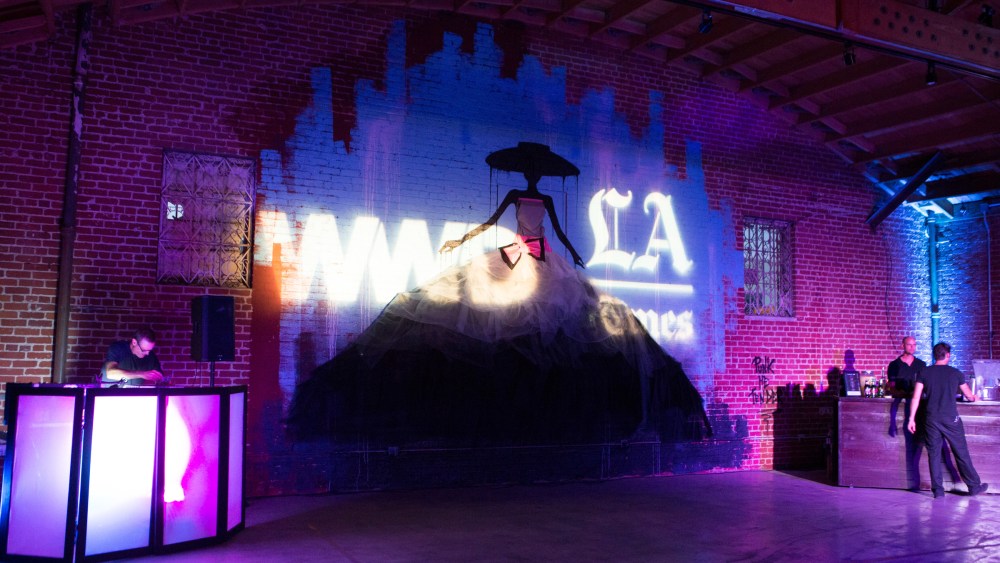 The Los Angeles fashion scene is heating up so much that a variety of designers, retailers and executives braved the 85-degree heat smothering the city well after sunset Monday to celebrate the new partnership between WWD and The Los Angeles Times. The partnership involves distribution of select WWD print editions throughout the year to high-income L.A. Times readers.

Feedback on the first syndicated issue under the deal has been positive, said Chris Argentieri, general manager of the Times’ California News Group. It could open the door to the group exploring options in other verticals, he said.

“We would like to,” Argentieri said. “We don’t [have any deals in the works] in this exact form, but in this always-on world we need a lot of content to satisfy our audience and we can only produce so much ourselves so, yes, we would be interested in talking to other people in individual verticals that do as good a job as WWD does in fashion.”

Market and L.A. Fashion Week enveloped the evening’s festivities and drew guests — ranging from locals Heidi Merrick, Christos Garkinos and Newbark’s Joe Krafka to representatives from Paris-based Les Lunes — downtown to The Container Yard for fashion-themed cocktails, Korean-style tacos and beignets. None needed convincing about the importance of the Los Angeles market, which has increasingly attracted designers from other cities.

“L.A. is a huge brand,” said Sara Stein, who can attest to the demand from Japanese customers for the locally produced accessories and home decor made by Sisters of Los Angeles, which she started with Karen Alweil and Barbara Bestor, the popular architect and author of “Bohemian Modern: Living in Silver Lake.” “Everyone wants L.A.”

People from around the world are tapping the West Coast sensibility for ideas, commerce and beauty, pointed out Nasty Gal chief executive officer Sheree Waterson.

“It’s a vortex,” she said. “There are so many small, creative communities that have come together to create really expansive [groups] — whether it’s art, music, fashion or sports. It’s all here right now.”

The city’s entrepreneurial spirit encouraged Omar Reader to cofound a men’s brand called Reader x Fields, which has begun stocking its clean basics at retailers such as Maxfield and Ron Herman. “That’s what we’re all about — we’re about L.A.,” he said.

Even the evening’s venue, in the heart of the city’s Arts District in downtown, seemed particularly apt to represent the intersection of different creative minds.

“With retail being in a little bit of a hiccup, L.A. really represents a lifestyle,” said Vanessa Chiu, show director of Axis and Agenda WMNS. “That mind-set — you look great, you take care of yourself, you’re fashion-forward, you’re living the dream and it’s the adventure lifestyle — that all basically cross-sections here in Southern California.”