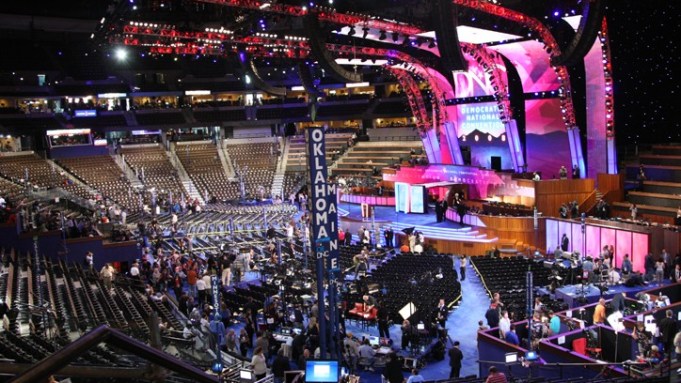 Throughout our whirlwind, never-ending coverage of the 2008 election, WWD has reported on the candidates with a keen eye on the issues most important to the fashion industry.

Fashion Trends Toward Obama in Presidential Race
Blue is the hot color for the fashion industry this election season.

Obama to Be Tough on Trade
Don’t expect Barack Obama, if elected, to be soft on countries that deliberately violate global trade rules.

China Policy Looms in Presidential Campaign
A big question for industry executives this election year is not necessarily whether the next president will bring change to Washington, but rather how he will address the trade relationship with China.

Democrats Aim for Balance on Trade
Democrats aim to strike a balance between free and fair trade principles in their 2008 party platform that was set to be adopted Tuesday night at the convention.

Industry Eyes Biden’s Trade Stance
The industry is scurrying to determine whether Biden will live up to his internationalist reputation and be a forceful proponent of free trade, or will follow the skepticism of it exuded by Obama on the campaign trail.

Pocketbook Issues Return to Fore
issues such as the flailing economy, jobs, taxes and global trade are likely to rise to near the top of the stump talk.

Now the GOP’s Turn
The Republican National Convention hung in a pall on Monday, in sharp contrast to the festive celebration party leaders had planned and to the dynamic convention Democrats staged last week in Denver.

Democratic Convention Hits the Mark
Party loyalists and political observers believe the Democrats delivered on their messages of change and helping the American worker and middle class in what is generally considered a highly successful convention.

A Look at the Issues
The presumptive presidential nominees, Sens. Barack Obama (D., Ill.) and John McCain (R., Ariz.), have unveiled economic policy plans in recent weeks. The following is a snapshot of some of their policies.

Political Parties Prepare Their Parties
In the most wide-open presidential election in 80 years, with no incumbent president or vice president in the race, the conventions are attracting more attention — and star power — than in decades.

Democrats Set Convention Lineup
The plight of the American worker and the middle class will be a central theme at the Democratic National Convention.

Obama Press Tour
Barack Obama and family will be making the rounds on even more covers once the September issues of the monthlies hit newsstands.

Election 2008: The Fashion Trail
As their husbands paced the stage at Nashville’s Belmont University Tuesday evening, Cindy McCain and Michelle Obama took the opportunity to show their true — or rather, patriotic — colors.

Ladies in Waiting
The presidential campaign carries on, and the candidates’ wives continue to make their fashion preferences known.

Style on the Stump
A presidential election isn’t exactly the forum for flashy or experimental fashion, but this time around, the sartorial choices of the prospective first ladies — and vice president — have grabbed the public’s attention.

The Politics of Style
With the race for the White House in full swing, WWD wanted to see how Michelle Obama and Cindy McCain stack up against first ladies of the past.

Sarah Palin’s Style
There’s still a woman in the presidential race — and her style is more Patagonia than Prada.


Zac Posen Gets Out the Vote…
Voting has never been more fashionable — especially if Zac Posen has his way.

Bobbi Brown on Life as a Delegate
Not only did Bobbi Brown do the makeup for Jill Biden, wife of Delaware Sen. Joseph Biden Jr., who accepted the Democratic nomination for vice president Wednesday night, but she has also had a role as a delegate from New Jersey at the convention.

Nolan and Tobias on Politics and Fashion
Designer Charles Nolan and his life partner, Andrew Tobias, treasurer of the Democratic National Committee, perfectly exhibit the union between politics and fashion.

Denver Dish
The fashion industry is leaving its mark on the Democratic National Convention this week.

Now These Are What We Call Mavericks
When news broke that the Republican National Committee spent almost $150,000 of campaign donations to buy clothes for vice presidential candidate Sarah Palin, there was no shortage of outrage.

Republicans Fete With Hagar, Buffet and Friends
The Sammy Hagar show Sunday at the club First Avenue here was thoroughly Republican. The men wore blue blazers and chinos. The women were disproportionately blond.

Goodbye, St. Paul
You pretty much know your nomination speech wasn’t all that great when even the conservatives supporting you decline to comment on its merits.

St. Paul Scoop
The Creative Coalition’s gala in Minneapolis was generally a bust. Though a listing in the National Journal’s Convention Daily promised a host of big celebrities, the best the event got in the end were Kerry Washington, Wendy Malick and Tony Goldwyn, according to a press release handed to journalists when they arrived.

Hoping to Hit the Gas
Coming off the high-octane Democratic National Convention last week in Denver, I expected the Republicans to at least put on an energetic, if more subdued, political show. But in the wake of Hurricane Gustav and the controversy swirling around the choice of Alaskan Gov. Sarah Palin as Sen. John McCain’s choice as vice president, all the pizzazz was sucked out of the room.

Low Wattage
The parties at the Democratic convention  were not exactly roof raisers.

Feeling Unloved
The Democratic convention has reached the point where journalists here are no longer sure whether it is America or the press that is tired of Obama.

The Pink Ladies Take Over
For a party that takes pride in its diverse swath of constituents, the Democratic National Convention has been surprisingly muted visually this week.

Democrats Debate Tactics V. Ideology
The opening of the Democratic National Convention has been like the main stop on the book tour of every left-wing pundit who has done battle on a crossfire television show.