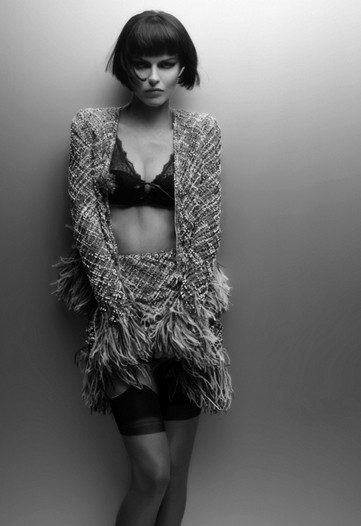 HIGH CAL KARL: Look out Pirelli. Karl Lagerfeld has been moonlighting as a calendar photographer. His effort — commissioned by the Italian edition of Marie Claire and to be sold along with the January issue — features Czech model Eva Herzigova decked out in couture and portraying a dozen different characters. “It’s about how one girl can be every woman. It’s an idea I love,” said Lagerfeld, who noted he has worked with Herzigova for almost two decades. “We did the shoot in one night, from 8 in the evening until 8 in the morning.” The calendar is a first for the Italian edition and is slated to hit Italian newsstands — and select bookstores abroad — on Dec. 16, packaged in a black box. Editor in chief Antonella Antonelli plans to unveil the 24-image calendar on Dec. 11 at a cocktail party at the Palazzo Clerici. — M.S.

THERE IS ONE DEPARTURE: Bernd Runge, a top executive at Condé Nast International, is leaving the company, according to a memo by Condé Nast International chairman Jonathan Newhouse. Runge has been serving as president of Condé Nast Germany, as well as overseeing the New Markets Europe/Africa division and holding the title of vice president, Condé Nast International. Newhouse wrote, “He recently informed me of his decision to take a break and step down at the end of this year. With sadness and understanding I accept this development.” Newhouse added, “There is no one else like him.” Runge, 47, directed the company’s expansion into Russia with the launch of Russian Vogue, and oversaw moves into several other countries, for a total portfolio of 26 magazines in 10 countries. A spokeswoman for the company said Runge would not be replaced at this time, and that his duties would likely be assumed by existing management. — Irin Carmon

NOT A SURPRISE: After much speculation, Miu Miu on Tuesday confirmed that Katie Holmes is the new face of the brand’s spring ad campaign that breaks worldwide in January when it will appear in February titles. The brunette actress was shot in a New York studio by duo Mert Alas and Marcus Piggott, but details on the mood of the images were unavailable. Holmes fills the edgy wedges of peers such as Kirsten Dunst, Lindsay Lohan, Chloë Sevigny and Drew Barrymore. — Alessandra Ilari