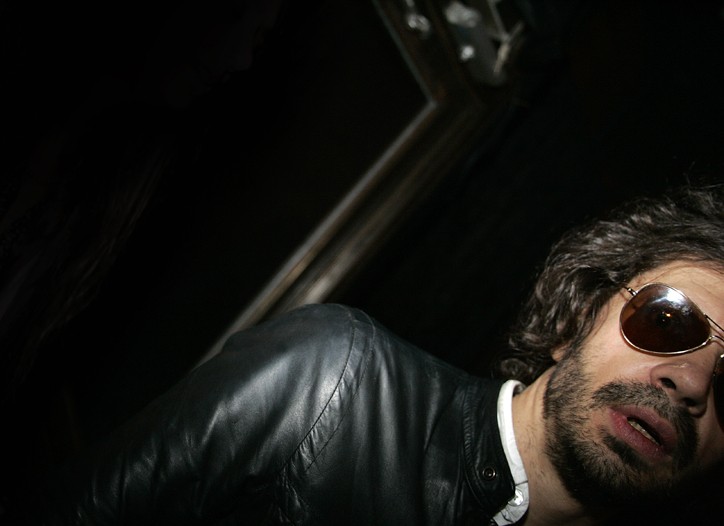 He’s weary after the social and professional grind of New York Fashion Week and lamenting the democratization of fashion on the Internet. “This is why the industry is going in a vulgar, common, bad direction — because of the direct access that doesn’t come with an education, reflection, understanding,” Zahm said in his thick French accent, reminiscent of Serge Gainsbourg.

Wearing his signature retro look (tinted aviators, fitted jeans and a leather jacket) and famous for his roué Seventies lifestyle, he seems like a natural enemy of fast fashion and its weapons, blogging and tweeting. “It is vulgar and common,” he repeated, before pausing to answer a call from Yves Saint Laurent designer Stefano Pilati.

Fashion for Zahm is deeply personal, as is Purple Fashion, the title founded in 2004, which has become as much a cult as he is. “I don’t want to accept it [fashion] the way it is proposed, and I don’t want to just be an instrument of this industry,” he said.

So how does he do that without becoming a tool? Purple Fashion just breaks even — before it pays its staff and such mundane matters as the lighting and heating bills. It’s no InStyle or Vogue in the money machine department, that’s for sure. Yet Zahm is, in his way, as feted and courted as any editor in chief of a major, and more profitable, fashion title. He’s hip. He’s plugged in. He’s French.

And he trades on that. Purple Fashion is only a slice of the world that is Olivier Zahm Inc. He survives by capitalizing on every opportunity thrust his way, from the magazine to working with brands. Zahm is one of those who has defined a new model for magazine publishers and editors, a corner of the fashion and lifestyle media that is not only surviving after the Great Economic Meltdown of 2008 but even thriving. Sure, editors of major circulation titles at Condé Nast and Hearst are as responsible for revenue these days as their publishing brethren, but there’s at least still the myth that the two sides are distinct and separate. Not so at these niche titles: The editor and the publisher are openly one and the same, which in a way is almost more liberating because advertisers know exactly the vision they are buying into. No brand buying an ad in Purple is expecting a demure, understated environment — or even a fashion credit. They’re there because Purple is cool; that’s it.

Zahm is part of a fraternity that includes mini moguls such as Monocle’s Tyler Brûlé (the pioneer of the model of editor as businessman) and Jefferson Hack of AnOther Magazine and Dazed & Confused, as well as niche darlings Jop van Bennekom and Gert Jonkers, who publish Fantastic Man.

Each title is a creation of its founder’s will, and their visions reach the market unfettered by the constraints of the mainstream publishing world. The key is they cannot live on vision alone; they all have to do other projects to support the magazine. For instance, Brûlé also makes money through consulting agency Winkreative. The business provides brand strategy, advertising, packaging and Web site design. Van Bennekom and Jonkers often rely on favors from friends. Hack juggles several projects, from planning a music festival in Britain to working on a cultural festival in Istanbul. And Zahm takes on three side gigs a season, ranging from art directing to photography to, during the past year, producing a corporate magazine for Chanel.

Which is not to say it’s ever easy. Like all publishers, indies must adapt to the challenges of the 21st century, from new technologies to dealing with growing paper and production costs — but without big corporate pockets to pay for it. With a circulation per issue of just 60,000, at a cost of $35 each, Zahm’s magazine reaches a limited audience. All independent publishers cut corners wherever they can; Zahm, for example, doesn’t pay for an apartment when he’s in New York, thanks to his friend André Balazs, who comps him a room at The Standard. All of the indie titles pay very little to contributors, the rationale being the exposure can lead to bigger projects and advertising contracts.

Zahm’s personal satisfaction comes from fulfilling his intellectual curiosity with pieces about artists and philosophers, juxtaposed with fashion spreads often involving nude models. He claims this style of presenting fashion is not about sexuality. “Nudity is a white canvas,” said Zahm, comparing it to a gallery full of white walls. “I’m trying to capture something bigger and change my own vision of life at the moment and change reality a little.” In the magazine, here’s how he put it: “Purple Fashion isn’t a sex magazine hiding behind the facade of fashion. We prefer to think of nudity as Roland Barthes did, that it’s the Degree Zero of style.”

For those who frequent fashion blogs and the party pages, Zahm is probably best known for his nightlife pursuits, spent with beautiful women at the Top of the Standard and friends such as Balazs or André Saraiva, owner of Le Baron nightclub in Paris. It’s a life made possible by his involvement in Purple Fashion, and one could argue his life and the magazine have become one in the same. It’s a virtuous circle — people like the magazine, want to meet or hire Zahm, he uses the money from projects to support the magazine, more people hire him and on and on it goes. The same works for Brûlé, Hack and the others.

“When we go to a party, it’s not about who we are. It’s about this fictional, glamorous side. We are inventing these lifestyles. If you’re not in the mood to play that game, you might as well stay home and read,” Zahm said, adding that he’s frustrated the press has characterized him, as a result of the extravagant lifestyle he chronicled quite intimately for two years on the blog Purple Diary, as a sex maniac.

“I like to flirt with women, I like to meet new people. This is a mirror of my life and the life of the people who work and are featured in the magazine,” said Zahm.

The blog was an experiment in showing all sides of his life, sans filter, and the initial effort was moderately successful. The diary continues today, but not in the same manner. “I was pushing the limits of what’s private and public, but it wasn’t for me,” he said. “It ended badly with my girlfriend and made me reevaluate the necessity of a certain privacy. I was lovesick for six months.”

But it wasn’t enough to turn him off the Web. In two weeks, he’ll dive a bit deeper online with the launch of a new Purple Web site, which will include the infamous Purple Diary and content from the magazine. Also in the works: an online boutique and television projects. Of all the upcoming work, the Web site presents the biggest dilemma, especially regarding his view of posting fashion to the Internet. “Yes, I’m concerned, but I’m participating in the fashion industry and at the same time refuse to participate,” he said.

Zahm’s business plan bares striking similarities to those of his friendly competitor across the pond — Brûlé, the Canadian-born, always-on-message magazine editor, who, surprisingly, said he still makes most of his revenue from Monocle. The magazine, vastly different from Purple, is a mix of global news and political coverage. There is also a Web site, TV programming on Bloomberg, a free weekly audio podcast on iTunes and five stand-alone Monocle stores in cities such as New York, Tokyo and London. “We started these four years ago, and Condé Nast is just doing it now,” boasts Brûlé. “Retail, I can imagine, is very cumbersome for big companies to get into, but for us it’s easy to say we’ll sign a lease and put in a competitive offer.”

Brûlé charges $110 for a yearly subscription to Monocle, which had a total circulation of 63,007 for the second half of last year. He said the company entered the black in 2010. “Print is still core to what we do,” he noted. “The Web is great, but advertisers are still really fighting to be on the outside back cover or opening spread.”

Having said that, he’s interested in forming a coalition of independent publishers to compare notes and address the problems they all have in common, such as distribution practices. He wants to reach out to Hack and the duo behind the men’s biannual Fantastic Man. “I’m impressed with what Brûlé has been able to accomplish,” said Jonkers from his office in Amsterdam. “He’s in between an independent publisher and Condé Nast.”

Jonkers said Fantastic Man, which began publishing in 2005, has a circulation of 82,000 and is profitable. “We just wanted to reinvent the men’s wear magazine and have something we liked to read,” he said. “Personal style is more important than the latest trends, so that’s what we started with. We deliberately started with a very thin magazine so people could carry it around — roll it up and read it on the train.”

The latest issue has Bryan Ferry on the cover, and contributors include Alix Browne, Glenn O’Brien, Juergen Teller and Inez van Lamsweerde and Vinoodh Matadin. “It’s quite hard to give a concept of the magazine. We just want it to be interesting to us and good,” explained Jonkers.

That phrase could have come from the mouth of any of the aforementioned publishers as they each plow their niches and take on side projects to keep their visions alive. Back at Zahm’s loft office near Union Square, he contemplates what sets Purple apart from the other titles. In between sips from a bottle of Corona, he tries to explain his magazine.

“It’s a bit more intimate and narcissistic and glamorous,” Zahm said — words that could be used to describe him. Then he added, “I think we are all doing what we think is right.”

And adapting as they go.