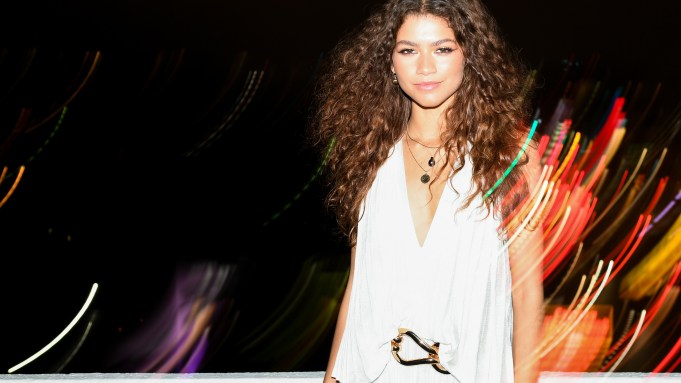 Even the first rain Los Angeles has seen in months couldn’t dampen the enthusiasm Zendaya has for the renowned artist Simone Leigh.

“I love meeting other black creatives and supporting each other and this was very special,” Zendaya, whose fame has grown with the popularity of HBO’s “Euphoria,” said of the cover shoot she did earlier this year for Vice-owned Garage magazine. The dramatic photos were one of the very few magazine moments this year that got people in fashion media talking and cooing — no wonder as Zendaya appears in one shot in a 12-foot-high skirt made by Leigh.

“I walked into the set and there was this thing — even touching it I’m thinking ‘This Is in the Guggenheim!’ I was so scared to touch it,” Zendaya recalled as a mix of guests for dinner filled up the penthouse deck of the Chateau Marmont.

“I was just in awe the whole time of this massive work that she does and the fact that I was able to interact with it and [Simone] is so cool, so cool,” Zendaya added. “This is definitely one of the shoots I’m most proud of.”

For Leigh, wearing a full-length tiered dress by emerging designer Christopher John Rogers (this one to be exact) the shoot for Garage marked the first time she’s worked with a magazine on a photo shoot. And it’s very possibly her last. Since the biannual magazine released the issue in September, Leigh said she’s been fielding a lot of interest from other magazines and for commercial work, but she has no plans to accept any offers.

“I do get approached a lot and I don’t think I’m going to do that — it’s not really my work,” Leigh said. “I wear so many hats already I cant expand and I’m really fighting for time in my studio.”

She made an exception for Garage, however, despite the shoot happening in the same 30-day span that she was staging a solo show at the Guggenheim, a sculpture show on New York’s Highline in Chelsea and an appearance in the Whitney Biennial. First, because she felt like she “could learn something” with 30 years of staging all kinds of shows and never having done a magazine shoot and second, because of Zendaya, whom she’d never met.

“I really respect her work…she has such a unique place in a lot of different aspects of my life. She comes up,” Leigh said. “I don’t know how it’s played out in popular culture, but in the art world and with black feminists she’s really groundbreaking because she does these roles that have never really been given to black women before. She’s been able to transcend a lot of staid and kind of stale ideas of black womanhood.”

But in fact, the Garage shoot almost didn’t happen. Zendaya was on location shooting New Orleans and was unable to get a planned flight to New York for the one-day shoot due to weather.

“I don’t even know what would’ve happened if she didn’t make it,” Garage editor Mark Guiducci said, stressed at the thought months later, considering the issue proved the most successful of his two-year tenure. “But we got her there.”

Tig Notaro Has ‘No Idea’ Who Anna Wintour Is