A suitor from the Gulf region looks poised to rescue Christian Lacroix from administration. 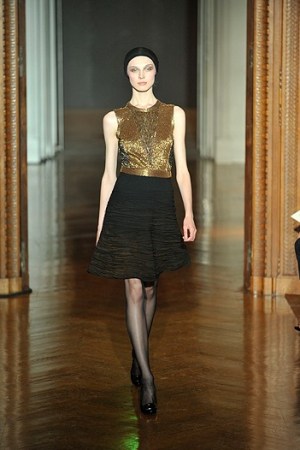 Retail M&A Update: Is It Time to Sell?

PARIS — A suitor from the Gulf region looks poised to rescue Christian Lacroix from administration.

This story first appeared in the October 1, 2009 issue of WWD. Subscribe Today.

As Paris Fashion Week shifts into high gear today — with Lacroix absent from the calendar for the first time in decades — an Ajman sheikh has submitted a bid that would preserve Lacroix’s current operations, including couture.

Nicolas Topiol, Lacroix’s chief executive officer, confirmed the Paris administrator received an offer from Al Hassan Bin Al Nuaimi that it deemed satisfactory. It is understood contracts were not yet signed Wednesday, but could be as early as today.

“It’s a procedure. It still needs to go through the court,” Topiol cautioned.

A deal would see Florida’s Falic Group cede majority control of the fashion house after a costly drive to move upscale and a steep drop in sales drove it deeply into the red. In May, the company was forced to seek protection from creditors, reflecting the vulnerability of wholesale-dependent brands amid a sharp downturn in luxury spending.

It is understood Al Nuaimi would retain all of Lacroix’s 124 employees and inject 70 million euros, or about $102 million at current exchange, into the cash-strapped firm.

Falic had committed to fund operations through the administration period.

“As a Latin guy, I’ll believe it when it happens,” Lacroix told WWD on Wednesday. However, he added, “I feel confident,” particularly because the approach came to the designer directly via his XCLX company, through which he does a variety of projects, from signature hotels and opera costumes to tramways for French cities. “They understood my true work: crossing fashion, art and design,” Lacroix said.

The designer had worked in tandem with Italy’s Borletti Group, parent of Printemps and La Rinascente department stores, on a possible bid. However, on Wednesday the group said it was withdrawing from the process. According to sources, other confessed suitors, including Bernard Krief Consulting, also failed to submit final offers before Tuesday’s deadline.

In a statement, chairman Maurizio Borletti held out hope the Ajman bid would prevail and reiterated his belief in the “strong potential of the Christian Lacroix brand.”

Ajman is the smallest of the seven emirates comprising the United Arab Emirates. Al Nuaimi could not be reached for comment Wednesday.

The law in France favors continuation plans over liquidations. Falic Group had proposed a restructuring plan that would see the workforce cut to 12 people, effectively reducing the house to a licensing operation. Lacroix has pacts for men’s tailored clothing with Sadev, men’s shirts and knitwear with Rousseau, wedding dresses with Rosa Clara and scarves with Mantero. A perfume license with Paris-based Inter Parfums SA is set to expire next year.

Lacroix’s bankruptcy filing imperiled one of France’s most acclaimed couturiers, whose pouf skirts and Baroque dresses were greeted with applause, yet failed to translate into a profitable business. Recently, annual losses at Lacroix ballooned to about 10 million euros, or $14 million, on revenues that have shriveled to an estimated 30 million euros, or $42 million.