The two are said to be in the midst of finalizing the transaction. 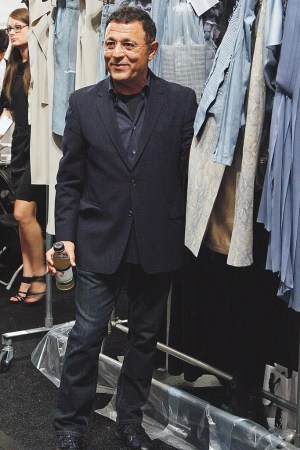 Boohoo Snaps Up Debenhams Brand, Website — but Not the Physical Stores

Birkenstock On the Block, CVC and Permira Circling: Sources

Elie Tahari is “this close” to finalizing a deal to acquire the Catherine Malandrino brand.

This story first appeared in the October 4, 2011 issue of WWD. Subscribe Today.

While last-minute negotiations could still derail the transaction, market and financial sources said the two are far along in the process and that the odds are in favor of a deal being completed within the next two weeks. Lawyers are said to be working on the purchase agreement this week. Possible terms of the acquisition were not immediately available, but it is believed to include some of the debt on Malandrino’s books.

Bernard Aidan, chief executive officer at Malandrino, could not be reached for comment by press time. A spokesman for Elie Tahari declined comment.

In a signal the two might be in talks, Catherine Malandrino attended Elie Tahari’s spring 2012 show last month during New York Fashion Week at Lincoln Center, although she herself did not show her collection this season, as the firm is in “transition.” The spring 2012 Malandrino collection was instead shown informally. The designer did stage an invite-only consumer fashion show for her namesake contemporary label on Fashion’s Night Out.

Financial sources said that while Malandrino is a well-respected brand — its contemporary collection, Catherine Malandrino, and runway line, Malandrino, have loyal client bases — the company’s operations are in need of an investor with turnaround expertise.

Malandrino has been looking for an investor since late last year, and in December hired Los Angeles-based Sage LLC as its investment banker. While Malandrino has had discussions with several parties, for a while it looked like it might be acquired by Kellwood. Market reaction to the possible acquisition was favorable, given Kellwood’s operating expertise. Those discussions got serious in May, but talks broke off about two months later.

Tahari and former business partner Andrew Rosen co-founded Theory in 1997. In 2003, the two sold the firm to Link International, Theory’s Japanese licensee, and Fast Retailing Co. Ltd., the owner of the Uniqlo brand. Rosen retained 11 percent of the business, while Tahari sold his share. In 2005, Theory went public on the Tokyo Stock Exchange, and that spawned a lawsuit by Tahari against Rosen and others alleging breach of fiduciary duty and unjust enrichment, among other claims, in a state court action in New York. The majority of those claims were later dismissed.

Despite the legal battles, both the Theory and Tahari brands continue to do well on the contemporary floors of department and specialty stores, each carving out its own niche.

Rosen, along with John Howard of private equity firm Irving Place Capital and 18 others, earlier this year took a stake in Proenza Schouler. The Rosen and Howard stakes were personal investments. Rosen has similar investments in Alice + Olivia, Gryphon and Rag & Bone.

Some say that Rosen’s growing investments might be spurring Tahari to make a few of his own.

Tahari tried to acquire upscale specialty retail chain Barneys New York in 2004, but was outbid by The Jones Group Inc., then known as Jones Apparel Group, which paid $400 million. Since then he’s invested in the expansion of the Tahari brand.

Tahari last year embarked on an initiative to raise his firm’s global profile, which includes freestanding stores internationally, as well as shops-in-shop within key retail sites globally. Tahari is also growing its wholesale presence in men’s wear and the accessories businesses.

The hope is to reach $1 billion in revenue in the next few years. Wholesale volume for Tahari is more than $500 million, which includes the Tahari ASL suit business. Men’s is about 15 percent of total volume, market sources said. Elie Tahari Ltd. last month inked a multiyear licensing deal with Tandy Brands Accessories Inc. for women’s belts.

An acquisition of Malandrino, which has an international presence, could further serve those goals.