The fashion group's initial public offering is expected in the first half of the year.

MILAN — Elisabetta Franchi is expected to be the first fashion initial public offering of the year and, in a road show presentation on Monday, the namesake designer passionately told her life story to bankers and potential investors, explaining why the Bourse was the only possible means to ensure a long-term future for her company, founded in 1998.

A self-made woman, one of five children who grew up in dire financial straits and without a father, in one of the slides Franchi showed a drawing of a doll next to a photo of Angelina Jolie wearing one of her white, belted trenches. “I always had a vision, when I was six I knew what I wanted to do,” said Franchi, who throughout her one-hour-plus speech conveyed her determination, her sense of responsibility and focus. “I knew I wanted to dress women, it’s always been very clear in my mind.” Selling innerwear at a market in her teens, she “talked to and listened to women, developing a strong commercial sense. I knew what they wanted, and I know now what women want.”

Franchi emphasized this strong relationship with women, which has been further developed through social media and her 1.9 million Instagram followers. “First there was the product, then the logo — both highly recognizable — and now the entrepreneur has emerged,” said the designer, who is creative director of the brand.

Franchi characterized her designs as “feminine and sensual.” Her brand is positioned in the accessible luxury sector, one of the few — if not the only one — in that segment that holds a fashion show during Milan Fashion Week. In addition to Jolie, Lady Gaga, Chrissy Teigen, Eva Longoria and Jessica Alba are some of the other celebrities who wear her designs, but Franchi pointed out that she never pays anyone to don her looks. “I would never do that, it’s against everything I stand for,” she said, adding that the age of her customers spans from 12 to 60. 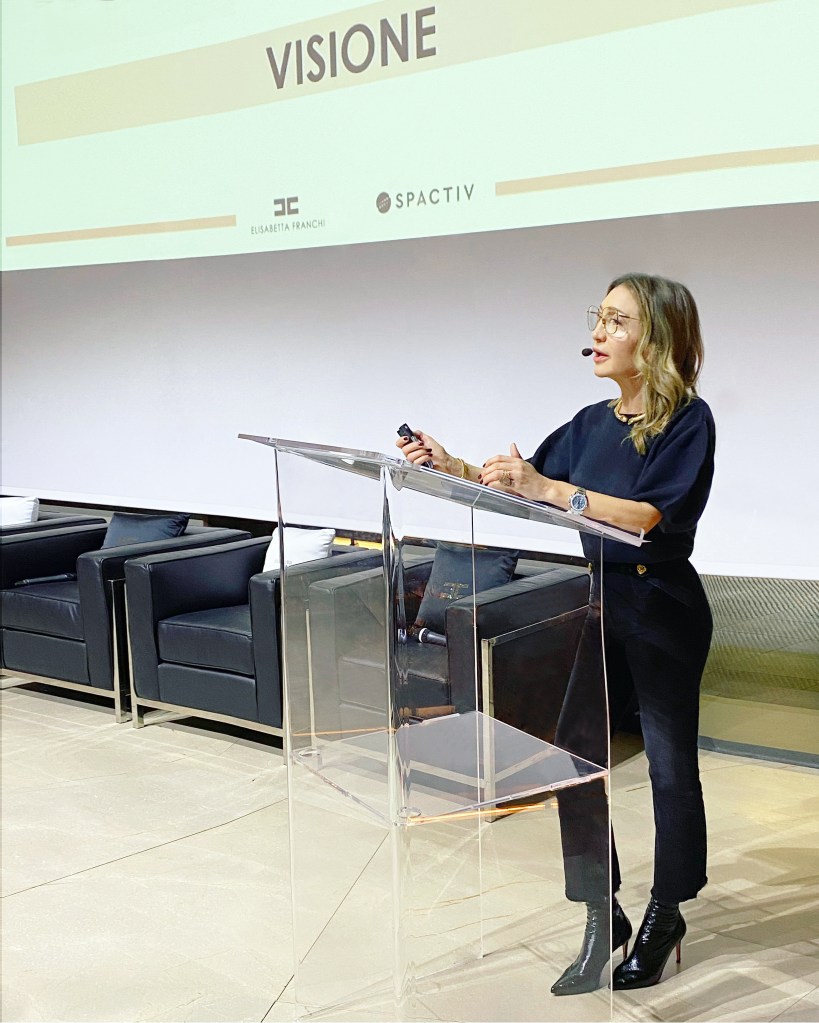 The IPO is expected in the first half of the year on the AIM segment for small caps of the Italian Stock Exchange, following a board meeting on Feb. 12, which is slated to approve the merger of Elisabetta Franchi’s parent company, Betty Blue SpA, owned by the designer, and Spactiv, listed on the AIM segment and promoted by Borletti Group and Milano Capital. Spactiv is a special purpose acquisition company backed by entrepreneur Maurizio Borletti; former Emanuel Ungaro chief executive officer Paolo De Spirt, and Gabriele Bavagnoli. The transaction values Betty Blue at 195 million euros.

The name of the publicly listed company will be Elisabetta Franchi SpA and the designer is expected to control a majority stake of between 58 and 65 percent. Mediobanca and UBI have been tapped as joint global coordinators.

Franchi said she chose a public listing “to see the brand have a future far ahead in time, with or without me. The Bourse is consistent with my path, to bring my vision to be accessible to everyone, it’s the most consistent thing I can do.” She also took the opportunity to lament the sale of many Italian brands to foreign investors, touting the beauty and uniqueness of Italian craftsmanship. “This is an extraordinary country and we are selling it. We should all form a united front because this is not a positive message,” she said.

Ceo Enrico Mambelli, who helmed brands including Gianfranco Ferré and Diadora, said the goal is to continue to grow in Italy, which accounts for 60 percent of sales, while strengthening and expanding the Europe, Middle East and Africa region, followed by a penetration in Asia, and then North America. Ready-to-wear accounts for 58 percent of sales and the idea is to expand the handbags and shoes categories, as well as to introduce new products such as eyewear and fragrances.

Revenues are expected to total 123 million euros in 2019, up 6.4 percent compared with the previous year. The compound annual growth rate in the 2016 to 2018 period was 6.5 percent and Mambelli said he expected a growth in revenues of between 4 and 5 percent until 2025. In 2018, net profits totaled 15 million euros. Earnings before interest, taxes, depreciation and amortization totaled 22.3 million euros.

Mambelli touted the flexibility and speed of Franchi’s supply chain, which allows stores to receive reassortments in two or three weeks, an additional boost to customer loyalty. Eighty-five percent of the brand is produced in Italy.

The company lists 82 boutiques, of which eight are outlets, and the label is available at 1,200 multibrand stores in 60 countries. The wholesale channel, including franchised and multibrand stores, accounted for 77 percent of sales in 2018. Mambelli said the plan is to open new stores and expand the wholesale distribution. A new unit just opened in Paris. The e-commerce channel is also growing very quickly, he said, up almost 130 percent in the 2017-2018 period.

De Spirt also trumpeted Franchi’s “phenomenal industrial machine,” saying that Spactiv was particularly impressed by this “element of strength, which allows quick re-assortments in stores.” The brand will be able to leverage synergies with Borletti Group and boost its presence in department stores, he believes.

In 2016, Borletti Group was part of a consortium that completed the acquisition of Grandi Stazioni Retail from Italian state railway company Ferrovie dello Stato Italiane and private investment vehicle Eurostazioni, providing exclusive rights to the commercial leasing and advertising spaces of some of the main railway stations in Italy.

Franchi was also keen to say that she adhered to the fur-free program of LAV, the anti-vivisection group, in 2012 and that 95 percent of her products are eco- friendly.

The company is based in Granarolo Emilia, a town outside Bologna.