Taking over the production of its timepieces will bring them into line with the brand's flagship products like furs and handbags. 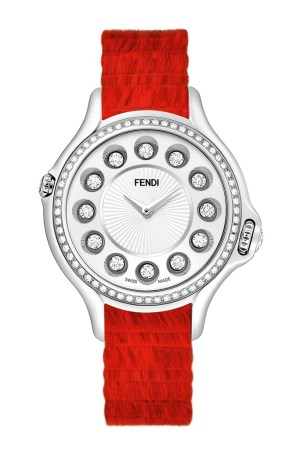 BASEL, Switzerland — Fendi has bought the remaining stake in its watch licensee Taramax SA and taken over the production of its timepieces to bring them more into line with its flagship products like furs and handbags, the firm’s chief executive officer Pietro Beccari revealed at the Baselworld watch and jewelry fair.

The new Fendi Timepieces division made its debut at the annual event with a striking stand designed by Antonio Monfreda and Patrick Kinmonth, featuring concrete walls encrusted with precious minerals.

Beccari said the brand, which raised its stake in Taramax from an initial 51 percent, had appointed Domenico Oliveri as ceo of Fendi Timepieces, effective Jan. 1. Oliveri joined Fendi as operations director in 2002, after stints at Procter & Gamble and Sara Lee Group.

Taramax founder Tom Venables will stay on as a consultant until the end of the year, Beccari added.

“It was time for us now to fly with our own wings and to build on the heritage and on the equity that was constructed in partnership with Tom Venables,” he said. “This acquisition of the company will allow us to have more control and more freedom to align everything in the marketing mix.”

The first step in the strategy is the launch of the new My Way watch, in parallel with the relaunch of the existing Crazy Carats, Selleria and Classico ranges, he said. Starting at $850, the My Way sits mainly at the aspirational end of Fendi’s timepiece offer, but it is also available in a full pavé version with a detachable white fox fur decoration on the strap that will retail for $13,000. Meanwhile, the Crazy Carats come with mink straps in white, red or deep blue in a limited edition of 50 each.

“The core message is alignment to the DNA of the brand, and alignment to the sophistication that we are trying to give with the other lines,” Beccari said. “We think that watches [are] not only a good business opportunity but [equally] an image opportunity.”

New advertising images with the tag line “Punctually unpredictable” will support the relaunch.