LONDON — Investors gave JD Sports a stamp of approval after the FTSE 100 company scooped up a second U.S. street and sneaker retailer in the space of six weeks.

Shares in JD Sports, which is majority owned by Pentland and among the most valuable companies on the London Stock Exchange, closed up 7 percent at 8 pounds after it revealed plans to purchase 100 percent of DTLR Villa, an athletic footwear and apparel streetwear retailer based in Baltimore for $495 million.

The announcement on Monday came six weeks after the U.K. sporting goods and streetwear giant bought the San Jose, Calif.-based Shoe Palace, which sells brands including Nike, Champion and Fila.

JD said it has entered into a conditional agreement for the acquisition of DTLR Villa LLC, which is currently majority owned by BRS & Co. and Goode Capital.

DTLR was established in 1982 and is an athletic footwear and apparel streetwear retailer. Originally named Downtown Locker Room, the company later re-branded as DTLR and, in 2017, merged with Philadelphia’s Sneaker Villa Inc. DTLR currently operates 247 stores across 19 states, principally in the north and east of the United States. 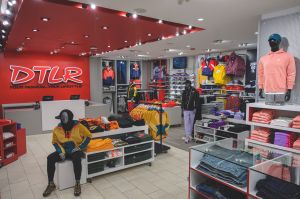 Inside DTLR Villa, the U.S. athletic footwear and apparel retailer that was purchased on Feb. 1 by Britain’s JD Sports.  Image Courtesy of JD Sports

In the U.S., JD Sports already owns sports retailers Finish Line and JD, and recently opened a flagship for the latter in New York City’s Times Square. It broke into the U.S. market two years ago with the purchase of Finish Line for $558 million.

Shore Capital analysts Greg Lawless and Clive Black said the latest bolt-on acquisition will enhance JD’s exposure to the north and east (markets) in the U.S., and complement Finish Line and Shoe Palace.

“JD is starting to scale in the U.S., and with its best-in-class retail systems, longstanding relationships with the brands, and tight cost and stock control, the U.S. division is starting to come of age in the largest sportswear market in the world,” the analysts said.

Lawless and Black said the acquisition also plays to the theme “that the largest retailers are starting to scale up using their balance sheets. We need to work through the impact of another acquisition on our forecasts, but highlight that JD’s investment case is starting to centre on the U.S.”

Total cash consideration for the acquisition is $495 million, of which approximately $100 million will be used to repay existing company debt, JD said Monday.

The deal is being funded from the group’s cash resources and existing bank facilities. Pending anti-trust regulations, JD and DTLR said they anticipate completing the acquisition before the end of March. 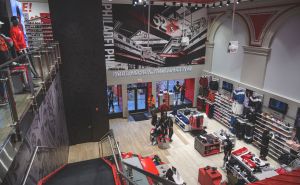 The DTLR management team is headed by Glenn Gaynor and Scott Collins, who will be continuing in their roles as co-chief executive officers. They will also be reinvesting a portion of their proceeds back into DTLR in exchange for a new minority stake of approximately 1.4 percent.

Peter Cowgill, executive chairman of JD Sports Fashion plc, called the deal a “milestone” in the group’s development in the U.S.

“Like Shoe Palace, DTLR pride themselves on the deep connection they have with their consumers and the active role they play in the communities that they serve. As such, we intend to retain the DTLR Villa fascia and its proposition. The acquisition of DTLR will enhance our presence in the north and east of the United States, and will be another important step in the group’s evolution.”

In December, JD Sports paid $325 million for Shoe Palace, which has 167 stores, more than half of which are located in California, although it also an e-commerce platform and an established retail presence in Texas, Nevada, Arizona, Florida, Colorado, New Mexico and Hawaii.

JD said that acquisition would “significantly increase” its presence on the West Coast “and strengthen its connection with Hispanic and Latino consumers, who represent a significant proportion of Shoe Palace’s customer base.”

In the U.K., JD Sports had a challenging year in 2020, from an acquisitions perspective.

The sporting goods and streetwear giant was set to buy fellow British retailer Footasylum when, in an unexpected move, the U.K. Competition and Markets Authority blocked the deal, saying it would lessen competition and be bad for the end consumer.

JD Sports remains locked in a battle with the U.K. competition regulator, and appeals to overturn the CMA’s decision are ongoing.

In 2019, JD Sports acquired the British label Pretty Green out of administration. Pretty Green was founded by the Oasis frontman Liam Gallagher 11 years ago and had stood as a symbol of Cool Britannias.