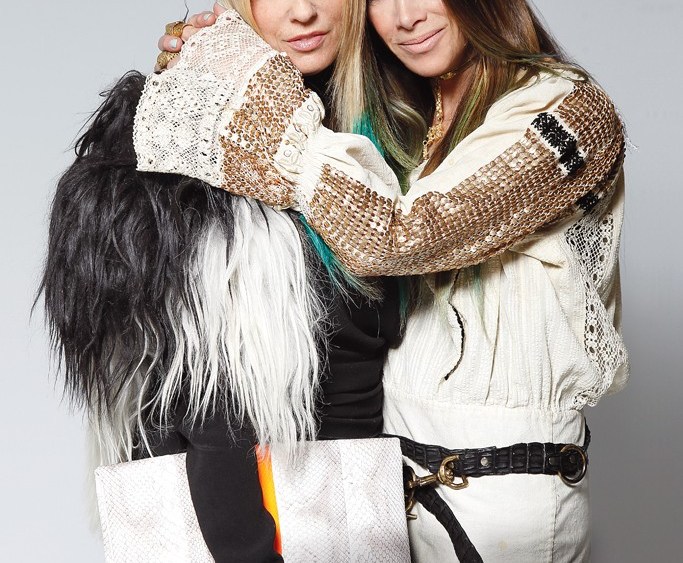 The Juicy Couture gals want their old brand back.

Pamela Skaist-Levy and Gela Nash-Taylor have been reaching out to private equity firms, looking for someone to help them buy back Juicy from Fifth & Pacific Cos., according to financial sources.

So far, Skaist-Levy and Nash-Taylor have yet to find an investor to partner with, sources said. The pair did not respond to requests for comment Thursday.

Fifth & Pacific has been shopping Juicy as well as Lucky Brand in recent months, hoping to raise money for the Kate Spade expansion.

Final bids for Juicy were due earlier this week, sources said. Brand management firm Authentic Brands Group and private equity group IDG Capital Partners are both said to be in the bidding.

It’s unclear whether Skaist-Levy and Nash-Taylor will be able to insert themselves into the process at this point.

But if they did reclaim the brand they built, experts said the pair — known to be “temperamental” — have the creative chops to bring some excitement back to the business.

Observers said Skaist-Levy and Nash-Taylor would need a strong operating partner to make the business run, as their strengths are on the creative side.

“They could probably reenergize [Juicy] and make it important again,” said John Henderson, a fashion veteran and director at Net Worth Solutions. “They were very creative.”

But the business today is very different than the one Skaist-Levy and Nash-Taylor founded. It is far more retail centric, with 75 specialty stores and 53 outlets.

“It would be very difficult to make it a meaningful wholesale brand again,” Henderson said. “Everybody has their matrixes now, [the brand has] been around, a lot of retailers don’t want to compete against lines that are already retail lines.”

While founders often want to return to the brands they built, who’s running the show at Juicy might not be as important as what the product looks like.

“Does it matter to the customer? I’m not quite sure. It’s been a while,” said Corinna Freedman, analyst at Wedbush Securities Inc., who covers Fifth & Pacific. “It tells a great story, it could be a redemption story.”

For the three months ended March 31, the Juicy brand posted net sales of $98.4 million. Adjusted losses before interest, taxes, depreciation and amortization totaled $8.3 million. Last year, the brand had sales of $498.6 million and adjusted EBITDA of $24.5 million. Paul Blum was brought in as chief executive officer last year to lead a turnaround at the brand.

While Freedman said the brand “lost its footing because of pricing and merchandising direction,” she still sees potential in the business.

“I don’t think that the brand is as impaired as some people would like to think,” she said. “There is certainly a market. There’s this anti-Forever 21 mentality going on. The customer is making more of an investment in apparel, versus the fast-fashion commodity, buying the cheapest you can find.”

Mary Epner, who heads up Mary Epner Retail Analysis, said, “Juicy is still a great brand in spite of everything.…It still has a loyal customer base.”

Epner cited the Juicy jewelry business as a category that has been making some headway with the younger, teen consumer.

While the matched terry sweat suit hasn’t really evolved much from the brand’s launch, Epner noted, “If somebody can come in and find the right balance between a new direction coupled with an outlet strategy, that could be a winning combination.”

She also compared Juicy to Lululemon: “Consumers are interested in athletic apparel. What they want is nice-looking, comfortable apparel. They run around all day long in Lululemon. That’s what Juicy used to be. Can someone stay in the same vein and update the look for 2014? That’s the question.”

“If anyone can turn the brand around and give it back its energy, they can,” said Gary Wassner, co-ceo of Hilldun Corp., of Juicy’s founders. “They know who they are designing for. The product never evolved once they left the company.”

Wassner said the two could conceivably work on both Juicy and their new business, Skaist-Taylor.

“Skaist-Taylor is doing nicely,” Wassner noted. “It’s a higher-end collection and much more fashionable in the designer category. The two brands, while they both have a touch of rock ’n’ roll, have different price points. Skaist-Taylor is at Bergdorf and Saks.” Skaist-Taylor is a Hilldun client.

The duo founded the brand in 1997 and had a runaway hit with their signature velour tracksuit. Fifth & Pacific, then known as Liz Claiborne Inc. and headed by Paul Charron, bought the growing brand in 2003 for more than $230 million, including the assumption of debt and earn-out payments over several years, and helped turn it into a broader business.

Skaist-Levy and Nash-Taylor were copresidents of the business and transitioned to creative directors, eventually leaving the firm in January 2010.

While the official word was they wanted to do other things, there were market rumblings that the two were unhappy with the direction the brand was headed and had reportedly had clashes with Fifth & Pacific ceo William L. McComb, who took the reins from Charron in 2006.

Skaist-Levy and Nash-Taylor, who are close friends, went on to found Skaist-Taylor last year.