The contemporary apparel company has a wholesale volume approaching $50 million. 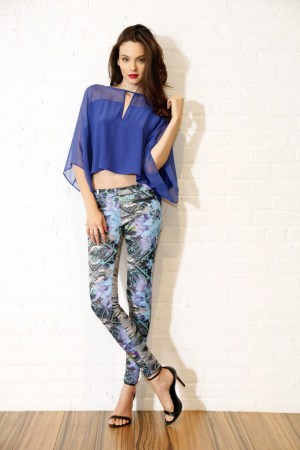 NEW YORK — Kellwood is back in acquisition mode.

This story first appeared in the July 25, 2014 issue of WWD. Subscribe Today.

The six-year-old contemporary brand is headed by Howard Highman, chief executive officer; Laurieanne Gilner, lead designer, and Derek Farrar, production head. Occupying the opening price point in contemporary, Parker is carried at such stores as Bloomingdale’s, Saks Fifth Avenue, Neiman Marcus and Nordstrom, as well as 500 specialty stores both domestically and overseas. The company is based at the Lily Kate multibrand showroom (owned by Highman) at 234 West 39th Street, where it will remain.

“We’ve been looking. We’re at that time where we’ve reached the point where we need to grow, and we need some help growing,” said Highman. He anticipates that Kellwood will help the company, first and foremost, in marketing and public relations, as well as expand its e-commerce capabilities. “We’re looking to take it to the next level,” added Gilner.

Known for its flirty silhouettes and bold and exuberant colors and prints, Parker has quietly built its business. The line is geared to a woman in her late 20s to early 30s. With a sweet spot of $298 retail, the collection focuses on dresses, tops, bottoms, jackets, jumpers and rompers.

“We were drawn to the brand because of its incredible design talent and its brand vision. By leveraging Kellwood’s design expertise, product development, superior sourcing and distribution capabilities, Parker now has the support it needs to become a lifestyle brand,” said Lynn Shanahan, ceo of Kellwood Co. Shanahan said it will help Parker broaden its product categories, expand its distribution internationally and enhance its digital marketing to generate more revenue. Shanahan declined to reveal the purchase price.

Categories for possible expansion would be on the more casual side, such as denim, as well as footwear, swimwear, intimate apparel and handbags. “The Parker name allows you to go into many categories. They can even do home,” said Shanahan. Men’s wear would be another opportunity, she added.

As for how the deal came together, the Parker team said they spoke to a lot of prospects. “We definitely clicked with Lynn when we first met her,” said Farrar. The company employs about 25 people in New York who will be part of the deal. Parker, which ships product 12 months a year, manufactures its collection in China.

Shanahan also sees retail expansion as another opportunity for the Parker brand. Once the company is developed into a lifestyle brand, Shanahan said it would be a natural extension to open its first retail stores.

According to Janki Lalani Gandhi, managing director at The Sage Group, the investment banker for Parker, the company is one of the few good opportunities available in the market right now in the contemporary space. “The company was founded by three industry veterans who are really focused on design and product excellence.…The brand has very strong revenue growth, high brand appeal and healthy margins. They have very strong sell-throughs at retail. Key customers are high-end department stores such as Nordstrom, Saks and Bloomingdale’s; specialty stores such as Intermix, Barneys New York and Harvey Nichols, and online retail sites such as Shopbop, Piperlime and Revolve,” the banker said.

While there was interest among several private equity firms and a few strategics, Gandhi said what interested Kellwood was the opportunity to open freestanding stores. She said that Parker received interest from multiple firms because of the brand’s growth potential. “The brand to date focused primarily on two core categories, tops and dresses. They have a small amount of bottoms, but no accessories,” the banker said.

“At the end of the day, the Parker team chose Kellwood due to chemistry with their management team and the valuable resources that they bring to the table, such as experience and strength in building brands, as proven by Vince, and extensive infrastructure. This will allow the cofounders to fulfill the potential of the Parker brand at an accelerated rate,” she said.

Kellwood spun off its contemporary brand, Vince, in an initial public offering in November.

Parker will be run separately from Kellwood’s other brands. Kellwood’s brands include Rebecca Taylor; XOXO; Sam Edelman, a young contemporary line that launches at retail in August, and Mason & Belle, a new country-inspired e-commerce brand for juniors.

Over the past few years, Kellwood has divested itself of such brands as Adam, BLK DNM, Zobha, Lamb & Flag and Baby Phat. Shanahan said the company was open once again to acquisitions for companies in the $30 million to $50 million range that were profitable, had an accretive earnings before interest, taxes, depreciation and amortization, and which Kellwood could help grow. “Parker fit perfectly. We don’t want to be Parker, we want to help Parker grow with our capabilities.”