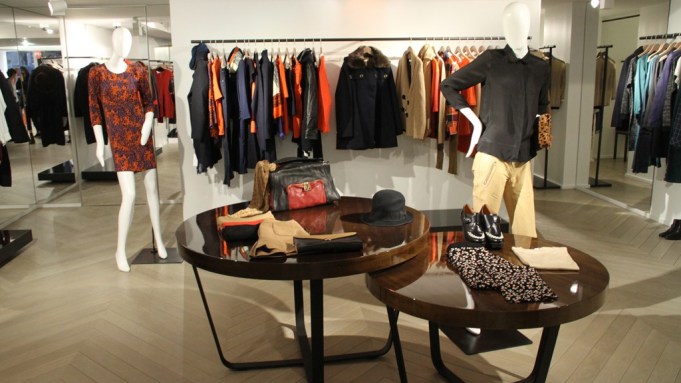 PARIS — Kohlberg Kravis Roberts & Co., the new majority owner of the Sandro, Maje and Claudie Pierlot fashion chains, plans to accelerate their international expansion, particularly in the U.S. and Asia.

Financial terms were not disclosed. Market sources pegged the deal’s value at about 650 million euros, or $853.4 million at current exchange.

Evelyne Chétrite and her sister Judith Milgrom, along with Elie Kouby and Frédéric Biousse, will retain about 35 percent of the company.

“KKR is one of the best private equity funds worldwide. I met with Henry Kravis in New York, and I have been impressed. We felt we would move to the next level with KKR,” Frédéric Biousse, chief executive officer of SMCP Group, told WWD. The three other contenders were private equity firms The Carlyle Group, Eurazeo and an Asian candidate.

Evelyne and Didier Chétrite and Judith Milgrom and Alain Moyal founded Sandro and Maje in the late Eighties and early Nineties. Claudie Pierlot was acquired in 2009, and SMCP Group was established in 2010 in tandem with the L Capital and Florac investments.

“To find such a combination of high-potential brands is very rare,” said Nicolas Gheysens, Paris-based director for KKR. Gheysens cited the great interest from buyers and consumers in French contemporary brands and the recognition of French know-how abroad.

Brian Duffy, a former president and chief operating officer for Polo Ralph Lauren Europe, has been acting as a consultant for KKR during the acquisition process. “He will probably continue to be involved with us in this investment. But there won’t be changes at the companies’ operational level,” said Gheysens. “This may, for example, involve his joining the supervisory board, although nothing has been formally defined yet.”

Plans include opening flagships. “We want to upscale our brands, not in terms of prices but products and shopping experience,” Biousse explained. “We will have bigger stores, measuring on average 100 to 150 square meters [or from 1,080 to 1,600 square feet] from 80 square meters currently [860 square feet]. We will close our smaller boutiques to open larger locations.” He said they also intend to widen the brands’ accessories offer.

SMCP operates some 570 points of sale. Last year it generated revenues of 350 million euros, or $450 million at average exchange.

About 150 store openings are planned for 2013. In Asia, three stores are in the pipeline in Hong Kong and four stores in Shanghai are set to open by September.

About 40 stores will open this year in North America. The group currently counts 69 doors in North America, with all having opened in the last 18 months. “We will have 100 doors in a few months and 200 in the next two years,” Biousse said.

Upcoming openings include the first Claudie Pierlot door Stateside in May in Bloomingdale’s in New York, as well as a Sandro store on Fremont Street in San Francisco and a store in Caesar’s Palace in Las Vegas.

Maje has an aggressive North American retail strategy in play. The label plans to open its fourth New York store at 1070 Madison Ave. on Monday, with locations to follow in Greenwich, Conn., in May, and a fifth New York store on Columbus Avenue on the Upper West Side in June. By the end of the year, additional stores are planned for Bal Harbour, Fla., Los Angeles, Las Vegas, San Francisco and Houston. Its wholesale distribution began with Bloomingdale’s and Net-a-porter and expanded to include The Room at Hudson’s Bay in Canada in March and Nordstrom, with which Maje went live on nordstrom.com last week and will be in four locations later this month.

Patrick Valeo, president and chief operating officer of SCMP USA and Canada, who arrived at the company from Dolce & Gabbana a little more than a year ago, said Maje is also in talks with Saks Fifth Avenue and Neiman Marcus about possible distribution. All of its department store spaces are run on a concession basis. “[A year ago] we had about five different Maje points of distribution in the U.S. and if you look at today, we’re at 26,” said Valeo. “At the end of the year we will be at over 40 locations in the U.S.”

Sales per square foot average about $2,000, said Valeo. He noted that Maje has ramped up its U.S. staff, hiring a marketing team in the last six months, adding a director of stores and a dedicated buying team.

Another part of the strategy for the group is to possibly make more acquisitions. “[Brands that we would buy] would be different from Sandro, Maje and Claudie Pierlot but also geared towards apparel and affordable luxury, whether there are fashion brands, denim, accessories, shoes, home, candles.”