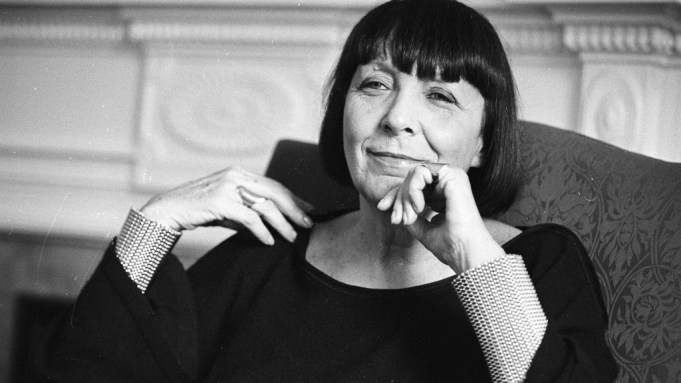 MILAN — Krizia, one of Italy’s first ready-to-wear brands that helped build the country’s global fashion identity, is changing hands. And founder Mariuccia Mandelli is passing the baton after six decades in business.

Leading Chinese fashion retailer Shenzhen Marisfrolg Fashion Co. Ltd., has taken control of Krizia SpA, WWD has learned. Financial details of the transaction, which is expected to be finalized and operative in late spring, were not disclosed.

Shenzhen Marisfrolg Fashion is owned by entrepreneur Zhu Chongyun, who will become chairman and creative director of Krizia. Her first collection for the label will make its debut in February 2015 in Milan. Marisfrolg is based in Shenzhen but Krizia will continue to be based in Milan.

At its peak in the Nineties, Mandelli and her husband, company chairman Aldo Pinto, had developed Krizia into a $500 million business, leveraging a string of licenses and a global network of stores.

The one-time power couple, both in their 80s, have been battling health issues for years. Without a second generation to helm the brand, Krizia’s volume is now believed to be miniscule and its assets include the Milan store and the brand’s stately palazzo where the shows are held.

Zhu is expected to revamp the brand and, over the next five years, to open Krizia flagships in Beijing, Shanghai, Guangzhou, Shenzhen and Chengdu, and gradually reopen units in the most important cities in Europe, Japan and the U.S.

Krizia entered China in 1994. In 2003, Japan was the company’s largest market, with 30 brand stores and 400 multibrand clients. In the Eighties and Nineties, boutiques stood in top shopping streets in New York, Paris, Venice, London and Hong Kong, mainly designed by architect Piero Pinto, Aldo Pinto’s brother. Aldo Pinto’s sons Silvio and Andrea, a former Nina Ricci president who worked on and off for Krizia as a general manager over the years, have ventured into their own consultancy businesses.

Mandelli said she was “delighted” to have “found a successor” who has “strength and talent and is willing to lead Krizia’s international growth. This is good for everyone.” A fixture of Milan Fashion Week and the city’s life along with her husband, the strong-willed Mandelli has of late rarely been seen in public. She did not take a bow at the end of her fall show on Thursday.

A longtime admirer of Mandelli’s “pioneering work,” Zhu said her “mission was the preservation of Krizia’s idea of fashion, made of visionary research and immense creativity.” The entrepreneur and designer said she was “proud to take on the baton and help drive the Krizia myth — and business — to new heights.”

Founded in 1993, Marisfrolg Fashion last year reported sales of 2.56 billion yuan, or $418 million. The group controls more than 400 directly operated stores that carry the high-end, contemporary Marisfrolg brand in top-end shopping malls and department stores in China, South Korea, Singapore and Macau. The Krizia line will not be distributed in those stores.

A market source defined Zhu as “a woman with a strong vision and an incredible capacity of understanding where fashion is going. Her style is feminine and flattering. She is the perfect one to give Krizia an international and modern flavor.”

Mandelli, who hailed from Bergamo, was instrumental in launching Italian rtw globally. After first opening a small fashion factory with a friend, in 1954, the designer launched the Krizia brand, named after a Plato dialogue on feminine vanity. The story of how she packed her first tank dresses and skirts in a suitcase, hopped into her Fiat 500 and scooted around Italy, knocking on the doors of the finest boutiques to sell them became a favorite fashion tale. She showed the brand for the first time at Palazzo Pitti in Florence in 1964. This all-black-and-white collection brought her the Critica della Moda award, previously won only by fashion designer Emilio Pucci.

Pleating, sweaters spiked with leopard and tiger motifs, sculpted shoulders and cocoon shapes became some of Krizia’s hallmarks, and the designer was also known for her experiments with materials such as eel skin, cork and gum. In 1971, Krizia was awarded the Tiberio d’Oro prize in Capri for her short shorts, later renamed HotPants by WWD, at a time when midi and maxi lengths were prevalent. In recent collections, Mandelli has found far-reaching inspiration ranging from the Far East, the Sahara and Zen New-Age to the Space Age, while continuing to target women with a bold attitude.

While Krizia’s business has slowed considerably in recent years, Armando Mammina, Milan-based marketing and strategic consultant, said the label has “more contemporary stylistic totems, such as the animal knitwear,” compared with other brands that have been recently relaunched, such as Vionnet or Schiaparelli, that he contended no longer have “aesthetic historical references in the consumer’s imagination.” These are strengths that can be leveraged for a faster relaunch and repositioning of Krizia. Mammina envisioned the new course of Krizia could “already be winning in the medium period —five years.”

He also noted that, given the brand’s strong performance with several licenses, “picking them up again and creating new ones can bolster Krizia’s identity and be a business developer.” Conversely, in the case of Vionnet and Schiaparelli, “to create an aspirational strength of the brand and then extend the label is more complex” and will take longer. Also, the relaunch of historic brands, such as Pucci, does “not always allow a development beyond its core business. The risk is a dilution of the brand.”

Aldo Pinto, a textile businessman, and Mandelli married in 1968 in Jamaica. With Pinto’s help, the designer developed Krizia into a global business that included licenses for products spanning from fragrances and accessories to eyewear, ties, costume jewelry and even wines and Champagne.

Krizia was a pioneer in the Eighties and Nineties in spinning the signature brand into a plethora of more affordable, younger collections including Krizia Maglia, Krizia Top, Krizia Poi, Poi by Krizia, Krizia Jeans, Per Te by Krizia and men’s, innerwear and sportswear lines.

Over the years, Mandelli tapped designers to work on the brand including Giambattista Valli — from 1995 to 1997 — and, in 2000, Alber Elbaz, who stayed on for only one collection before heading to Lanvin. Elbaz was followed by Belgian designer Jean-Paul Knott and then English designer Hamish Morrow.

In 1999, to mark the brand’s 45th anniversary, a retrospective exhibit of 100 outfits was held at the Grey Art Gallery in New York with a set designed by the husband-and-wife team of Dante Ferretti and Francesca Lo Schiavo, while costume designer Gabriella Pescucci, who won an Oscar for Martin Scorsese’s “Age of Innocence” in 1994, helped Mandelli pull the 100 outfits from more than four decades worth of collections.

After its New York run, the exhibit traveled to Canada, England and Japan.

Mandelli was a forerunner in two areas that later became of interest to her fashion competitors. Always fascinated with the arts, in 1985 Mandelli opened Spazio Krizia at the company’s headquarters in Milan. The space, a large multifunctional, multimedia area capable of containing 700 people, was planned and designed with the help of her brother-in-law, Piero Pinto.

Also, in 1989, Mandelli inaugurated the K Club in Bermuda, an exclusive resort that she designed and which was popular with celebrities such as Princess Diana and Michael Douglas.