The board of the luxury giant met in Paris specifically to discuss the proposed deal amid a deteriorating situation in the U.S. market.

By Miles Socha
with contributions from Evan Clark
on June 2, 2020

According to sources, members of the board of LVMH Moët Hennessy Louis Vuitton called a meeting in Paris Tuesday night specifically to discuss the matter amid a deteriorating situation in the U.S. market, Tiffany’s largest.

It is understood board members of the luxury giant are concerned about the impact of not only the coronavirus pandemic, which has claimed more than 100,000 lives in America and wreaked widespread economic damage, but also the growing social unrest over the death of George Floyd at the hands of Minneapolis police.

The outpouring of anger over racial injustice in America has prompted widespread demonstrations and also looting and property destruction in many cities, scuttling attempts to get the economy moving again.

In addition, these sources said, LVMH board members voiced concerns about Tiffany’s ability to cover all its debt covenants at the end of the transaction, which was expected to be concluded mid-year.

While no firm decision was made at Tuesday’s meeting, attendees sent a clear message that the acquisition should be reconsidered.

Tiffany & Co. has been mum on the LVMH takeover – and market conditions in the U.S.

At its annual shareholder meeting Monday, held virtually, the luxury jeweler didn’t mention any specific challenges surrounding the coronavirus, the deal to become part of LVMH, or the peaceful protests and clashes filling the streets of America.

Shares of Tiffany, which closed up 0.2 percent to $128.36 each on Monday, are up more than 42 percent year-over-year, held aloft partly by the prospect of the takeover by LVMH, the largest player in the luxury sector with a proven track record of building brands and business over time with properties such as Dior, Bulgari, Fendi and Louis Vuitton.

LVMH has also said little about the deal, squelching reports in March that it was buying shares on the open market to take advantage of a drop in Tiffany’s share price as the health crisis spooked investors and sent stock markets reeling.

While discussing first-quarter results with analysts and journalists in April, LVMH chief financial officer Jean-Jacques Guiony said only that the deal was still on track. “We will stick to the contract, full stop,” Guiony said at the time.

Last November, LVMH agreed to acquire Tiffany for $135 a share.

“Our goal is to provide Tiffany with the ideal environment to further invest and grow,” LVMH chairman and chief executive officer Bernard Arnault told WWD when the deal was unveiled, noting the delisting would lift the pressure on short-term profitability that comes with being listed in the U.S.

See Also: The Dealmaking That Brought Tiffany to LVMH

Tiffany shareholders approved the deal in February, with investors holding about 72 percent of the American firm’s shares represented at the meeting. At that time, the deal was still subject to routine regulatory approvals and the details of the merger were described as not fully worked out.

The Tiffany deal, secured before the world was upended by COVID-19, was seen as giving LVMH a tighter grip on the lucrative high-end jewelry segment.

Combining the financial firepower of the world’s largest luxury group with the iconic American house — known globally for its robin’s egg-colored packaging and classic engagement ring settings — was seen as creating a more robust competitor to the leading jewelry label Cartier, which belongs to Compagnie Financière Richemont.

Tiffany’s last indication of its financial performance was for its fourth quarter ended Jan. 31. 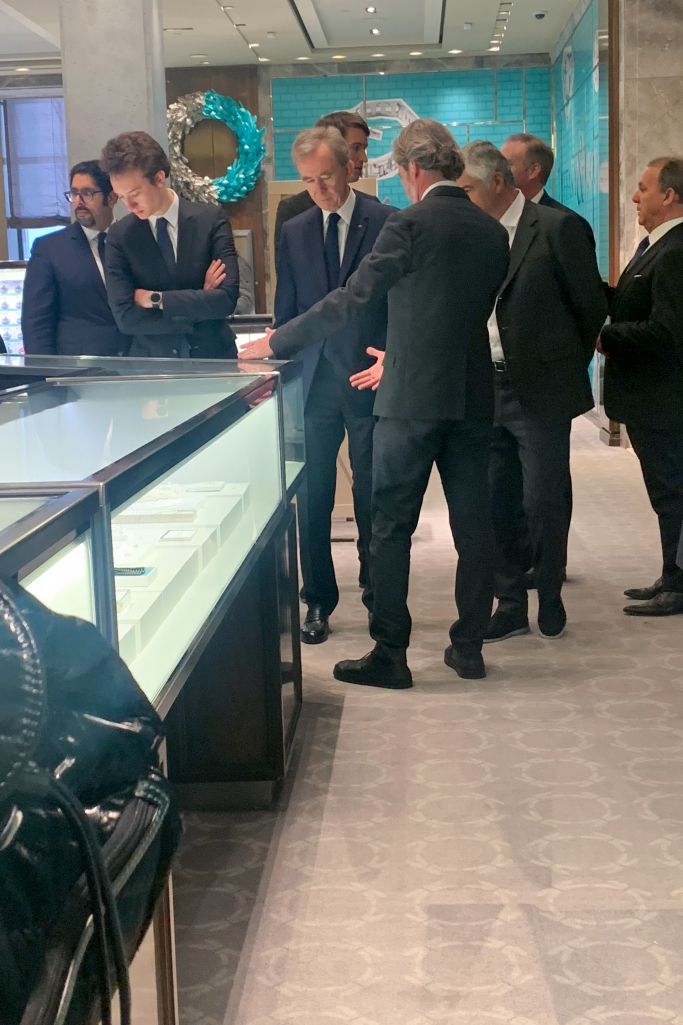 The Americas region — which includes the U.S., Canada, Mexico, Brazil and Chile — accounted for 43 percent of Tiffany’s net sales in fiscal 2019, according to the company’s web site. Its next-largest region, Asia-Pacific region, represented 28 percent of revenues last year.

The deal was heralded as something of master stroke by Arnault, who could use the might of LVMH to both seal the deal and supercharge the jeweler’s business, but to also gain a much larger U.S. presence.

But given how much the world has changed since the deal was reached in the fall, it’s little surprise that even the cash-rich Arnault is thinking hard about the acquisition. Other big-time buyers have also gotten cold feet given the state of the economy, including Sycamore Partners, which was on track to buy control of Victoria’s Secret, but then sued to get out of the deal. L Brands, parent to the intimates brand, decided to drop the deal and move forward on its own.

If the LVMH-Tiffany agreement does indeed fall apart, it will mark the unraveling of months of dealmaking.

The negotiations began over a lunch in October, when Antonio Belloni, group managing director of LVMH, broached the idea of a $14.5 billion offer to Tiffany ceo Alessandro Bogliolo.

Tiffany’s chairman Roger Farah picked it up from there and after a long string of meetings with advisers, bankers — a leak to the press — and many long nights and weekend, LVMH was persuaded to raise its price.

Since the deal was signed, Tiffany’s stock has been supported by that $135 a share offer from Arnault. While in normal times the deal would have been seen as nothing less than a sure thing, these are not normal times. And if Tiffany does end up remaining an independent company, it will have to reevaluate — and investors will do the same.

Shares of Tiffany’s stock dropped sharply after WWD reported online Tuesday that the deal was on shaky ground and ended the day down 8.9 percent to $117.03, a discount of 13.3 percent to the deal price.

WATCH: How Fashion Is Fighting the Coronavirus