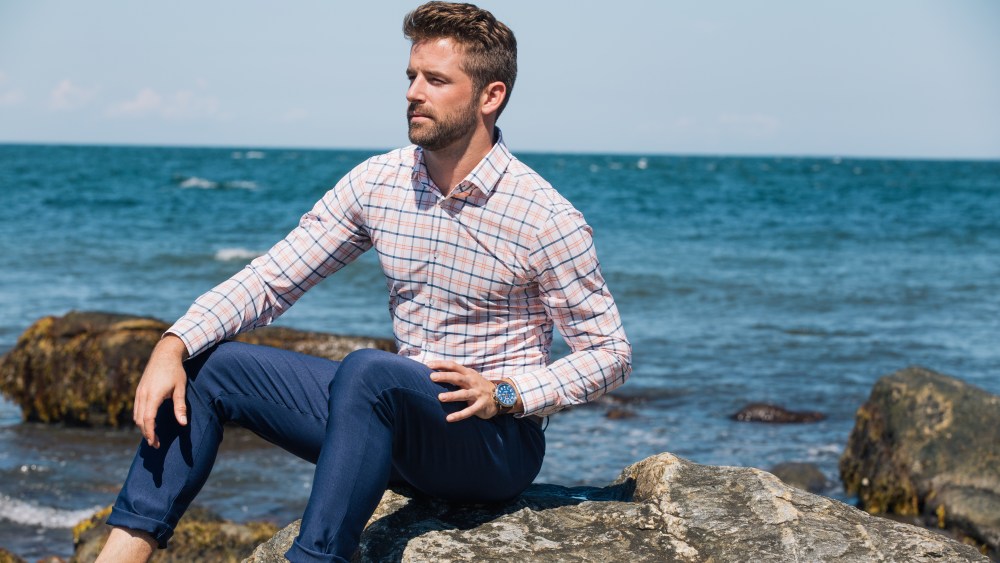 Men’s wear brand Mizzen + Main has a new investor in the form of L Catterton, the largest consumer-focused private equity firm in the world.

L Catterton has provided a “significant growth investment” in the brand, although Mizzen + Main and L Catterton have declined to provide any specifics regarding terms of the investment. Two things that are known include L Catterton as the sole investor for the latest fund-raising round, and it will take a board seat at Mizzen + Main.

Kevin Lavelle, founder and chief executive officer, said, “We still control and run the company.” He said the funds raised would be used for the company’s growth and expansion plans, such as supporting retail growth and the opening of more pop-up stores.

At the end of 2014, the company was in 35 retail doors. At the end of last year, it was in nearly 300 doors, including a number of high-profile professional golf shops. It’s also in two Saks Fifth Avenue doors. Beginning in February, the company did a two-door test at Nordstrom, which last month was expanded to 11 Nordstrom doors.

The latest round is effectively a Series C. Mizzen + Main was founded in 2012. The company began with a seed round of $250,000. A $1.25 million Series A round was completed in September 2014, followed by a $3 million Series B round in April 2016. The first two rounds were composed primarily of friends and family, as well as a few angel investors. According to Lavelle, the Series C is its first with an institutional investor.

The brand began as a shirtmaker featuring performance fabrics that offer moisture-wicking and wrinkle-free dress shirts. According to Lavelle, the product line has been expanded to include Henleys and polos, and more recently the company added chinos, pullover sweaters and a sweater Henley — which Lavelle touted as a company creation. The company last year introduced shorts and short-sleeved dress shirts to its offerings. The company also makes a T-shirt that says United States of America, with the Navy Seal trident logo on it. Proceeds from sales of the T-shirt are given to the Navy Seal Foundation, Lavelle said. Later this year, the brand plans to introduce revamped pullovers and sweaters, both with new fabrication and improved wash-and-wear quality.

L Catterton is known for category investing, focusing on brands in the consumer space that benefit from strong behavioral and lifestyle trends that are likely to grow for the foreseeable future. Industry sources said as more and more Millennial and Gen X men gravitate toward apparel shopping online, men’s fashion has become one of the fastest-growing e-commerce categories.

Jon Owsley, co-managing partner of L Catterton Growth Fund, said, “Digitally native men’s apparel businesses have been growing, quickly driven in large part by strong Millennial engagement. From a category perspective, it is an interesting space. When we look at the different [men’s] brands, Mizzen + Main plays to a lot of key trends and is offering a new kind of product, with unique fabrics and a modern fit for the active and forward-thinking Millennial and Gen X consumer.”

Owsley added that the firm saw an opportunity to grow the fashion brand’s “online sales, expand its retail presence, and increase awareness of the brand’s unique value proposition.”

The private equity firm has experience investing in premium apparel and lifestyle brands. Current and past investments include Sweaty Betty, Hanna Anderson, Sandro and Maje, Pepe Jeans, CorePower Yoga and 2XU. Last month it took an investment stake in men’s activewear brand Rhone. And just this week, L Catterton Asia paid $38 million to acquire Columbia’s Maaji Swimwear to create a merger with Australia’s Seafolly. The plan is to build a global beach lifestyle retail platform generating $500 million in sales within the next five years. L Catterton was formed in 2016 as a partnership between Catterton, LVMH Moët Hennessy Louis Vuitton and Groupe Arnault.

Lavelle said, “Our top 130 customers have spent more than half-a-million with us. Over the past five years, they’ve replaced everything in their closet with Mizzen + Main.” As for that top shopper profile, the ceo said buyers range from entrepreneurs to techies, creative types, professional athletes and Wall Street financiers.

The brand is known for its American-made product, and does not discount, but special pricing is available for certain items, such as dress shirts at a better price when one buys three or more.