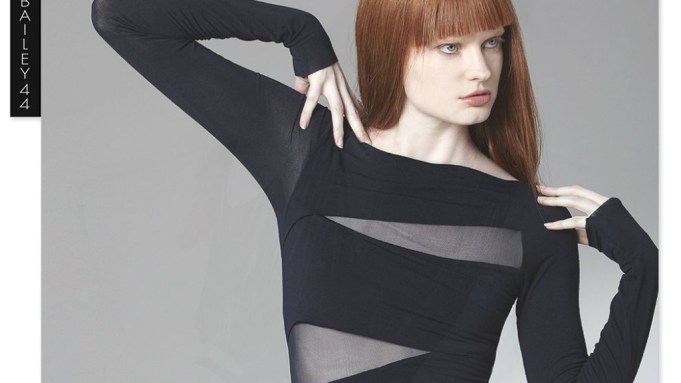 Norwest Venture Partners took a roughly 50 percent stake in the business and is a minority owner.

Ruthy Grode, cofounder and chief executive officer of the brand, said Bailey44 was using the new funds to build an e-commerce site, work on international expansion and expand its brand awareness.

Bailey44 is carried at Nordstrom, Saks Fifth Avenue, Neiman Marcus and Bloomingdale’s and has several hundred active wholesale customers throughout North America, Europe and Asia. The brand’s styles, which include lots of form-fitting dresses and tops with stripes, are all made in the U.S. of European-sourced knits.

“Our company has been profitable since its inception in 2006, and we’ve been fortunate enough to achieve substantial growth of at least 20 percent year after year,” Grode said.

The brand makes 12 lines a year and is always pushing to update its looks.

“We try to take it to the next level, we don’t do the same old fabrications,” Grode said. “We have a real sense of urgency.”

The e-commerce site, once it’s up and running, will give the brand a new and real-time view on what shoppers want.

And Bailey44 will be getting input from its new partners at Norwest.

“Not only will their capital be an asset to expedite [Bailey44’s] growth, but they have a lot of experience in the consumer brand sector that will help us,” Grode said.

Brown said Bailey44 is “well positioned for continued growth” and that the investor would be “working closely with the team to continue building a major force in the women’s contemporary apparel category.”

Norwest has funded more than 500 companies across numerous sectors since 1961.

Vernon Company advised Norwest on the transaction and has been working with Bailey44 on its growth and branding initiatives.