Although deal values across industries are down from last year, an analysis of first-quarter transactions by PwC found that M&A activity is vibrant as companies look to pare down their portfolios and make acquisitions that will help garner greater market share.

And in the consumer markets segment, which includes hospitality, food and beverage, apparel/accessories and footwear as well as retail, there are “positive trends that inspire optimism for activity in the coming quarters,” PwC analysts said in their report.

Overall, it remains a seller’s market, and has been one for the past 10, noted John Potter, U.S. deals sector leader at PwC. Potter told WWD that trends fueling deals include companies looking to “buy assets to increase their capabilities, and/or bringing into the portfolio brands that consumers want as well as [adding assets] to build scale.”

Potter said in the consumer markets segment, change is inevitable, and ongoing disruption is driving companies to focus on innovation. He noted that most of the deals are smaller in size, and the focus is on increasing capabilities that will help sharpen a brand’s competitive edge.

Researchers at PwC who focus on consumer markets said in their report that among the first-quarter deals analyzed, high valuations “indicate a willingness to pay top dollar for worthy assets, while higher concentrations of cross-border deal value and smaller transactions have focused activity in high growth areas.” 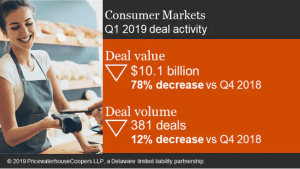 “The food and beverage sector remains hot with three of the largest deals this quarter,” they said in their report. “Consumer markets is also part of the swath of recent IPOs this year with Levi Strauss & Co., which had such high returns that it represented the strongest quarter of [consumer markets] IPO performance since 2015.”

PwC analysts said despite a decline in the number of “deals announced over the past two years, M&A activity remains positive. There were 381 deals [in the consumer markets sector] announced in [the first quarter], of which 71 transactions had a disclosed value totaling $10.1 billion.” The analysts said average deal size was about $142 million, which represents a 63 percent decline from “the two-year average, as companies target smaller deals to mitigate risks from unsettled trade and regulatory policy.”

While there were no “megadeals” in the consumer markets sector, PwC said JAB Holding Co.’s pending acquisition “of an additional 20 percent stake in Coty Inc.…for $1.7 billion was the largest deal announced in Q1 2019.”

In the retail segment, dealmaking has significantly cooled. PwC said M&A values in the segment “has significantly declined since the $85.6 billion peak reached at the end of 2017, with Q1 2018 and Q1 2019 becoming the quarters with the lowest deal value recorded over the past two years.”

“Deals activity in 2019 is being defined by companies in a range of industries making big moves to capture market share,” Potter said in the report. “Although total U.S. deal value is down from a year ago, the amount of M&A investment in the first quarter jumped 35 percent from the end of 2018, with more than $509 billion in announced transactions. That includes more megadeals — transactions of at least $5 billion in value — than in each of the last two quarters, led by deals in pharmaceuticals and life sciences, media and telecommunications, and technology.”

PwC analysts said amid deals to boost scale, “cross-sector deals are holding their appeal, accounting for almost half of Q1 deal volume. Technology, consumer markets, and media and telecom have been the most active, with companies in those industries both pursuing investments in other sectors and drawing the most interest from other sectors.”

Potter said in the report that the more “significant investments” are occurring within specific industries. PwC said the first-quarter deal value included in transactions by companies in the same sector “was up significantly from 2018.” Potter said the “wave of pharma megadeals meant most of that industry’s total deal value was captured in major scale plays. Other industries that posted substantial deal values, such as banking, also saw that investment stay within their sectors. Outliers — where a majority of deal value was in cross-sector deals — included manufacturing and media and telecom.”

Across industries during the quarter, Potter said 25 percent of corporate M&A transactions “involved divestitures, as companies continue to reevaluate how operations and capabilities fit with their investment strategies.”

“Some sellers are adjusting to win regulatory approval or responding to shareholder activism around profitability and growth potential,” PwC stated in the report. “Such moves put assets into the market that appeal not only to competitors but also private equity firms that continue to attract high levels of capital ready for deployment.” Potter noted that the largest volume of divestitures is in the real estate, technology, consumer markets and media/telecom sectors.

From here, Potter expects M&A activity to continue. Companies have a lot of cash on their balance sheets and there’s also plenty of capital available to finance a deal.