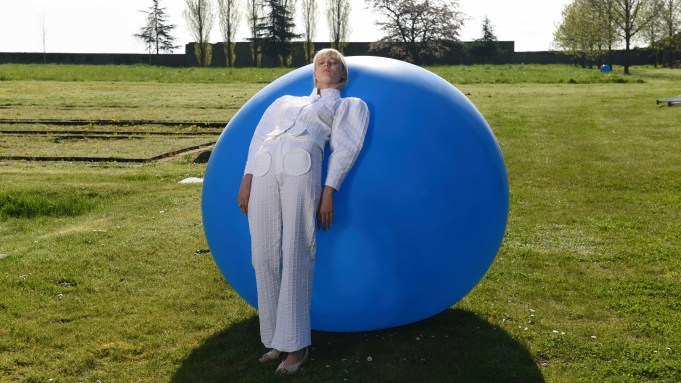 As a fundraising round, it’s a major and unprecedented statement about female power, influence and business know-how.

Géraldine Guyot, cofounder of the Paris-based accessories firm Destree, has revealed that investors in the fast-growing company range from venture capital firm Sequoia Capital China, at the behest of Angelica Cheung, to such bold-faced names as Beyoncé, Rihanna, Reese Witherspoon, Gisele Bündchen and Gabriela Hearst.

The French entrepreneur, who has parlayed her passion for modern and contemporary art into unique hats, handbags, jewelry and now apparel, said she and cofounder Laetitia Lumbroso plans to use the series A funding to almost double the size of their small team; open Destree’s first freestanding stores; expand into new or underdeveloped markets like the Middle East, China, Japan and the U.S., and supercharge e-commerce operations and digital-native marketing.

Financial terms were not disclosed, but it is understood Guyot and Lumbroso retain majority control of the business, founded in 2016.

What’s clear is that Guyot’s idea of having only women around the table at Destree solidified interest in every potential investor she approached, and allowed her to assemble a diverse group with knowledge and experience across sustainability, fashion-tech, entrepreneurship, communications, beauty and entertainment.

“We noticed Destree because of their distinctive collections, with designs that are artistic and recognizable,” said Cheung, venture partner at Sequoia Capital China, which spurred the series A and led the funding round. “In this crowded and competitive space, Destree has had a very promising start by already establishing a strong DNA, which often determines future growth. We’re excited to be part of their journey while leveraging our global and local resources to help them realize their ambitions.”

Cheung is the former editor in chief of Vogue China. Since she arrived at Sequoia, the firm has taken stakes in luxury retailer Ssense and fashion brands including Ami Paris and Seoul-based We11done.

Busquets, who has invested in such companies as Farfetch, Moda Operandi and Lyst, touted Destree’s French savoir faire and its business model, with 60 percent of revenues already coming from direct-to-consumer sales.

“They also propose handpicked edits to the most exclusive multibrand stores internationally,” Busquets said. “This strategy works very well as an impressive road map to scale the business in an effective and sustainable way.”

According to Guyot, it was the perfect time to raise capital and further develop the business, as luxury fashion rebounds and the pandemic ebbs.

“So far we’ve grown organically, reinvesting our own profits since Day One,” she said in an interview. “Our main growth avenue is market share gain, which will come by increasing our physical and digital presence.

“This fund-raise will allow us to gain control of our distribution and control our clientele much more. We are targeting over 80 percent of directly controlled sales,” she added. “We are thankful for and honored by our female-only funding round. So many of our role models are participating.”

Asked how she will cope with the pressure of delivering value to such a powerful clutch of shareholders, Guyot characterized it as an energizer.

“The good thing is I tend to work well under pressure, better than under no pressure,” she said over tea at the Hôtel Plaza Athénée in Paris, her pitch-black dog Lemon resting quietly at her feet. “When you have investors, you have to be accountable.…It’s good pressure. It should nourish me.

“We look forward to the moments in which we may draw inspiration from this unique pool of investors. It is definitely not a coincidence: We were oversubscribed and had to turn down many reputable male investors in order to fulfill this vision,” she added.

By all accounts, Guyot seemed destined for a career in the art world, not fashion. Her mother is on the board of the Pompidou Museum and has been collecting mainly German and American art from the second half of the 20th century.

“I was raised in a family of art lovers. Since my early childhood, I had the privilege of being surrounded by art and I quickly developed a strong passion for it,” she said.

She recalled how her parents collected postcards of artworks from museums around the world and used them as flash cards to teach their daughter about contemporary works and artists.

“I grew up going to museums. My whole childhood was about going to museums and galleries, meeting artists,” she said. “It is an essential part of my life and of Destree’s DNA, which I think gives it an unconventional signature and approach to fashion.”

“I like art that disturbs the eye visually,” she explained. “I am more focused on the art of our time, and collecting works I can relate to, as well as works from artists I am able to build deep relationships with.”

In parallel, she nurtured a fascination with fashion and began amassing vintage pieces from the 1960s and 1970s from the likes of Yves Saint Laurent and Celine. Her collection also includes lesser-known talents like Franck Sorbier, and she flicked through her camera roll to show off some of his arty jackets.

After graduating from Central Saint Martins in London, where she studied art and received a BA in culture, criticism and curation, Guyot decided she would launch an accessories brand.

She seized on the word D’Estree, plucked from a familiar street in Paris and sounding very French, and decided she would start with hats, sensing the marketplace was too crowded with leather goods and jewelry.

Applying her eye for bold color and graphic shapes to the category, Guyot succeeded in winning attention for the category before eventually expanding with jewelry and handbags.

In November, she threw up a test balloon with ready-to-wear via a pop-up shop at Le Bon Marché in Paris, and it did gangbusters. Women responded to her feminine, vaguely historical silhouettes and styles named after artists.

Handbags — including hero styles like the Albert — rank as Destree’s biggest product category, with jewelry and rtw now vying for second place, and hats the smallest. In rtw, her hero product is the puff-sleeved Yoshitomo/Amoako suit, and the plan is to flesh out the apparel category.

The entire product range will be showcased in Destree’s first freestanding boutique, slated to open in June at Rue du 29 Juillet in Paris, across the street from the Saint Laurent Rive Droite flagship on Rue Saint Honoré that used to be Colette, and among a clutch of trendy stores that will soon include Danish brand Ganni.

Guyot is plotting a New York City boutique for a fall opening, plus her first outpost in China in 2023, with strategic advice from Sequoia’s Cheung, who is based in Beijing. Eventually, select cities in Japan may also get Destree stores.

Her near-term goal is to have the three or four physical stores running successfully alongside Destree’s e-store and a wholesale network numbering about 80 stores. Marquee wholesale accounts include Selfridges, The Webster, Isetan and Le Bon Marché, where a permanent shop-in-shop is slated to open in June.

Guyot described a more selective exposure for the rtw category. Destree is already carried by stores in Europe, the U.S., Japan and Korea. The Middle East and China represent key geographies for expansion.

Beyoncé was among the first big celebrities to carry a Destree bag. Guyot had sent a few on a lark through the music star’s stylist Zerina Akers, and roughly a year later the singer was pictured during New York Fashion Week toting her Alvar style on one shoulder. “We were so excited!” she recalled.

Her hunch was right that accessories could be a fast-track to breaking through the clutter of a crowded fashion market.

“I’ve always been fascinated by the relentless efficiency of accessories,” she said. “Your outfit can be very simple, but accessories always give it character.”

She explained that her approach to accessories, “graphic and structured,” is uncommon.

Guyot explored a funding round in late 2019, but abandoned the project when the coronavirus pandemic hit. She and Lumbroso pivoted successfully to e-commerce, making 2021 the “best year so far” for the young company.

Lumbroso went to business school and had 10 years of experience in the luxury sector before hooking up with Guyot. “We are very complimentary and work hand-in-hand,” she said. “As a start-up, we need to multitask all the time, roll up our sleeves and be very street smart when it comes to working on any aspect of the business.”

Guyot restarted the funding process last year after she moved to New York, having followed her new husband Alexandre Arnault Stateside when he accepted a job as executive vice president, product and communications, at Tiffany & Co. following its acquisition by the family group LVMH Moët Hennessy Louis Vuitton.

“We are still headquartered in Paris,” she noted. “I go back and forth as much as I can and am acting as head of the U.S. market.”

She stressed Destree’s Parisian essence, with each step of the creative process occurring in the French capital, “from conceptualization to design and responsible craftsmanship.”

“We have been working with the same artisans since the beginning and we are very proud of these partnerships we have built over the years.”

Hearst was among the first women Guyot approached for the funding round, having ghost-designed some of the accessories for Hearst’s signature brand for spring 2021.

“We were not only looking for money, because money is easy to find. What’s hard to find is people with different expertise,” Guyot said, explaining that the investors she assembled will “help us open doors in different parts of the world.”

Destree boasts 60,500 followers on its Instagram account, and the brand has relied on word-of-mouth and press mentions so far. “We plan on organizing trunk shows across the U.S. since I live there now, to localize discovery of the brand,” Guyot said.

She noted Destree also plans to shoot campaigns monthly in tandem with its rtw drops. WWD was present at the shoot for its summer 2022 delivery, which includes 10 color versions of the asymmetric Albert bag, and new interpretations of the Amoako suit.

Why Do Women Entrepreneurs Have to Work Harder Than Men?