By Miles Socha
with contributions from Evan Clark
on January 7, 2021

And Michael Burke, chairman and CEO of Louis Vuitton, will become chairman of the Tiffany board of directors, bringing his vast experience and impeccable track record in luxury to the task.

This powerful trio will be charged with accelerating the growth and intensifying the sparkle of LVMH’s newest luxury jewel, which is sure to transform the French group’s watches and jewelry division.

Ledru takes over from Alessandro Bogliolo, who was widely expected to exit once the transaction was finalized on Jan. 7. WWD had identified Ledru as a frontrunner in a report on Dec. 30, and signaled that Alexandre Arnault was also in the management frame.

However, Bogliolo has agreed to stay on until Jan. 22 to facilitate the transition.

“I am pleased to welcome Tiffany and all their talented employees in our group,” Bernard Arnault said. “Tiffany is an iconic brand and a quintessential emblem of the global jewelry sector. We are committed to supporting Tiffany, a brand that is synonymous with love and whose Blue Box is revered around the world, with the same dedication and passion that we have applied to each of our prestigious Maisons over the years.

“We are optimistic about Tiffany’s ability to accelerate its growth, innovate and remain at the forefront of our discerning customers’ most cherished life achievements and memories. I would like to thank Alessandro Bogliolo and his team for their dedication to Tiffany and their work over the past three years, especially during this challenging period,” he added.

Ledru is Vuitton’s executive vice president, global commercial activities, and will be charged with leading the global expansion and upscaling of Tiffany, synonymous with diamonds, blue gift boxes, and the late Audrey Hepburn.

The Frenchman has logged most of his luxury career in the U.S. jewelry business, rising through the ranks at Cartier over a 12-year career to become vice president of retail until moving over to Harry Winston as global vice president of sales in 2011.

In fact, Ledru had first joined Vuitton as president and CEO of its North American business in December 2014 from Tiffany & Co., where he spent a little under two years as senior vice president, North America, which is Tiffany’s largest market, generating about 43 percent of sales. 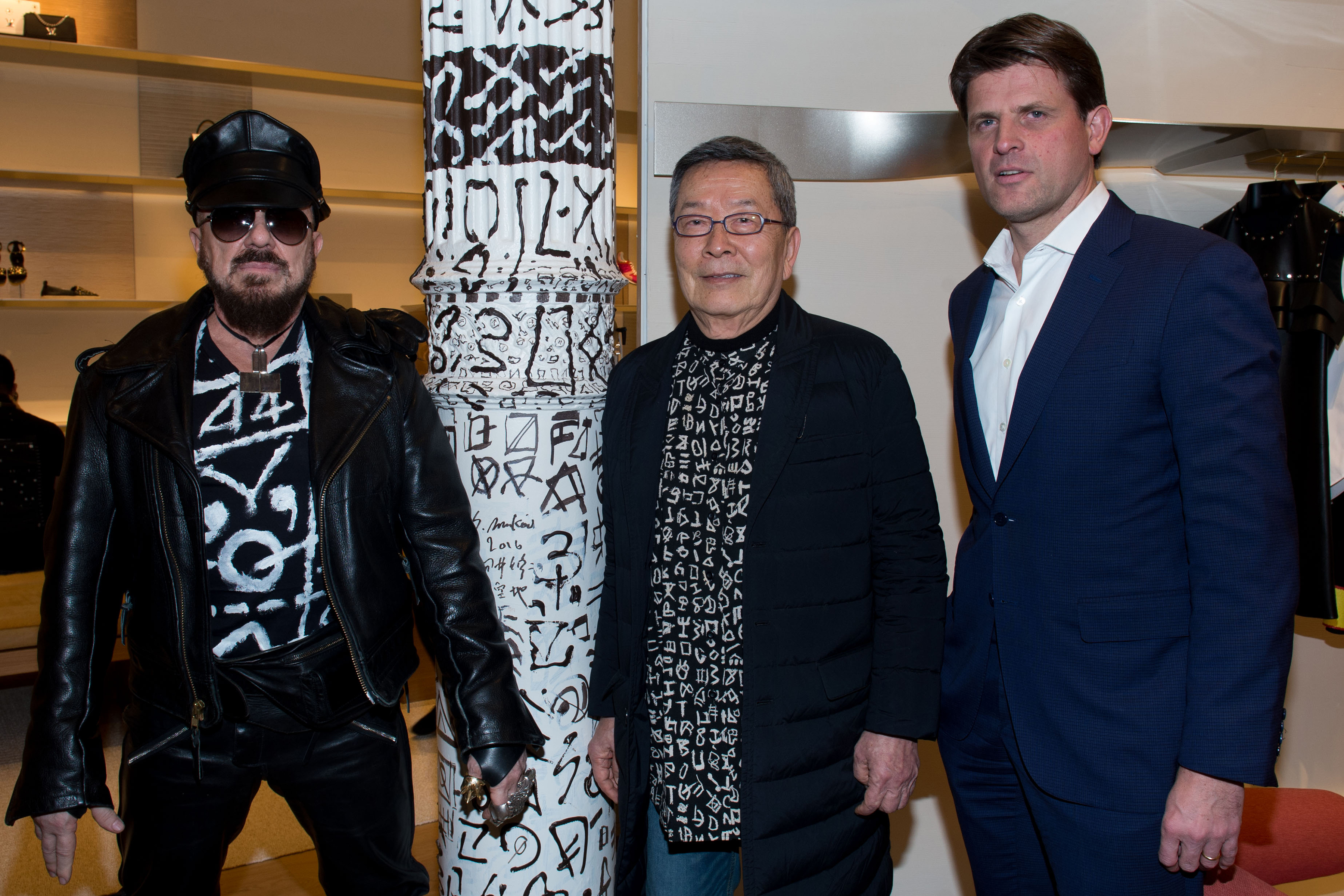 Ledru said he is “delighted to re-join Tiffany, the most iconic American luxury brand which I have long admired.”

“The inclusiveness and optimism upon which Tiffany was founded resonate now more than ever. I also come back to a maison that is at the forefront of the environmental and sourcing standards in its industry. Going forward, I have deep confidence in LVMH’s commitment to protect the brand, drive its growth strategy and apply the highest standards of retail excellence to Tiffany. The potential ahead is limitless, and I look forward to writing this next deeply promising chapter, along with the 14,000 Tiffany employees around the world.”

Indeed, LVMH is expected to spiff up Tiffany boutiques, renew its product range, rev up communications and leverage its expertise in fast-growing China. Luxury analysts say the French group has the financial and management muscle to transform Tiffany into a luxury megabrand.

The luxury giant has a strong track record of grooming executives and recruiting from within whenever a big role opens up, rarely poaching from luxury rivals for CEO roles. The current CEOs at Dior, Fendi, Givenchy and Loewe, for example, all rose through the ranks of either Dior or Vuitton.

Installing Alexandre Arnault at Tiffany also reflects widening responsibilities for Bernard Arnault’s children, and echoes Delphine Arnault’s role as executive vice president of Louis Vuitton, in charge of all product-related activities. Antoine Arnault, CEO of Berluti and chairman of Loro Piana, last year added oversight of LVMH’s environmental department, in addition to his role as head of image and communications at the group, while Frédéric Arnault, the youngest executive in the Arnault clan, became CEO of Tag Heuer last year.

Before joining Rimowa after initiating and leading LVMH’s acquisition of the German firm, he worked consultancy McKinsey & Co., then in private equity at KKR, both in New York. He then joined LVMH and Groupe Arnault to focus on digital innovation.

Rimowa is expected to name a new CEO shortly.

LVMH is sure to apply its formidable braintrust of family members and seasoned executives to ensure the success of Tiffany, which it contends has underperformed in a buoyant consumer segment.

Founded in 1837 by Charles Lewis Tiffany and catapulted to a higher plane by his son Lewis Comfort Tiffany, the jeweler has served the wealthy — both old and new money — ever since it was established. As of the end of March 2020, it operated 326 stores worldwide.

LVMH first agreed to buy Tiffany for $16.2 billion in November 2019 in what was billed as the largest acquisition in the luxury space. But that was pre-pandemic.

After the coronavirus began making its way around the globe, causing mass shutdowns, LVMH seemed to get cold feet. Last September, the French group said it was walking away from the deal, sparking a war of words and multiple lawsuits that threatened to derail the mega deal.

But by October, the parties reached a truce in order to avoid legal proceedings seen as harmful to both sides. At the end of 2020, Tiffany shareholders overwhelmingly approved an updated acquisition agreement calling for a $131.50 in cash per share purchase price, compared with the original offer of $135 a share. That amounted to about $420 million in savings for LVMH.

Tiffany is no longer a public company, but an indirect, wholly owned subsidiary of LVMH, whose vast stable of fashion, beauty, liquor, hospitality and retail brands brands includes the jewelers Bulgari, Chaumet and Fred.

Despite an uneven performance performance earlier in 2020, Tiffany’s earnings shot up in its most recent quarter, which ended Oct. 31, by 52 percent to $119 million, beating out analyst expectations. E-commerce sale were up 92 percent during the quarter.

Among Ledru’s first challenges will be to galvanize Tiffany’s 14,000 employees behind LVMH’s ownership and strategy, and smooth over any lingering acrimony among top brass and board members.

Bogliolo joined Tiffany from Diesel in 2017 and sought to boost growth in China and through omnichannel initiatives while also raising average unit retail prices and accelerating product innovation. The executive stands to receive a change of control payout in excess of $44 million, according to LVMH.

Bogliolo and Krakoff were key in helping turn around the plodding Tiffany, modernizing the company with a focus on China, elevating the brand and expanding with The Blue Box Café, three distinct high-jewelry collections, and Tiffany Paper Flowers, which runs from fine to high jewelry.

It is understood that Krakoff is not being replaced, but that the company would operate with different design studios for different categories in keeping with how many of LVMH’s other powerhouse businesses operate.

Mark Erceg, executive vice president and chief financial officer, told employees late Wednesday that he would leave with the change of power, according to sources.

The leadership team walking out of Tiffany managed to steer the company through the pandemic — and through the bruising court battle with LVMH that ultimately led to a price cut in the deal.

While the springtime COVID-19 shutdown hurt Tiffany, the company was bouncing back in the third quarter and for the last two months of the year posted a 2 percent gain in net sales — marking the brand’s best holiday sales haul ever.

Alessandro Bogliolo on Tiffany’s Path Through the Pandemic