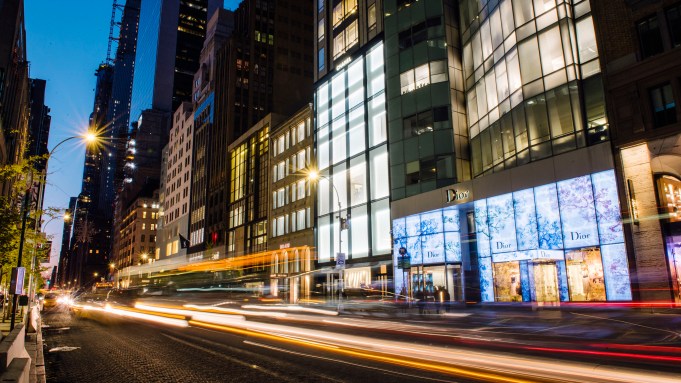 New York’s 57th Street may not be as grand as that Paris strip, but it is certainly a hub of retail transformation and luxury one-upmanship. Nordstrom, David Yurman and Ermenegildo Zegna are all moving in next year, retail rents are stable, brands including Sephora and Ulta are said to be combing the thoroughfare for sites — and a clutch of supertall, superluxurious residential towers has been sprouting since 2014.

Chanel almost doubled its presence on 57th Street with a flagship at No. 15 East that’s being unveiled this week; Tiffany is renovating and has temporarily taken over the former Nike space at 6 East 57th Street; Swiss watchmaker Richard Mille last month opened its largest store, a two-story, 4,200-square-foot unit at 46 East 57th Street, and Savile Row tailor Richard James will open soon on the northeast corner of Park Avenue and 57th Street.

Bergdorf Goodman, which recently reconfigured its main floor to create a “a jewelry store within a store,” is expected to convert what were offices on floors eight and nine into 24,000 square feet of selling space for categories currently not carried or to beef up some categories considered underspaced, such as footwear.

Yurman is relocating to 5 East 57th Street from Madison Avenue and 63rd Street, with a 5,000-square-foot showcase for the designer’s medley of high jewelry, women’s, men’s, wedding and timepieces.

And Zegna has taken a duplex in the Crown Building next to Bulgari, which last year overhauled its site with an ornate, multimillion-dollar design by Peter Marino with a striking bronze rosetta-patterned facade and Pantheon-esque marble colonnades.

Yet the biggest change is yet to come — Nordstrom’s 320,000-square-foot women’s store. It’s scheduled to open in the fall of 2019, on West 57th Street between Seventh Avenue and Broadway. With the immediate area largely devoid of better fashion retail, Nordstrom may seem isolated, at least initially. Retailers and real estate experts believe the Seattle-based department store will have a profound impact by changing pedestrian traffic patterns, attracting stores to the neighborhood and by triggering a strong response by competitors such as Bloomingdale’s, Bergdorf’s and Saks Fifth Avenue, which will work hard to defend their market shares. They’ve all been renovating and will beef up service levels as an opening date for the Nordstrom flagship approaches.

“It wasn’t really our goal to do something pioneering,” said Pete Nordstrom, copresident of Nordstrom Inc., explaining that the Nordstrom family chose West 57th Street for their New York flagship because it met several conditions. It’s a busy and financially healthy part of the city, filled with tourist traffic and large office and residential populations from the tristate area, and the store would have a very conspicuous street presence. Nordstrom also likes the proximity to Central Park. “It makes New York special and we are a block away,” he said. “That’s great for us. The number-one tourist destination in the city is Central Park,” said Nordstrom.

“We want to be in and around a lot of activity and great retail,” Nordstrom said. “We are not looking to be by ourselves. In any project, we believe we help to attract others.”

As it stands now, 57th Street is a mix of the new and old with long-standing destinations like the Brooklyn Diner, The Russian Tea Room, Calvary Baptist Church, Carnegie Hall, Hammacher Schlemmer, Mr. Chow, CBS, The Art Students League and the Four Seasons Hotel. It’s a wide, two-way street running 2 miles east-west from a small park by the East River to the city’s Department of Sanitation dock on the Hudson River. It’s bookended by residential buildings with doormen and small businesses and conveniences like dry-cleaners, banks, wine shops and hair salons for the locals.

Closer to its midsection, 57th Street is home to prestigious art galleries, restaurants and expensive fashion shops primarily from Park to Fifth Avenues on the north side of 57th Street, including Louis Vuitton, Saint Laurent, Burberry, Miu Miu, Fendi and Coach.

The corridor has become known as “billionaires row,” so named for all of the supertall residential towers that have sprung up on 57th Street over the last five years, casting shadows on Central Park and reshaping the skyline. Among the high-risers are those at 605 and 601 West 57th, 432 Park Avenue (between 56th and 57th Streets), which is considered the tallest residential building in the western hemisphere, rising 96 stories, and the second tallest building in the city; 111 West 57th, and 225 West 57th Street, which the developer Extell says will be the world’s tallest residential building at 1,550 feet high, with a spire reaching another 200 feet. Nordstrom’s women’s flagship forms the base of the building. Nordstrom men’s store, which opened in April, is just west on the opposite side of Broadway between 57th and 58th Streets.

The 57th Street corridor is pockmarked by vacant storefronts and developments, though the vacancies aren’t as prevalent as other parts of the city such as Madison Avenue. Prime available spots include the Fuller Building on the southeast corner of Madison and 57th Street; 6 West 57th Street where a mixed-use development is going up; 432 Park Avenue, which fronts 57th between Park and Madison and advertises 6,300 square feet available for retail, and a big space vacant just east of Coach on the northeast corner of 57th and Park.

With all the activity, 57th Street, in terms of higher-grade retailing, remains spotty, lacking the kind of continuity evident on Fifth and Madison Avenues. It has yet to recover the panache it had until the departure of Henri Bendel to Fifth Avenue in 1991 (where it will soon close for good) and Charivari, which specialized in avant-garde fashion but closed in 1998. With the west side of 57th, it’s home at one time or another to various temporary fashion flagships including Gucci, Burberry and Club Monaco.

“57th Street is a through-street. It’s very busy, but it’s not a grand boulevard like the Champs-Elysées,” said Gene Spiegelman, principal and vice chairman at Ripco Real Estate. “It’s a thoroughfare that bridges different neighborhoods operating in segments. Most of the evolution will be from Fifth Avenue to Eighth Avenue, but it’s another decade in the making.” Spiegelman called the block between Fifth and Sixth Avenues the “enigma block,” explaining, “If Nobu didn’t open, there would be nothing there,” aside from Bergdorf’s and Zegna, which is on its way.

“57th Street has always been very choppy. A lot of the spaces aren’t pretty,” added Faith Hope Consolo, chairman of The Retail Group of Douglas Elliman Real Estate. “The best spaces are between Park and Fifth, but Nordstrom will absolutely be a magnet to pull retail to the west side. It won’t all be luxury and there won’t be Zara or H&M. They already have big spaces on Fifth and Sixth Avenues. More likely, it will have to be midrange or aspirational retail. I also believe the Time Warner Center, (which houses The Shops at Columbus Circle) has been generating a lot of the activity.”

Consolo said rents range from $550 to $600 per square foot from Fifth to Eighth Avenue, and from Park to Fifth Avenues, they hover around $1,000, though other real estate sources said rents can go up to $1,400 on the east side. She characterized rents as “very stable” and not affected much by vacancies.

“For the first time in a very long time, I feel good about West 57th Street,” Consolo added. “It has the possibility to become a real strong shopping street. There’s energy. It’s going to fill in from Fifth to Eighth.”

“Nordstrom is going to change traffic patterns and redistribute the way money is spent at (other) department stores,” predicted Ken Hochhauser, executive vice president, Winick Realty Group, who said he’s been bringing neighborhood retail, including a dentistry, a fitness spa and a wine shop, to 57th between 11th and 12th Avenues. There’s been “an evolution” of retail spurred by the residential towers and heightened consumer spending.

“It makes sense that over next five years or so 57th Street kind of starts to fill in,” observed Les Hiscoe, chief executive officer of Shawmut Design and Construction, which worked on the Chanel project, among other projects. “Rents on the West Side are cheaper than Fifth Avenue or 57th between Fifth and Madison.

Some believe Nordstrom could impact 57th Street the way Barneys spurred change on Madison Avenue after it opened its flagship on 61st Street in 1993. “Madison Avenue’s luxury retail corridor extended further south because of Barneys,” said Matthew Bauer, president of the Madison Avenue Business Improvement District, noting that Baccarat, Lalique, Smythson, Michael Kors, Celine and Balenciaga were among the businesses that arrived to Madison Avenue after Barneys. “Barneys has a strong gravitational pull. It really bridges the central business district of Manhattan, and all of that traffic, with the upper east side,” said Bauer.

“I don’t know we have seen a huge impact with Nordstorm men’s store yet. It’s a relatively small store, but I think the impact of Nordstrom’s women’s flagship opening in the fall will be tremendous,” said Monica Blum, founding president of the Lincoln Square Business Improvement District. “It will bring more retail diversity to 57th Street and our district,” which doesn’t include the Nordstrom stores. “We like to see this kind of activity.”