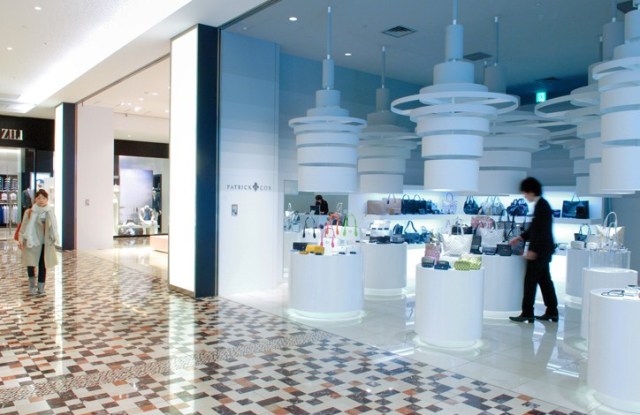 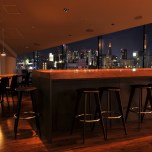 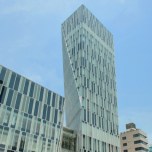 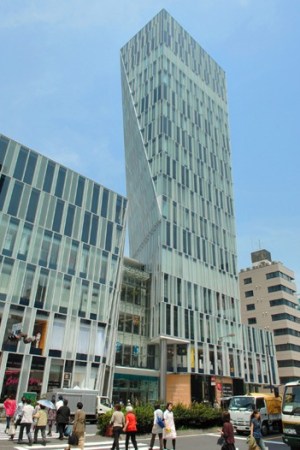 TOKYO — The Ao building, a newly opened retail and dining complex, makes quite an architectural statement — one its retail tenants hope can lure shoppers despite Japan’s downtrodden economy.

The 16-story tower is an asymmetrical feat of engineering, particularly in earthquake-prone Japan. A triangular sliver is cut away from its rectangular form, and the upper floors are actually larger than those beneath them. The glass-paneled structure defies gravity, thanks to an elaborate network of 60 shock-absorbing dampers. The entire complex is even more dramatic at night, when it’s illuminated by colored lights.

But that’s not the only striking aspect of the development in the Aoyama neighborhood off Omotesando Avenue. It’s also the latest destination building to emerge on the scene here, attempting to lure consumers away from sprawling shopping centers and department stores.

The Ao building, consisting of the tower and a squarish structure beside it, hosts a mix of tenants, including Chanel’s first all-beauty store; Naturalizer; Bobbi Brown; RMK, and Kinokuniya, a high-end supermarket known for its imported goods. The building is also home to a crop of fashion and accessories boutiques, such as Tila March, Tibi and Ashleigh Verrier. Two Rooms, a restaurant and bar with an outdoor terrace, occupies the fifth floor and provides some stellar views of the neighborhood.

“I’d like this building to be well-known all over the world,” said Toshiro Tamaki, director of sales at Daisho Co. Ltd., the company that oversaw the project. He declined to disclose an investment figure, but a source at another Tokyo real estate concern estimated the building cost upwards of $200 million to construct and develop.

Tamaki said the building, designed by a relatively unknown architect named Atsutoshi Ozaki, has a scope that is both local and international. It seeks to serve the neighborhood by offering everyday items like groceries and cosmetics, and also put the Aoyama district on the map for foreign tourists, Tamaki explained.

Daisho has secured contracts for all the retail spaces in the building, although some of the office spaces in the upper floors of the tower are still vacant. Tamaki acknowledged filling the building was a challenging task as Japan’s economy sank into a recession over the past year.

“We had incredible difficulties trying to get tenants into this building,” he admitted. “It was very difficult.” Although Daisho stood firm on rents, it helped sweeten the deal by offering retailers some additional space and flexibility to come up with store concepts.

“That is very important for them so they can expose their [brand] name,” he said.

The Ao building, a project that took about four years to complete, is the most recent addition to a constellation of shopping and entertainment buildings in Tokyo.

In late 2007, the Gyre building on Omotesando Avenue opened its doors. Dutch architects MVRDV designed the angular structure — housing Chanel, Bulgari, Maison Martin Margiela — and a host of gourmet food shops and restaurants. On an even larger scale, the Shin-Marunouchi building opposite Tokyo station also opened in 2007 to accommodate restaurants, stores and offices.

Richard Collasse, president of Chanel Japan, said these new retail outposts offer brands some advantages. For one, they tend to provide more space than the average shopping mall. Even a luxurious epicenter like Tokyo Midtown doesn’t offer large enough units to accommodate a Chanel boutique, he said. Plus, these smaller, more focused retail buildings can be a chicer and less chaotic alternative to shopping centers.

“I think that these shopping malls are made for those people who are, you know, starting to build their life, and they have different…priorities,” he explained. “[The mall concept] is very well-done, but I don’t think we can be there.”

As for Chanel’s beauty store in the Ao building, it occupies the ground level, along with two other beauty brands: RMK and Bobbi Brown. Tamaki said he thinks the strong track record of all three brands will help drive traffic at Ao.

“We believe those three can gather a lot of clients for this building,” he said.