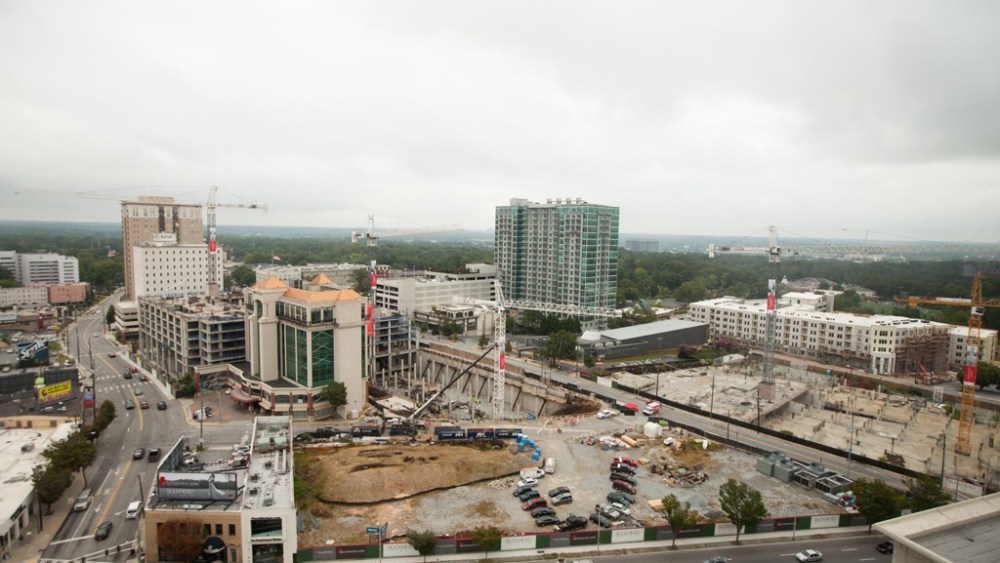 ATLANTA — After a three-and-a-half-year hiatus, construction cranes are back in action in Atlanta’s upscale Buckhead neighborhood to complete what was started before the economy bogged down — a mixed-use luxury project of retail, restaurants, office and residential.

Buckhead Atlanta will begin opening late next year to early 2014, according to Hunter Richardson, managing director of development at OliverMcMillan, the new owner of the property. The last parcel of development will open in spring 2014.

“Retailers recognize that this time frame fits their time frame for the economic recovery, and they want to be ready,” Richardson said.

Located on eight acres across six city blocks, the completed project will offer 300,000 square feet of upscale retail stores, restaurants and cafés, more than 20,000 square feet of office space and 370 luxury high-rise residences, and will provide roughly 2,300 parking spaces. The total square footage will be about 1.5 million square feet.

Morgan Dene Oliver, chief executive officer of the San Diego, Calif.-based OliverMcMillan, declined to name retailers who have signed leases with the exception of Hermès, which has been in a temporary space since 2007. Oliver did confirm that there will be 75 to 80 retail stores upon the completion of Buckhead Atlanta, adding that “a big chunk is already leased.” Hermès will be the first to open in a permanent location.

Ben Carter Properties initiated the Streets of Buckhead in 2006 with a scheduled opening beginning in 2010. Retailers that signed leases then included Loro Piana, Etro, AG Jeans, Vilebrequin and Oscar de la Renta, as well as Hermès. The project faltered in 2009 as retailers pulled out and the economy continued to nosedive. OliverMcMillan acquired the property in May 2011.

“We have a lot of respect for what he [Carter] did,” said Richardson. “It took a tremendous amount of vision on his part and salesmanship to pull it all together. The economy didn’t cooperate. When we were brought in to look at it, we were able to acquire the property in a fashion that allowed us to add an OliverMcMillan touch. We reworked the design in terms of our vision, and that includes lighting, signage, graphics and other details.”

OliverMcMillan changed the name from Streets to Buckhead to Buckhead Atlanta because the latter better “fits the area and is inclusive,” Oliver explained. “It’s not just the streets of Buckhead. We want everything to tie in seamlessly [with the existing village of Buckhead].”

Also, OliverMcMillan has given up density in favor of how people will use the project, Richardson said. Some building space was dropped to add more walking space and green landscaping. Hoerr Schaudt Landscape Architects, known for its work on Michigan Avenue along Chicago’s Magnificent Mile, designed Buckhead Atlanta’s streetscape.

Some of the construction was already done, specifically the subterranean work. Richardson said OliverMcMillan will recycle wood that has been lying around for three-and-a-half years by turning it into mulch, and unused rebar will be recycled for other uses.

The project is providing Atlanta with some much-needed jobs. The contractor, Balfour Beatty Construction, expects to have more than 1,000 workers on-site at peak construction next year, and Buckhead Atlanta will provide about 500 permanent jobs when completed. Said Oliver, “It’s a large job creator, and a lot of revenue will come into the city from sales taxes.”

Richardson added, “For too long, the cranes have been sitting idle, which became a symbol for a stalled economy. Putting them back to work shows growth. This will be catalytic for other projects in the city. It gives the city a positive story.”