It took decades of wrangling with city officials and community groups and financial concessions before Bal Harbour Shops got approval for expansion.

Rendering of a section of the Bal Harbour Shops expansion.

Bal Harbour Shops, among America’s most luxurious and productive shopping centers, has secured a $550 million loan from MetLife Investment Management for its largest expansion project yet.

Located at 9700 Collins Avenue just across from the Atlantic Ocean, the tropical, open-air setting will add at least 241,600 square feet of retail space, bringing the center to 716,000 square feet.

Among the key components of the project: Barneys New York will take 53,000 square feet over three levels to open its first regular, full-line location in Florida with a Freds restaurant with indoor and outdoor seating. Barneys does have outlets in the state.

In addition, about 40 spaces for retail tenants are being created; Neiman Marcus is expanding; Bottega Veneta, Saint Laurent, Etro and other brands will relocate to larger spaces; a half-dozen food and beverage establishments and possibly a Citarella-type market will be added on top of the six restaurants already in the center, and a new parking garage and redesigned entrance will be built for easier access and to ease traffic off Collins.

The biggest challenge will be to safeguard the center’s unique character and upscale shopping experience while offering a wider array of shopping and dining options.

“We are spending a fortune to duplicate the experience.” 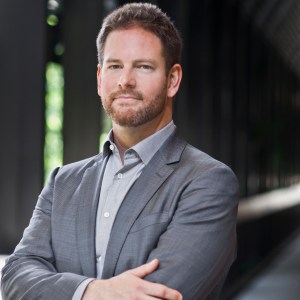 Lazenby’s grandfather, the late Stanley Whitman, founded Bal Harbour Shops in 1965 as the first all-luxury fashion center in America. After visiting retail venues around the world, Whitman developed a clear and radical vision for the property. He saw the potential in luxury long before the rest of the shopping-center industry and believed in bringing the tony retailers of Fifth Avenue to Miami Beach and creating a posh setting for them with fine restaurants and other amenities. He foresaw Miami as a tourist mecca that would only grow, and tourism and luxury as a potent combination.

“His whole thing was to create luxury shopping in a lush garden setting,” said Lazenby. “That heritage is critical to who we are. It informs every part of Bal Harbour Shops. We’re not trying to reinvent the wheel. The formula we have works. We are sticking to it.

“Frankly, I’ve heard from a number of families speaking any number of different languages, taking a 15-minute drive to get here or flying in from another continent, telling me ‘don’t mess this up.’ That definitely is the refrain.

“Bal Harbour Shops will look the same. We’re really a study in white and black in terms of the buildings and a lot of green in terms of the landscaping.” Even the koi ponds will be replicated.

Lazenby is targeting a late 2023 or early 2024 completion of the expansion, though Barneys is expected to open in 2023. Barneys is the only new tenant revealed so far. Others won’t be unveiled for another 18 months or so, Lazenby said. 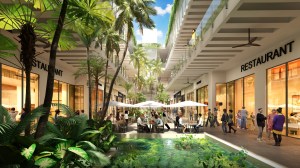 A rendering of the new restaurant section in the expansion.

He underscored the value of extending the food and beverage offering. “Carpaccio and Makoto generate $20 million of business a year,” each, Lazenby said. “These are strong operators who can pay as much rent, if not more, than traditional retailers.”

Lazenby also suggested including a small prepared food Citarella-type market; some local retailers or artisans to add to the center’s uniqueness, and a grouping of European designer kids stores. The center does have a luxury children’s shop called Couture Kids.

With the loan, Lazenby cited advantages of having a single lender rather than a consortium, as is often the case with such a large loan. With Met Life, he said, “There’s a willingness to defer to our proven expertise. They don’t try to micromanage.”

The $550 million loan has “a few different buckets,” Lazenby said. The bulk will pay for the construction, which is less expensive than initially estimated due to changes in plans. Below-grade parking and a third level of retail were nixed. Instead, in the wing where Barneys is entering, there will be parking on three; levels one and two will have retail. “The initial plan on the third level of the new building was to be retail, but we will make it parking with the ability to switch to retail. It’s being designed as prefab steel plates to serve as intermediate parking decks. We could remove the plates to have full retail.”

The expansion was approved by the Bal Harbour City Council in May 2017 after decades of Whitman and his family seeking permission and being stymied by local politics and community concerns that were ultimately resolved. The agreement requires Bal Harbour Shops to provide a “significant” range of benefits to the community, including a new village hall, landscaping on areas surrounding the center, and improvements to a waterfront park, which the loan helps pay for.

Some construction has already happened. A sound wall was built in 2017 so residents nearby wouldn’t be disturbed by construction noise. Also, construction on a larger vehicular entrance off Collins began in May. “That work should end in November. Once completed, the next day we begin going vertical on the major parking garage on 96th Street,” Lazenby said. “Once that garage is completed, we will demolish the existing garage where the new retail will be.”

Through its 54-year history, the family-owned Bal Harbour Shops has grown in “fits and starts,” Lazenby said. The current expansion is the seventh growth maneuver.

“During periods of intense construction, sales grew,” Lazenby noted. “We’re cautiously optimistic the same thing will happen. We are not forecasting any sales drops during construction.

“We could get it done a lot faster if we weren’t so focused on preserving the day-to-day experience. Any expansion in any existing center is complicated. But with centers that target luxury tenants, consumers have a level of expectation that’s a little higher.”

He said the loan is “customized, really like a giant line of credit,” where the lender is “looking less to value we will create and more to the value we already created.”

Bal Harbour Shops was the first shopping center to break $1,000 and later $2,000 in sales per square foot. At one time, it eclipsed $3,000, yet in recent years it’s slowed down with tourism declines and shifting consumer spending habits. There’s also increasing competition in Miami’s vast retail market from the Aventura Mall, the Design District, new retail in downtown Miami, and the Internet.

“Our total sales peaked in 2014 at nearly three quarters of a billion dollars, nearly half a billion of which was from in-line sales,” Lazenby said. “We fell off in 2015 and fell further in 2016.  We reversed the trend in 2017, slowly started to gain ground and were up big in 2018, particularly the first two quarters.  Today, we’re essentially flat against the significant growth over the past two years. So compared to the 2014 peak, we’re about 8 percent away from eclipsing that record.”

Lazenby added that from 2014 to 2018, Bal Harbour’s net operating income increased 25 percent and has doubled since 2010, though as a closely held family business, NOI specifics aren’t disclosed.

“What this points to is that Bal Harbour Shops’ value proposition, as determined by our world class tenants and ultimately by our end customer, is more than just the sum of its parts or even of its stores’ sales,” Lazenby said. “This is the paradigm shift that the industry is just beginning to understand — that the true measure of a store’s value is in the sales it influences, regardless of where or via what medium that sale is ultimately consummated. And that’s why the experience — that emotional connection to the customer — has always been and will always be at the heart of everything we do.” 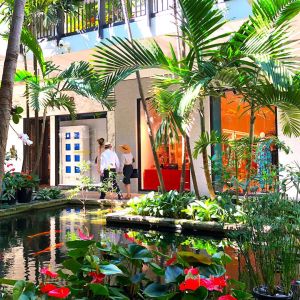