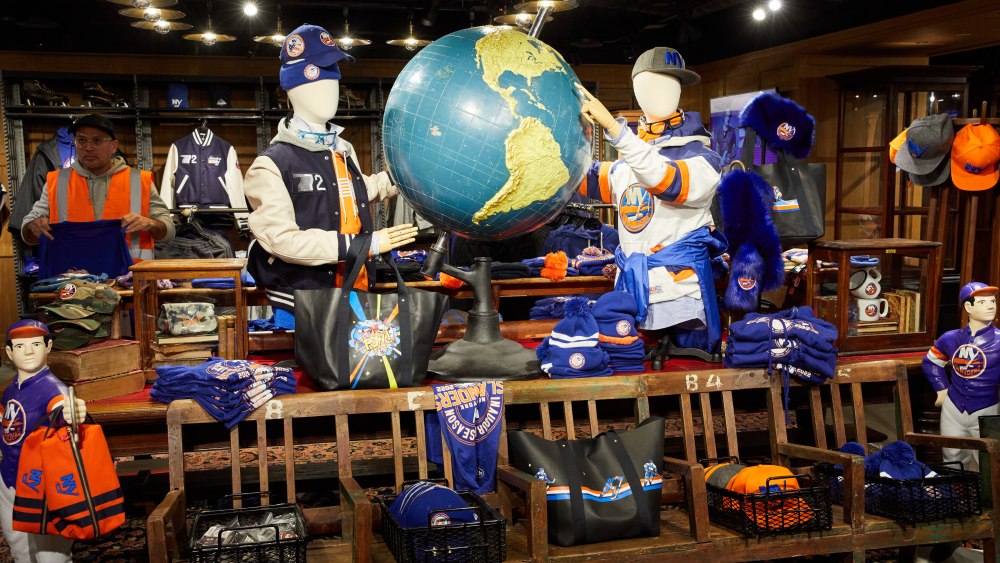 A historic patch of New York is getting a radical makeover, with European flair, in a mega-project that unites many of property giant Scott Malkin’s passions: professional ice hockey, luxury retail and high-end hospitality.

On Saturday, Nov. 20, the first part of a multiyear, $2 billion dollar project will make its public debut when the UBS Arena at Belmont Park opens for the first home game of the New York Islanders, the ice hockey team that Malkin co-owns.

Later this month, the arena, which is next to Belmont Racetrack in Elmont, N.Y., will also host Harry Styles, one of 150 events set to take place annually. According to the project’s partners — the New York Islanders, Oak View Group and Sterling Project Development — the arena was “made for music, and built for hockey.”

It will also be a gateway to high-end retail.

Across the parking lot, Malkin’s Value Retail is building Belmont Park Village, the first North American outpost of the Bicester Village Shopping Collection, a network of luxury brand outlets that stretches from the U.K. to Continental Europe to China.

Construction on Belmont, which will be the 12th village in Value Retail’s portfolio, is projected to start in the first quarter of 2022, with the space set to open in early 2024. According to Value Retail, there is room for more than 160 international and luxury brands across some 340,000 square feet.

A four-star, boutique hotel, along the lines of the resort that Malkin built on the seafront in Oceanside, Calif., is under construction, too, although no opening date has been announced. The Belmont hotel could cover up to 210,000 square feet, with 250 rooms.

Overall, the Belmont campus project is aiming to turn the traditional notion of a sports stadium, and an outlet shopping center, upside down.

The arena, which spans 700,000 square feet and can host 17,000 people for a hockey game and between 15,000-19,000 for concerts, will share vintage architectural features with the village. The design of both spaces has been drawn from early 20th-century New York art deco, the Jazz Age and the novels of F. Scott Fitzgerald.

The design chimes with the history of Belmont Racetrack, which opened in 1905. A syndicate headed by August Belmont II and former U.S. Secretary of the Navy William C. Whitney were looking to build a fancy, European-style racetrack, and to set a new standard, and aesthetic, for the sport in the U.S.

The young Jacqueline Bouvier, the Wright Brothers and Thomas Edison were among those who attended Belmont in those early days, while famous horses including Secretariat, Seabiscuit and Cigar thundered around its track.

The new arena takes its cues from Grand Central Station and the Park Avenue Armory, while the clubs and suites have been modeled on classic interiors of places including Sardi’s and the King Cole Bar at the St. Regis Hotel.

Even the bathrooms stand apart: the women’s bathrooms are larger than the men’s — for once — and are decked in pink marble with gilt-edged deco mirrors, and plush furniture. And the sponsorship is high-end: It’s the private banking arm of UBS that’s headlining the sponsorship, rather than the corporate side.

Reclaimed wood paneling — and even an old apothecary’s desk — imported from Ireland has been used for the Islander’s team store at the arena. Paul Price, formerly of Burberry, has helped with the merchandising, which includes $1,500 cashmere throws. Price was part of a group of top-flight hires from Burberry, Gucci, La Rinascente and Ermenegildo Zegna, that Value Retail made earlier this year.

In an interview, Malkin said he and the Belmont project team were “looking at great civic spaces and buildings with character. Today, everybody’s building modern structures, but they tend to look a bit like one another, and they tend to go out of fashion. We wanted to create a place that felt timeless.”

Although the arena hasn’t officially opened, the team shop is already open online and Value Retail is taking a high-end approach to that, too.

The arena shop offer is just a taste of what’s to come at the village, which is modeled on Value Retail’s 11 high-end outlet centers in Europe and China, the first of which was Bicester, which opened outside Oxford in 1995.

Malkin, who counts the late Marvin Traub as one of his mentors, has progressively put the emphasis on hospitality and experiences at his villages, referring to customers as “guests;” setting up a personal shopping service; bringing buzzy restaurants, such as The Wolseley to Bicester, and creating grand, hotel-like suites for special events or for VIP customers to shop privately.

Of late, the Bicester Village Shopping Collection has been casting itself as a “full-price customer acquisition platform,” for brands, rather than a place to park out-of-season stock. Malkin’s strategy sees the villages host events alongside the big brands, and swap client lists with them, too. Meanwhile, the brands have begun integrating in-season, best-selling products into their stores at the various villages.

According to Value Retail, three out of four guests purchase a luxury brand for the first time during a visit to one of the villages, and 37 percent go on to become full-price clients.

Over the past year the villages have hosted more than 355 special brand events across Europe, and nearly 100 in China, which Value Retail said contributed “significantly” to customer acquisition, average transaction value and spend per visit.

As reported, sales growth through the summer and into the autumn has been accelerating, and overall business in 2021 has now exceeded that of 2019, even with restricted tourist flows in Europe and China.

Can Malkin work the same magic at Belmont?

He is certainly determined, and has experience in North America, albeit in full-price retail. Malkin developed Two Rodeo Drive, the Beverly Hills retail concept which he sold to Sogo in 1991. He has argued in the past that everything Value Retail has done since then is rooted in Two Rodeo Drive’s full-price experience.

Malkin said the Value Retail team is in preliminary conversations about Belmont with brands that already sell through one or more of the villages. He added that 50 of his current brand clients have wanted to see the Bicester Village Shopping Collection expand into the United States.

He’s using a similar playbook to Bicester, and ensuring that people can get to and from Belmont easily. Bicester Village now has its own train stop, and the journey is under an hour from London’s Marylebone station.

Belmont Park Village will benefit from the first, new, full-time Long Island Railroad train station in nearly 50 years. It will have a direct connection to Penn Station in 30 minutes, and Grand Central in 25 minutes. It’s 17 miles from Manhattan, 7 miles from JFK Airport and 13 miles from LaGuardia.

While the village will be well-connected to major tourist hubs, and to a wealthy local clientele, Malkin will have to work to convince shoppers that his offer is a premium one, and the Bicester Village Shopping Collection caters more to the Gucci customer, than the Gap one.

Malkin is certainly prepared to woo, and believes the time is right to plant his flag in the U.S.

“There will be a process of introduction, an adjustment to local conditions, but we will be absolutely true to our core proposition and principles,” he said.

“When we went to China, people said ‘You can never create a European standard in China,’ but we’ve done it, and we will deliver the European standard of shopping, of luxury shopping in North America. The department store consolidation — and commitment to dumping — has massively undermined brand equity there, and destroyed the tradition of the merchant in large-scale, multibrand retailing. The department store programming in America has commoditized brands and damaged them. We exist to support brands and raise their profile.”

Malkin said it’s Value Retail’s mission “to deliver on the vision and history of great merchants like Marvin Traub — and his great festivals at Bloomingdales,” vowing that the “special and powerful retail experience will be at the heart of what we’re doing.”

Perhaps because he’s in a New York state of mind, Malkin compared his vision to what Steve Rubell and Ian Schrager did at Studio 54. The mood may not be as edgy, the guests not as risqué, but the impulse will be to create a unique sense of excitement.

Getting there, Malkin said, “requires hardware, software and an embrace of guest-facing hospitality. But, most importantly, it requires a commitment to curation and to the same dedicated focus that Steve Rubell and Ian Schrager defined at Studio 54. That doesn’t happen by chance. It requires a passion for delivering special moments, great experiences and memorable achievements,” he said.

It will be up to North American shoppers to decide if they’re ready for that kind of retail.