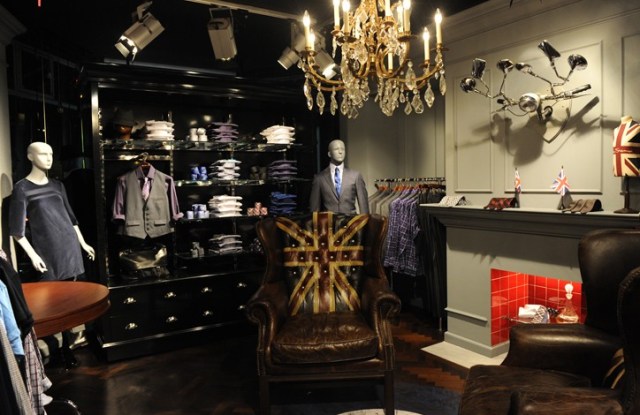 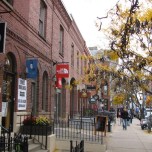 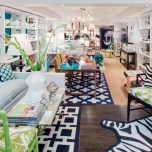 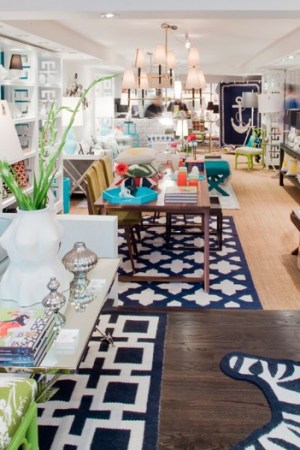 The space at 201 Newbury Street, for example, was a Gap store last year: classic white walls, steel fixtures and folded basics. Now it’s a Ted Baker boutique decorated in a Mad Hatter’s Tea Party theme with fake ivy climbing the walls, dressing rooms draped in cognac velvet and tea served in gilded cups out of the stockroom. One block east, another mall stalwart, Pottery Barn, is vacating a 7,000- square-foot store while Jonathan Adler, whose take on housewares (breast vases, needlepoint backgammon boards) is irreverent, opened across the street in November.

“We’re definitely seeing more individual designers with distinct personalities come in,” said Tom Brennan, vice president of retail for C. Talanian Realty, one of Newbury Street’s largest property owners and managers. “Sometimes some of the bigger names that do well in the mall don’t do well on Newbury. People shopping here are specifically looking for stores that aren’t in every mall.”

As with Adler, Baker and Ben Sherman, which also opened in November, the trend is toward companies that offer distinctive design propositions and are looking to expand beyond New York and Los Angeles. In many cases, deals come together quickly, propelled by rent cuts of 10 to 30 percent since 2008. Renovations are often minimal and efficient — a coat of paint, a change of sign, and a brisk unlatching of the door for business. Cynthia Rowley, who launched a store in June, opened 13 days after signing her lease.

Overall, it’s been a tough 12 months for Newbury, Boston’s most prestigious shopping venue, which is comprised largely of 19th-century brownstone residences converted to retail. The Newbury Street League, an advocacy group of 200 businesses, said the street is 80 percent occupied. Rents range from $40 to $150 a square foot, said brokers, compared with asking prices that are said to have reached almost $200 a square foot several years ago.

Many spaces sit empty except for leasing agents’ listings. WWD counted 28 vacancies in seven blocks. Louis Boston, one of the street’s longtime anchors, will leave for a waterfront spot on Fan Pier in 2010, emptying about 40,000 square feet at Berkeley and Newbury Streets. Built as the city’s Natural History Museum, the 1864 landmark building lacks traditional display windows. Speculation centers on the building’s conversion into luxury condos.

The newcomers to Newbury, some of whom waited years for the right deal, are pleased to have scored space and they aren’t flummoxed by the loss of a few major chains.

“We do best in a nonmall, edgy street location,” said Miles Gray, chief executive officer of Ben Sherman, who believes the arrival of independent designers bodes well. “We are quite pleased to have those adjacencies. It makes it more comforting.”

Ray Kelvin, founder and ceo of U.K. label Ted Baker, estimated the store’s rent at 30 percent less than it would have been before the recession. “We’re a slow-burn brand,” he said. “We don’t borrow money and we don’t drive too hard. We’d been looking for several years for a prominent location like this and we’re going to enjoy and develop it.”

Jonathan Adler, who did a minimal renovation and is relying on cheerful housewares (priced $10 to $5,000) to suit a range of budgets said grandiose, overconceptualized stores were “2006 thinking. My focus is to get the customer up close and personal with the stuff I work so hard to make.”

Intersected with cross streets named in alphabetical order from A to H, Newbury has several distinct shopping zones. The Arlington through Clarendon blocks (home to Chanel, Akris, Armani, Cartier) near the Public Garden remain most prestigious, but the highest foot traffic and occupancy is at the opposite end, Gloucester to Hereford, where American Apparel, North Face, Ed Hardy, Rugby, Urban Outfitters, Madewell and others cater to the college crowd.

For the most part, it’s the middle blocks, Dartmouth through Gloucester, that are in flux. Art galleries are bowing out; medi-spas, casual restaurants, small-footprint designer stores and pop-up stores (Seven for All Mankind’s Wash House, for example) have arrived.

In July, breaking with his custom of promoting a gentrifying neighborhood, Mayor Thomas Menino toured Newbury Street with a group from the International Council of Shopping Centers for the first time in years. At the time, 40 storefronts were vacant — roughly one-third have since been filled.