Although known for its lavish diamond necklaces and decadent watches, Bulgari is getting more accessible. 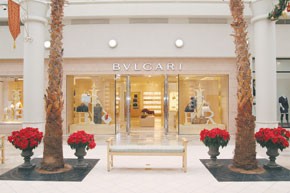 Although known for its lavish diamond necklaces and decadent watches, Bulgari is getting more accessible.

The Italian jeweler has opened stores in Boca Raton, Fla., and St. Thomas in the U.S. Virgin Islands. The company has also launched e-commerce on bulgari.com so anyone across the U.S. can have access to more than 800 styles including watches, jewelry, leather goods, accessories and gift items. Items on the Web site range from just under $200 to in excess of $38,000. Some higher-priced jewelry will be shown on the site, but won’t be sold.

The 30,349-square-foot Boca Raton unit, located in the Town Center, is a “twin store,” a concept in which the company places one of its jewelry stores next to one of its accessories stores, which offer handbags, belts and eyewear. The stores appear separate from the outside with two entrances, but are connected internally.

“We are proud to inaugurate our newest twin store in Boca Raton,” said Francesco Trapani, chief executive officer of the Bulgari Group, in a statement. “This further opening in the United States represents another important occasion for Bulgari to reinforce its presence in the country and to highlight its constant commitment for high quality, style and design.”

The 1,400-square-foot St. Thomas store opened this fall. All product categories are sold in the store, including bridal jewelry, which the company is pushing.

“The opening is a natural pairing,” said Trapani of St. Thomas, calling the island a “favored destination for international travelers and discerning shoppers.”