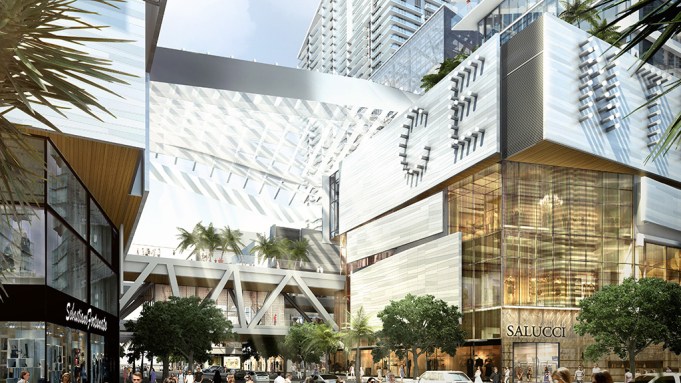 Chopard and Valentino will be the first two luxury tenants of Brickell City Centre’s 500,000-square-foot shopping center in downtown Miami.

Brickell City Centre is being developed by Swire Properties, which is working with the Whitman Family Development and Simon Property Group,  co-developers of  the retail component .

Debora Overholt, senior retail director at Swire, said the shopping center will have about 140 doors, including “about 70,000 square feet of food and beverage, which is really important for our project. We’re curating a merchandising mix that’s compelling for Miami. It’s wider than just typical luxury brands.”

The luxury retailers will be located on level one of the project and account for about 25 percent of the gross leasable space. The second and third levels will connect to the Metro Mover and feature tenants requiring higher footfall. Overholt said premium tenants similar to Michael Kors, contemporary brands and fast-fashion brands, residing on the second and third floors, wil

l account for about 50 percent of the center’s space.

“We’ve had a really interesting demand for emerging brands focused on the Latin American markets,” Overholt said. “We’ll have almost a whole separate category, new to the U.S. and to Southern Florida. We think these designers will be a really strong niche for us. Some of the designers may have some representation at Neiman Marcus, but now they’re seeing enough demand to roll out in the U.S.”

Overholt said there will be five to ten Latin designers occupying about 15,000 square feet.

“Miami is becoming a world-class city and growing in many facets from entertainment to the arts to business,” Overholt said. “It’s becoming more competitive with cities like New York.”

Brickell City Centre isn’t the only project rising in Miami. A partnership between Forbes and Taubman Cos. is developing the retail component of Miami World Center. And the Miami Design District has been growing.

“It’s been very underserved,” Overholt said of Miami in terms of retail. “It’s also been cost-prohibitive.” Brickell City Center has been able to negotiate the costs in part because “the mixed-use property allows retail to be just one component.”