The Dallas Market Center works to enhance the show experience for buyers. 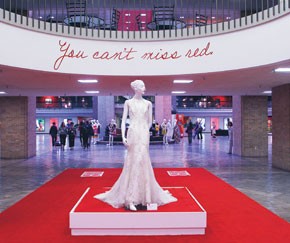 DALLAS — Come January, FashionCenterDallas will boast a room with a view.

A 15th-floor bar with a dramatic skyline vista and a balcony will open Jan. 24, the first day of the women’s fashion market.

Called District 15 Lounge, the space is located in a corner of the newly branded contemporary area of FCD, reflecting the Dallas Market Center’s commitment to that business.

“We invested in District 15 because we want people to look at it as a destination,” said Bill Winsor, chairman and chief executive officer of the DMC. “We have such a strong representation in contemporary, and they really deserve their own environment. We wanted to do something special.”

Several showrooms within District 15 have expanded this year, including Johnny Was and BCBG, and new ones have opened, such as Robert Graham and Saltaire.

The concept has earned accolades from exhibitors.

“This branded contemporary area is the best I’ve ever been in,” said Scott Friedland, creative director of Zissou & Spike, a maker of French terry sweats that were introduced to Dallas at the October show. “I’m extremely impressed.”

January will bring other changes to the DMC, including an effort to develop closer relationships with independent retailers.

The DMC’s retail development team has been researching new stores and developing resources for them. Business tips for independent retailers, such as an industry glossary, advice on planning inventory and strategies for tackling the market, will be archived on the DMC’s revamped and expanded Web site (dallasmarketcenter.com), launching in January.

“We see our own growth coming out of new stores,” Winsor said. “We want to get information into their hands.”

Buyers will also start seeing more e-mails regarding products and events specific to the merchandise they carry.

“We feel strongly about being connected to these stores almost on a personal level,” Winsor added.

The strategy reflects the DMC’s recognition of the trend toward product customization. The company’s executives have all read “The Long Tail” by Chris Anderson and are applying his theory that demand for niche goods and services is increasing.

They are working to increase the breadth of merchandise in the World Trade Center, where FCD occupies 1 million square feet on the top floors. Temporary fashion exhibits are up 20 percent this year, according to Cindy Morris, chief operating officer.

“You have to be so broad in categories of product so retailers can come in and buy whatever they want,” she said.

Kids World, clustered exhibits of juvenile toys, furnishings and other products, is taking root on the eighth floor of the World Trade Center, where children’s apparel was already located. Kids World will make its debut at the gift show Jan. 16 to 22 and the apparel market Jan. 24 to 27.

In addition, the DMC secured a three-year commitment from the Toy Industry Association to hold its annual Fall Toy Preview exhibition at the World Trade Center. The first is set for Oct. 14 to 17.

With nearly 7 million square feet of exhibit space, the DMC bills itself as the largest wholesale merchandise mart in the world. Annual wholesale transactions add up to an estimated $7.5 billion.

“Business is cyclical,” Winsor said. “We’re not overly subscribed in any business. We keep ourselves diversified.”