Tim Headington, a low-profile billionaire, is intent on revitalizing the downtown area in partnership with L.A. stores TenOverSix and Traffic Los Angeles. 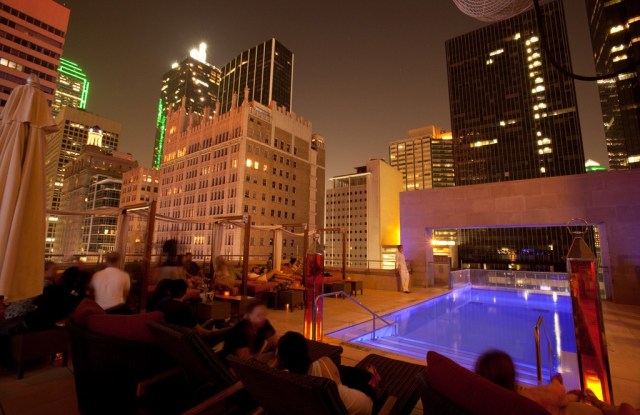 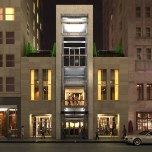 “We want to help develop an authentic urban neighborhood,” said Michael Tregoning, chief financial officer of Headington Cos. “We want to create a local and regional destination, a district that can be separately marketed and identified with a unified approach.”

Headington, a low-profile billionaire who walked the Academy Awards red carpet virtually unrecognized as coproducer of Oscar winners “Hugo” and “Rango,” is intent on revitalizing downtown and the cluster of properties he’s snapped up there.

With its important modern art, interiors by Adam Tihany and glass-ended pool overlooking downtown from the 10th floor, The Joule has been a hot spot since its 2008 opening.

Neiman Marcus, the sole surviving fashion retailer in the central business district for decades, has worked closely with Headington.

“Tim is a game-changer for downtown,” said Shelle Sills, vice president and general manager of Neiman’s flagship. “He and his group have passion for it. We embrace and encourage retail coming back downtown, and we are doing everything that we can do as shareholders in this whole revitalization.”

Neiman’s and other businesses, developers, city planners and philanthropists have been working nearly 20 years to restore life to downtown’s desolate skyscraper canyons.

The drive birthed residences, restaurants, hotels, theaters, nightclubs, parks, charter schools, light rail and the massive Arts District, which the city bills as the largest nationwide. The central business district employs 135,000 people, and residents have multiplied to 7,500 with a total of 38,000 residents within a 1.5 mile radius, according to Downtown Dallas.

Neiman’s flagship is widely viewed as a unique business that thrives on relationship selling to mature Highland Park women rather than depending on foot traffic, and some observers doubt whether downtown can support edgy high-end stores that aren’t homegrown.

Several fledgling independents, including Crimson in the City, Dallas Fashion Incubator and Benji’s Collezioni have tried and failed over the past decade to operate fashion boutiques near Neiman’s flagship.

But walk-in traffic has grown over the past five years, Sills said, and the store no longer does the biggest percent of its business on the phone. Though the flagship is known for designer ready-to-wear and accessories, sumptuous furs and jewels, it has been courting a younger customer with contemporary labels, and the fourth-floor Cusp boutique opened last year.

Headington, who has an undisclosed ownership position in the new stores, is a powerful partner.

“While it might seem a little early for the retail portion of The Joule redevelopment, with the Headington vision, talent and resources, this will be successful over time,” predicted Alan Shor, president of the Retail Connection real estate and consulting group. “Being next to the Neiman Marcus flagship is a real positive for the project.”

“There is the potential to create something that does not exist in Dallas,” added Michael Moldovan, an owner of Traffic Los Angeles. “We went to see all the stores, and I do feel that our category is completely missing. It’s funkier, more out-of-the-box. What I saw was Cucinelli everywhere and black, gray or beige. It looked like 1984. It needs a push.”

Moldovan, who dresses movie stars and recording artists, said he has a “licensing agreement, a partnership” with Headington Cos. to open the stores. He plans to stock Dolce & Gabbana, Comme des Garçons, Rick Owens, S.A.D. and Giorgio Brato for men, and Isabel Marant, Vivienne Westwood, Jerome Dreyfus, 3.1 Phillip Lim and Tuesday Night Band Practice for women.

“We weren’t originally thinking about Dallas, but the second we went down there and saw everyone and the city, we thought it was a great opportunity to go into a market that is not completely saturated with stores like ours,” Lee said. “I’m not 100 percent sure of our buy, but we’ll continue mixing Phillip Lim, Rachel Comey, Vena Cava, Pamela Love, Loeffler Randall and Anndra Neen jewelry. We’ll probably bring in Carven and Kenzo, and maybe Band of Outsiders for blazers, and probably Kitsuné. The Dallas customer seems to be very sophisticated.”