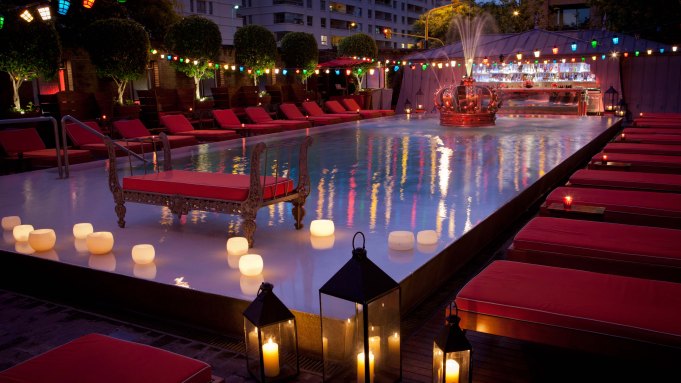 MIAMI — Alan Faena is often described as a hotelier and developer, but the man who completely revamped Buenos Aires’ Puerto Madero neighborhood and is now creating an entirely new district in Miami Beach is anything but the regular hotel entrepreneur.

“I like to create things where, before, there was nothing. So I am a creator, and an artist because my goal is to elevate people, to touch them somehow,’’ said Faena, dressed in white: a T-shirt, an unbuttoned white shirt, a long leopard-print scarf and his trademark Panama hat tilted slightly to the side.

The developer, 53, is again focusing on the iconic waterfront Puerto Madero district in Buenos Aires that he started to design in the early Aughts. The Argentine urbanist said he isn’t sure what the new project there will be exactly, probably a mixed-use space with residences and hotel services. He declined to reveal details about the project, but his eyes lit up when given the chance to talk about how he’s transformed the area. He pulled his chair closer and fired up his computer to show photos of what he described as a revolution in the world’s tango capital.

Just 20 years ago, the area was a wasteland of abandoned warehouses. In 2000, Faena and his business partner, the Ukraine-born American billionaire Len Blavatnik, began in Puerto Madero one of the most successful waterfront regeneration projects in the world.

Dating from the late 19th century, Puerto Madero was built alongside the Río de la Plata, which was too shallow to accommodate large cargo ships. As Buenos Aires quickly grew to become a bustling port city, Puerto Madero became obsolete in less than a decade and a new harbor — the Puerto Nuevo — was commissioned. The abandoned warehouses and silos of Puerto Madero became eyesores for decades.

Faena in the late Nineties saw great value in the area. He convinced Blavatnik to buy a rundown silo built in 1902, and then talked French designer Philippe Starck into collaborating on the restoration. In 2004, Faena inaugurated the hotel, which quickly became a hit and ignited interest in the area from other developers.

The hotel’s red bricks were preserved from the old British-built silo, and replacement pieces had to be ordered from Manchester, where the originals were made. Rich red tones are everywhere in the Faena Hotel: on the velvet curtains, the elaborate rugs and covering the patio lounge chairs, which surround a stunning pool and a golden fountain in the shape of a crown. White leather armchairs adorned with swan wings share the space in guest rooms with lacquer side tables and mirrored armoires. Extravagance is the mark of Bistro Sur, one of the hotel’s restaurants, the walls of which are adorned with white unicorns with ruby-red eyes.

A native of Buenos Aires, Faena started his career at 18 in the late Eighties by launching the fashion label Via Vai. He later added other properties to his Puerto Madero portfolio, including the Faena Arts Center in 2011 and a residential project called The Aleph, the first Foster + Partners building in South America, which opened in 2012.

Now, with Argentina under a new, more business-friendly president, positive sentiment is giving Faena a reason to embark on a new project in the neighborhood. Confidence has improved since President Mauricio Macri took office in December 2015. The charismatic former mayor of Buenos Aires set out to regain the financial market’s trust, reignite growth, control inflation and reduce the fiscal deficit. Shortly after becoming president, Macri ended a long-standing legal battle with “holdout” creditors of a 2001 debt default, helping Argentina gain access to capital markets after being locked out for 15 years.

“Expectations are better because investors feel that the rules are more predictable now, but the economy itself is facing a lot of headwinds still,” said Diego Ferro, cochief investment officer at Greylock Capital in New York. “I don’t see a lot materializing yet, but the real estate sector is where people feel more hopeful because it’s where there is more financing available.”

Even before he embarks on his latest project in Puerto Madero, Faena has a lot on his plate in Miami as he further develops the Faena District in Miami Beach.

In just over three years, with the help of contributors such as film director Baz Luhrmann and his wife, costume designer Catherine Martin, and Rem Koolhaas, Faena turned a sleepy and depressed area of the beach, between the ocean and Indian Creek, from 32nd to 36th streets, into the Faena District. It started with the Faena Hotel, which used to be the Saxony, inaugurated in December 2015, just in time for Art Basel Miami Beach.

Just like the original Faena Hotel in Buenos Aires, Miami’s 169-room location doesn’t have a lobby. Visitors and guests walk into a cathedral, with gilded columns and eight vividly colorful and intricately painted floor-to-ceiling panels, which Faena said are windows into his soul. They were painted by Argentinian artist Juan Gatti, who also helped design the mosaic tiles that decorate the perimeter of the cathedral. Huge glass doors open to the garden where a $15 million Damien Hirst mammoth seems to watch over the beach.

While the Buenos Aires hotel has a more dramatic and theatrical feel to it, the Miami property exudes Fifties glamor. Faena sought to re-create the decor of the Saxony, one of Miami’s first resorts, with touches of Art Deco fantasy. And Argentina is very much present, from the Andean-inspired uniform of the therapists in the Tierra Santa spa, to the off-white bed shawls embroidered with red flowers in the suites. Red is also present in curtains and rugs, but in lighter combinations with teal and turquoise.

The district also includes the Faena Forum, an arts and cultural center designed by Rem Koolhaas’ OMA, in the shape of a cylinder with nearly 400 irregularly shaped windows that look like they were punched out from the inside. One of the art center’s spaces is an amphitheater made of Portuguese pink marble. In another space, Madonna built a circus to host her Raising Malawi fund-raiser during Art Basel last year.

As he talks about his projects, Faena is surrounded by art in a trailer out of which he works, parked in front of the beach behind the construction site of his latest development in the district. It’s a Thirties building that may turn into another hotel. Inside the trailer are rugs, paintings, seashells, glass reproductions of corals and Patagonian artisanal textiles, surrounding a long conference table with chairs.

“These are all important references for me, it’s who I am. I bring all these ideas together, and I work with other great artists and creators to produce a truly unique experience,” Faena said, adding that a sharp business sense has always helped him in all his endeavors. “I’ve always had to fight hard for what I believed in, always going against the odds.”