The California Market Center is still home to some brand showrooms, but now more a center of office and retail space in burgeoning downtown L.A.

LOS ANGELES — Brookfield Properties knew it was taking on a unique investment with the California Market Center, but there were still surprises along the way.

“Quite frankly, if we were building a project from the ground up, it would be a lot easier,” said David Foley, vice president of operations at Brookfield Properties, who’s been overseeing the CMC project. “This is one of the few properties we have with the fashion industry actually in it, so this took us some more internal thought. It was a little bit of a challenge.”

There have been the usual trials of any major building overhaul — design, regionality, tenants, cost — but CMC is actually a plot of three buildings with just over 1.85 million square feet on offer. And the handful of tenants still hanging on were spread out oddly between the three mainly empty buildings. Occupancy at CMC was only around 20 percent by the time Brookfield revealed about two years ago that it would invest $170 million in redevelopment (the company declined to comment on whether the overhaul is costing more than that initial figure). In 2017 it took a controlling interest in the building for a reported $440 million. Some of those remaining CMC tenants would introduce themselves to Foley when he started taking tours of the property before the investment was made by first telling him how long they’d been there.

But many of them wanted the building to be something along the lines of an upgraded version of what it already was, and that’s not what ended up happening.

“They wanted the doors exactly the way they were, the lighting to be like it was, and that challenged us, we almost got drawn into that,” Foley said. “We really had to pull back and think, ‘What does the fashion industry showroom look like in the future?’ We were eventually able to see a different vision for the future and that’s what’s in front of us today.”

As for the financials of the investment, with all the redevelopment still under way in downtown, the return will likely be good. Although Brookfield declined to reveal details of lease pricing or even an estimated capitalization rate.

The look of the nearly completed roughly 590,000-square-foot building building — where the showroom tenants are now all housed on seven floors, having just moved back in a couple of weeks ago — is “refined industrial.” But not completely raw. The ceilings are painted black, the walls painted a soft white. There’s a lot of glass line, the floors are a matte finish concrete. Brookfield put the kibosh on brands’ old habits of signage everywhere and clothes hanging all over front glass — now, only a single brand name in roughly two-inch lettering is allowed in one spot on each showroom.

“When you have all these tenants knocking their own drums for years.…I’ve never seen anything like it,” Foley said, referring to the look of individual showrooms before redevelopment started. “People thought the new signage would be one of the biggest gripes. Then people moved in and all those little complaints just disappeared.”

The CMC buildings had been left to languish, essentially since initial building ended in 1970. The tenants who stayed on never even had their own thermostats. Now they have them, along with automated lighting and new plumbing, electric and elevators. Brookfield plans on hosting at least 30 events a year in the space, along with trade shows, and has showrooms for brands to come in temporarily during market weeks.

But when design planning started to get under way, handled by Gensler architect Peter Himmelstein, he was amazed by the “rabbit warren” quality of such a “huge, rambling” building.

“It was almost comical,” Himmelstein recalled. “Endless hallways, every floor had a different design, spots where they’d tried to resuscitate it. But nothing like that would do the trick. It needed completely new thinking and a transformational attitude.”

Although the building where the showrooms will be housed is keeping its dark glass facade, the other two buildings are being stripped down and refined outside. Bigger windows and new floors. A dark, curtained tower of escalators is coming out and being opened up, a series of sky bridges is getting cut down by half and opened up as well. A squat building, formerly a Union bank, now sits in what will be an open air plaza, fully accessible to the public. The bank is getting demolished next month. The goal is to have a bright, open building that opens onto a revitalized center of downtown. 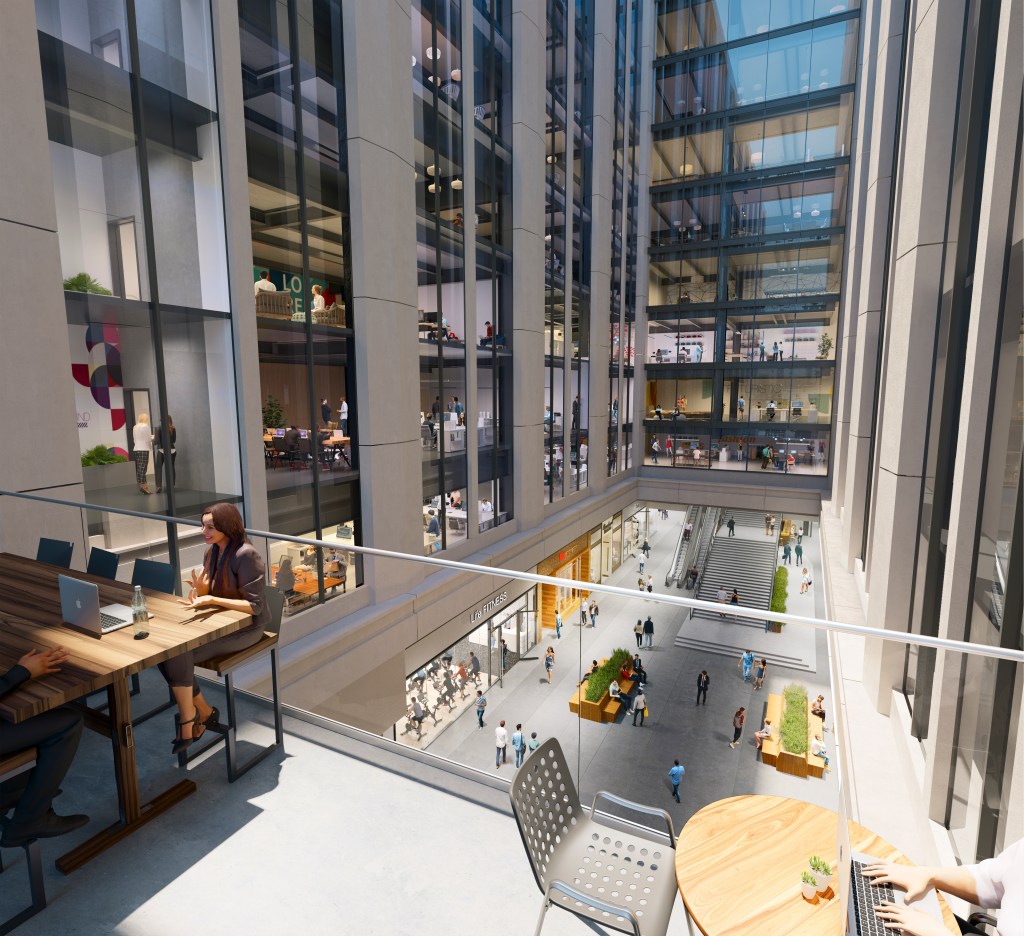 A view from inside the new CMC building.

“There is actually a very muscular, handsome building buried in this dreadful complex,” Himmelstein said. “You go to places and think, ‘This is a diamond in the rough,’ but this was really daunting and seemed almost beyond redemption. So down at the heels.”

Now, with a lot of walls and concrete stripped down and some “beautiful, monumental steel” coming out, Himmelstein is “really excited about where the building is going.”

But the showrooms in the CMC building are now in the minority, overall. From the time Brookfield became interested in the property about six years ago, or a few years before its investment was public, the company’s eyes were on mixed use and offering large amounts of “creative office space” in the rapidly improving downtown L.A. real estate market. A draw for major companies in technology and entertainment. In the building with the showrooms, four of the floors are set for office tenants and event space. The other two buildings are basically all office space and all three will have ground level retail and restaurants.

Brookfield is confident there will be plenty of demand for its soon-to-be large offering. A recent report from L.A. Fashion District said over the next 20 years, downtown is expected to see an increase of 125,000 residents and 55,000 new jobs, citing an unreleased report from the Los Angeles Department of City Planning. Over the last five years, a handful of theaters and boutique hotels have opened up and more are coming. There are now more than 800 restaurants and already 40,000 residential units have opened, a number expected to double in the next few years. That’s an increase from less than 1,000 residential units a decade ago.

Brookfield hasn’t signed any retail or office leases yet, but for the former, talks are well under way. Talks for office space are also happening, but the whole project isn’t set to be complete until the third quarter of 2021 (it was originally slated for 2020, according to earlier reports). Foley has had talks with some bigger companies, but nothing’s official. He’s expecting a major company or two to come in and take a substantial amount of the office space and the design is such that layouts and even lobbies can be changed if a tenant wishes.

“Leasing is never done the day you open, but very likely we’ll get someone who wants to plant their flag in downtown L.A., potentially even take a whole building,” Foley added. “Having 100,000 square feet a floor is almost nonexistent.”