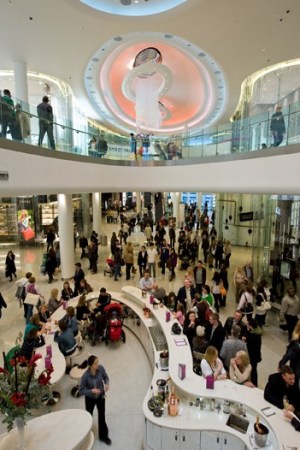 MILAN — Declining output, rising unemployment and a lack of cheap debt have made for a difficult year for the commercial realty market in Europe, and with the economy set to contract 4 percent in 2009, more pain is anticipated over the next 12 to 18 months.

Retail property capital values fell by a fifth in Europe last year and are set for further declines, according to real estate services firm Jones Lang LaSalle. Occupancy levels are down, particularly at secondary and tertiary retail locations and development is slowing. Realty advisers Cushman & Wakefield reported last month that up to 75 million square feet of planned shopping center development in Europe has been put on hold or canceled as a result of the credit crunch, including in emerging markets like Russia, Ukraine and Turkey. (The firm forecast 107 million square feet of new mall space would be built across the region in 2009 and another 75 million square feet in 2010. Next year would represent the slowest rate of expansion since 2005 and bring to an end five consecutive years of growth in shopping center development.)

“Times are tough,” said Radice. “The pain has to be shared.”

But all is not doom and gloom.

Prime retail locations are so far proving resilient to the downturn due to high demand from luxury labels, which continue to clamor for doors on the most prestigious streets, despite declining profitability.

For example, so far this year, Lanvin has opened on London’s fashionable Mount Street, where spaces are said to rent for 200 to 265 pounds, or $290 to $390, a square foot. Marc by Marc Jacobs and Rick Owens opened boutiques around the corner on South Audley Street, Prada launched its second unit in Madrid on the Calle Serrano, Paul Smith opened his first women’s-only Paris boutique on Rue de Grenelle and Cartier opened a store in the 15th-century Palazzo Corsi-Tornabuoni in Florence.

Meanwhile, Belstaff is set to open units in Prague, Bucharest, and Barcelona over the next four months, and clothing retailer C&A said in April it plans to expand its retail network in Europe, after reporting a rise in full-year sales and market share.

Scott Malkin, chairman of Value Retail, which operates Chic Outlet Shopping in Europe, said there has been a dramatic uptick in demand for space at the group’s nine sites across the region.

“Our outlets are key retail streets….We serve a purpose that cannot be served elsewhere,” Malkin said of the shopping villages, which are an hour’s drive from London, Paris, Madrid, Barcelona, Milan-Bologna, Brussels-Antwerp-Cologne, Frankfurt, Munich and Dublin. “[Brands] that were focused on emerging markets are coming to us to help drive the performance of their current business.” Malkin cited double-digit year-to-date increases in foot traffic, gross sales and same-store sales per square foot overall in Europe.

By location, like-for-like sales were up by single digits at Laz Rozas Village near Madrid and La Roca Village near Barcelona and flat at Kildare Village near Dublin, which was “incredible” compared with 40 to 50 percent drops at department stores in Spain and Ireland, Malkin said. Meanwhile, comparable sales were up by double digits in Italy; Germany; Benelux, France, and the U.K.

After luxury firms, Mark Burlton, who heads up Cushman & Wakefield’s cross border retail business in Europe, said discount players were by far the most active tenants in the region, citing TK Maxx — which operates in the U.K., Ireland and Germany and is part of U.S.-based TJX — and Primark as examples of companies that could take advantage of the economic situation.

By country, experts said the U.K. realty market had been hit hardest and fastest by the economic crisis, with capital values down more than 40 percent from their peak in June 2007 and yields down to around 4.5 to 5 percent from around 7 to 8 percent.

Compounding matters, economic output shrank by 1.9 percent in the first quarter relative to the fourth quarter of 2008, hitting occupancy levels. The average availability rate on top streets in the U.K. was 11.2 percent in February compared with 6 to 7 percent in previous years, following bankruptcies over the Christmas period, which added another 850 spaces to the market, Cushman & Wakefield said.

John Strachan, head of global retail at Cushman & Wakefield, said tourists flocking to London to capitalize on the weak pound had supported tenancy levels in the West End, but streets that depend on locals for trade, such as Chelsea’s King Road, were performing less well.

However, the picture worsened outside the capital, according to Michael Gutman, managing director of Westfield Shoppingtowns Ltd., which operates the Westfield London shopping mall.

Gutman said the 1.7 billion pound, or $2.5 billion, Westfield London Mall — the largest urban shopping centre in Europe — which opened in the fall, did so at “a very difficult time…but with almost 12 million people visiting the mall in the last six months, we’re well on target.”

Strachan said the majority of retail developments in the U.K. had been shelved, except where work had already begun, as in Cardiff and Stratford. He added this would lead to “a big drop in available space in the future.”

Tim Bogan, head of international sales at real estate consultants Berlin Capital Investments, said the German realty market, particularly in Berlin, where rents are 20 to 30 percent lower than in London, was in better shape than the U.K. and would probably emerge from the crisis the most unscathed of any European country.

“Germans are safe with their money, so they haven’t had the problems of a subprime market,” Bogan said.

In its first quarter report, Jones Lang LaSalle’s Kemper German subsidiary, showed continued expansion in apparel retail tenancy in Germany in the first quarter of this year and forecast a solid rental market in prime locations in the second quarter, although there were signs of less interest in second-tier sites.

Bogan said smaller and cheaper units in poorer areas of Berlin like Neukölln, Kreuzberg and Reinickendorf, were standing empty, with shopping malls, such as the new Alexa near Alexanderplatz, reducing rents to attract tenants.

“If something’s empty, it’s either because the rent is too high or the quality of the space is not good enough,” Bogan said. “Good quality commercial space in the city center can still be rented out well.”

Cushman’s Burlton cited a similar picture in Milan. “There are some substandard opportunities, which will hang around for ages, and others, which will be pushed back a couple of years…but prime sites with waiting lists will remain prime.”

Kemper’s Jones Lang LaSalle said units of 1,100 square feet to 2,700 square feet remained the most sought-after size, but there was an increase in interest in smaller spaces under 1,100 square feet. So far this year, 880 new store openings have been announced in Germany, while large-scale developments, such as Berlin’s Humboldt Marina, which mixes residential, government and commercial space, are continuing.

“The smaller projects in the pipeline might be delayed, but the big, spectacular projects are all going ahead,” said Mangus Danneck, marketing manager of Kemper Jones Lang LaSalle.

In Berlin alone, there are 22 malls ranging from 19,300 square feet to 538,000 square feet for a total of 4.3 million square feet, currently on the drawing board. By 2012, the German capital could be studded with more than 60 shopping centers for a population of around 3.4 million people.

Danneck said the situation could be more difficult in mid- and small-size towns but said there was still strong interest in new urban mall developments in towns and small cities with a good central setup.

Looking ahead, experts said it was impossible to predict the timing of a recovery.

“Sooner or later, greed will replace fear again. It depends on the availability of cash and effectiveness of economic stimuli in place,” Burlton said. “My gut feel is that there will be a rally in the third quarter ahead of Christmas, then a retreat as people look to see the effect, and then a steady improvement in 2010…although next year will be weak generally.”

In the meantime, cash-rich investors are set to pounce on distressed opportunities.

“The stressed market will bring opportunities to buy assets that would not otherwise be available,” a spokesman for Grosvenor said.