Gone is the suburban shopping mall. At the Mapic retail real estate fair in Cannes, the spotlight was on urban developments with mixed uses.

A rendering of the Intu Costa del Sol project.

CANNES, France — The old adage that “if you build it, they will come” no longer holds true in the European real estate sector, as retail developers seek to develop a new blueprint for shopping centers in the age of e-commerce and climate change.

Gone is the suburban megamall. At the Mapic fair, which took place in Cannes, France, from Nov. 13 to 15, the spotlight instead was on urban developments with mixed uses: easy to reach using public transport, they combine shopping with offices, housing, hotels, restaurants, gyms, parks and leisure facilities for all ages.

“This is the way our job is changing: every single project has to make sense,” said Christophe Cuvillier, chief executive officer of Unibail-Rodamco-Westfield, which owns and operates 92 shopping centers worldwide. “It has to be at the right scale, which doesn’t mean it cannot be ambitious,” he told WWD.

With consumers less likely to drive, the group is focusing on projects that are connected to public transport. “We’re looking to that, and more and more creating city districts rather than monoliths. The permeability, and the fact that it’s part of a district, is more and more important,” Cuvillier said.

He cited as examples two of its upcoming projects: Westfield Hamburg-Überseequartier, which will be connected to the subway, a bus station and a cruise terminal, and Les Ateliers Gaîté near Montparnasse station in Paris, which will feature a food hall operated by local restaurant operator MoMA Group.

The group is in the process of converting many of its shopping centers to the Westfield banner following Unibail-Rodamco’s acquisition of the Australian shopping center operator last year for $24.7 billion. In parallel, it’s shaking up its tenant mix to include new shopping, dining and entertainment options.

It plans to roll out virtual reality experience The Void, which allows participants to feel like they are in a “Star Wars” movie, to a total of 26 locations in the U.S. and Europe over the next few years. In parallel, it is providing more space for so-called digitally native vertical brands, or pure players, such as Warby Parker and Bonobos. 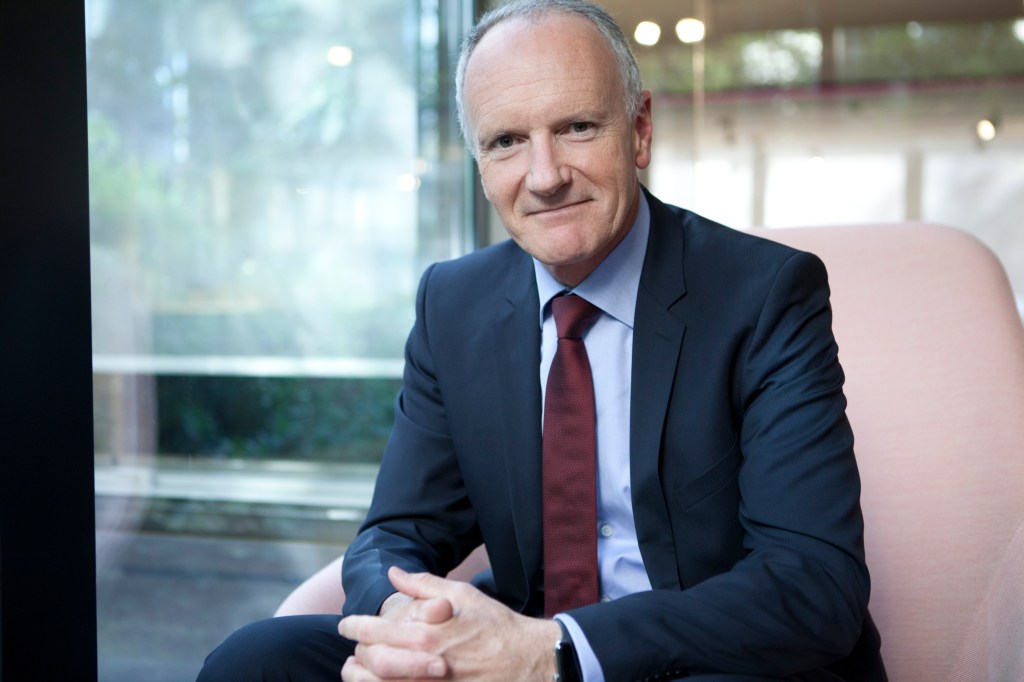 British property developer Hammerson, meanwhile, is exiting its out-of-town retail parks and refocusing its business on its city shopping centers and premium outlets division as it works to reduce its debt.

It has identified 100 acres of land adjacent to its existing malls, which it plans to redevelop as part of its City Quarters concept, said Iain Mitchell, U.K. commercial director at Hammerson. Plans include 6,600 residential units, 1,600 hotel rooms, up to 300,000 square meters of office space and nine public open spaces, he said.

Citing the growing rate of urbanization — the UN forecasts that the share of the world’s population living in urban areas will rise to 60 percent in 2030 from 55 percent in 2018 — Mitchell said younger generations were more likely to live in city centers.

“That’s where their expectations are obviously very different around having civic space, having local health-care facilities, having more leisure,” he said. “The City Quarters feeds into all of that. It’s responding to the change in the market and equally driving the real heart and soul back into the city centers.”

As department stores struggle to attract consumers, Hammerson aims to cut their share of gross leasable area to 28 percent from 39 percent over the next five years. Some of the space is being repurposed in unexpected ways: a cat café, Kitty Café, opened at its Grand Central center in Birmingham, England, in May.

Via Outlets is remodeling and upgrading its 11 premium outlet shopping centers to capitalize on the strong performance of the channel. The operator reported a 10 percent increase in brand sales and an 8 percent rise in footfall in the first half of the year.

“We are growing, we have healthy numbers. The online retail channel is a clear winner, but we’re the runner-up,” said Otto Ambagtsheer, ceo of Via Outlets. Given that most of its centers are a 30- to 40-minute drive from the city center, the group has to create a shopping destination worth traveling to, he argued. 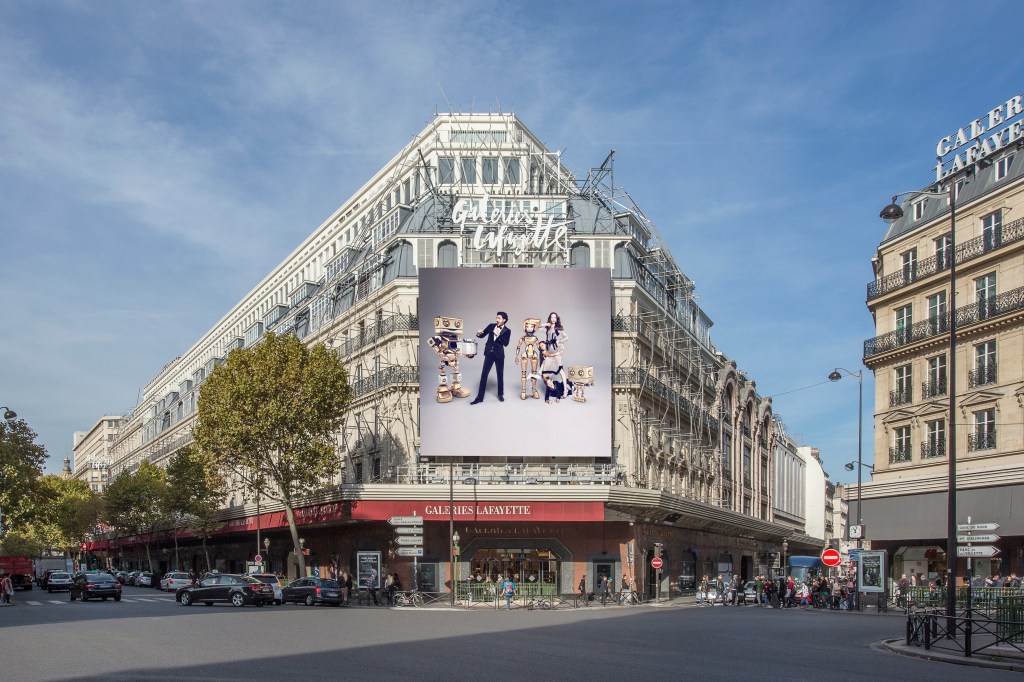 Eric Costa, ceo of Citynove, the real estate arm of Galeries Lafayette Group, said the French government’s decision earlier this month to abandon the EuropaCity project was a sign of the changing times.

The vast retail, culture and leisure complex in the northern suburbs of Paris had been awarded to Bjarke Ingels Group, the Danish architecture firm behind the Galeries Lafayette flagship on the Avenue des Champs-Élysées. It had met resistance both from environmental campaigners and existing retailers in the region.

“It’s good news, in a way. It’s sad for the teams who had worked hard to improve the project, but it was fundamentally flawed from the start,” Costa said. “It came to embody the public debate about overconsumption versus job creation, leisure versus the environment, and so forth.”

Costa described the mood at Mapic, where attendance was down 3.5 percent to 8,200 participants, as “studious,” noting there were fewer cocktails and festivities than in previous years. With everyone knuckling down to pull the retail sector out of its crisis, he suggested the way forward was building less.

“Our argument is that there is already so much poorly conceived, poorly executed, second-rate real estate out there, that the priority should be to transform what needs to be improved rather than build new structures,” he said.

As part of its scheduled renovations, Galeries Lafayette has launched a vast revamp of its Boulevard Haussmann flagship in Paris, including the restoration of its glass cupola, built in 1912. The project, to be completed in 2025, will also include a redesign of the basement and ground floors of the store.

“For years, the objective was to win more floor space, because more floor space meant more sales. Today, we don’t mind losing floor space if it means making the store more comfortable for our visitors. We’re convinced this will end up boosting sales per square meter, because the quality of the space will improve,” Costa said. 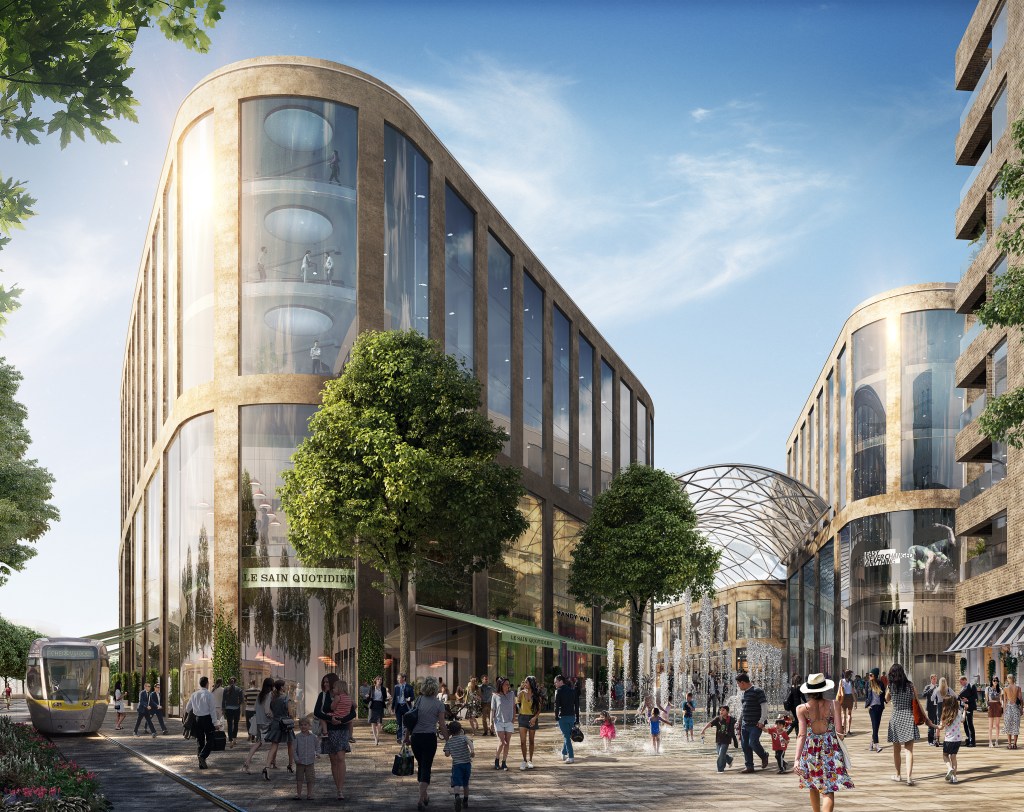 A rendering of the Cherrywood development in Ireland.  Courtesy

Derek Rossel, development director at Hines, said its Cherrywood project in South Dublin was a case in point. Built over 324 acres, the brand-new urban development will be located 35 minutes by rail from Dublin’s city center and is expected to draw 25,000 new residents.

The town center will be home to upward of 100 retail units, a 10-screen cinema, a rooftop bar, a medical center, a public library and a gym, designed to mesh with surrounding offices and homes.

“To be the best, you don’t need to be the biggest,” Rossel said. “So filling your malls with roller-coaster rides and waterslides and ski runs is not the future of retail. The future of retail is having a balanced mix of uses that are intelligently stitched together on the customer journey.”

In contrast with the neighboring U.K., Ireland is set to post the strongest growth in the European Union this year, with gross domestic product expected to rise 5.6 percent, according to the European Commission’s latest forecasts. As a result, he expects that Cherrywood will draw 14 million visitors per year.

“It’s the wealthiest catchment in that country. It’s underserved in terms of product — nothing’s been built for almost 20 years at scale,” Rossel said. “This notion that all retail is poor is completely incorrect. There are very successful fashion brands out there and we are partnering with the most successful.”

Ian Sandford, ceo of Eurofund, which is partnering with British real estate investment trust Intu on its Costa del Sol project in Spain, billed the ground-up development as Europe’s first global resort, with facilities including a 5,000-person concert venue, a surf park, a 4,000-square-meter theater and two hotels.

While the 700-million-euro resort may strike some as bombastic, Sandford — who is spearheading the project — argued that it was filling a gap in city planning, pointing out that the development would include 260,000 square meters of green area, including Spain’s largest urban farm.

“Governments can’t afford to build any more the big urban parks which we have in cities. As cities grow, the place where people had traditionally gone to breathe, governments can’t provide those,” he said. “We as a private sector can do that, and that’s what we’re creating: places where people want to come and spend their time.”

With the emphasis on experiences, he has appointed WATG, an architectural firm specialized in hotels, to work on the design of the resort. “They’ve never worked on a shopping center before, which I see as a tremendous advantage,” Sandford said.

“We’re going from transactional to emotional. We’re going from having things to doing things,” he added. “We will be welcoming 29 million guests into our resort who’ve chosen to spend their time with us. We have therefore got to be in the hospitality business and look after them and give them a great time.”

But Sandford believes that no matter what the scale, developers need to rationalize their ambitions.

“It’s absolutely right that we should be justifying why we’re doing this, how we’re doing this. As investors, we are still fathers with children out there, and I want to leave a better world for my kids. Whatever we can do to contribute to that, we should be doing,” he said.