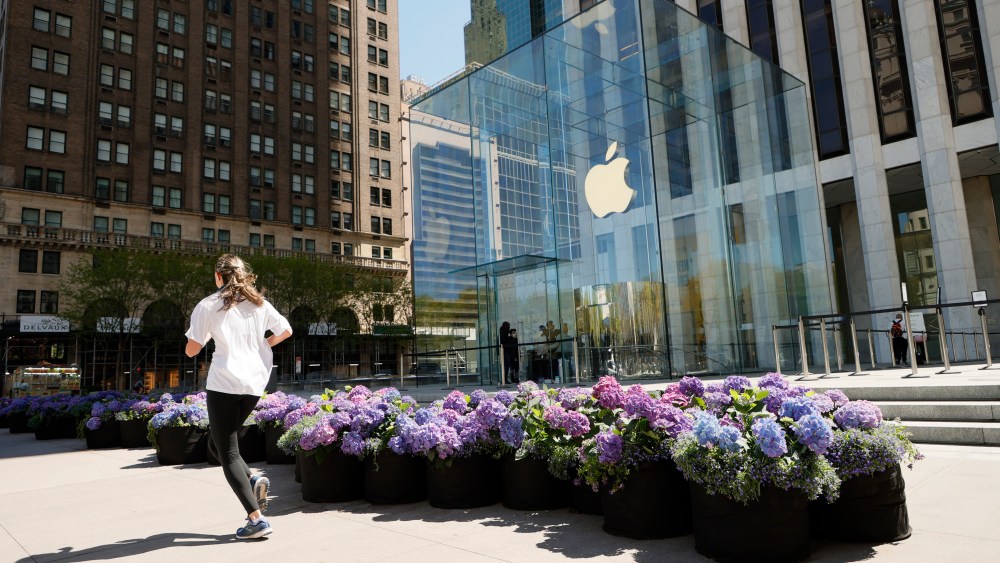 Fifth Avenue is blooming, not yet with a normal, pre-pandemic level of tourists and shoppers, but with a flower show exhibiting a preponderance of pink and purple hydrangea, geraniums and calibrachoa, among 14 varieties.

The flower show stretches from 47th to 59th Streets (primarily on the east side of Fifth) and is a reflection of new programming by the Fifth Avenue Association Business Improvement District, which extends from 46th to 61st Streets, to energize the avenue. The flower show, launched Saturday, celebrates Mother’s Day, which is Sunday, and runs until May 14.

“We’ve heard from landlords and stores that they want new activities to drive traffic,” said Jerome Barth, president of the Fifth Avenue Association. “It’s about bringing optimism, and making Fifth Avenue very cheerful and approachable,” in what has otherwise been rather gloomy times for business due to COVID-19.

For impact and an outpouring of color, the flowers are tightly massed in large clusters of fabric grow bags. There are 100 of them placed on 59th Street by The Apple Store, and 40 or more depending on the block. Each grow bag is filled with 20 to 40 gallons of soil. Even with the profusion of flowers, given the 21-foot average width of Fifth Avenue Midtown blocks, there’s plenty of walking room for pedestrians.

The BID’s strategic vision focuses on “New York first,” said Barth, meaning programming will be focused on engaging with local talents as well as the retailers along the avenue to present exhibits, performances and other experiences to draw attention and traffic to Fifth. A New York-based floral designer, Sachiko Rose Pollard, also known as Sachi Rose, created the Fifth Avenue flower show.

“For the fall, we are working on something significant,” said Barth, without specifying what that programming could involve. He said the BID is exploring the possibility of the city closing Fifth Avenue to vehicular traffic for “quality activations” on possibly four weekends, in the Thanksgiving to New Year’s period. That’s when visits to Fifth Avenue peak. “The goal is to punctuate the year with quality activation that keeps Fifth Avenue top of mind,” Barth said, noting that the BID is operating on a $6.4 million budget.

Currently, “high-end jewelry is doing very well, and other businesses are showing improvement,” Barth said, when asked about the state of business along the avenue.

While retailing is choppy, there are several projects happening and big changes coming to Fifth Avenue. Mango is subleasing the former Ralph Lauren store and will open later this year; three restaurants are planned for the Aman luxury hotel and residences in the Crown Building; Saks Fifth Avenue recently added a café; Rockefeller Center has been renovating and changing storefronts, and Lego is renovating its flagship there and has temporary space onto Fifth.

Mikimoto just doubled its space with a refreshed look; Minamoto Kitchoan for artisanal Japanese desserts and wagashi is opening at an unspecified date in the Childs Building at 604 Fifth, which it bought; Tiffany, temporarily on 57th Street, is renovating its Fifth Avenue flagship and will reopen late 2021 or early 2022; Chopard is relocating its flagship from Madison to Fifth late this year or early next year, and Harry Winston is expanding into the former Henri Bendel town house at 712 Fifth Avenue next to its original space at 718 Fifth and has temporary quarters on Fifth.

“People think there will be a strong recovery” along the avenue, said Barth, explaining the activity.

While Mango is reportedly paying a fraction of the rent that Ralph Lauren was paying, Barth rejected the idea of a pattern of declining rent rates along Fifth in Midtown. “Every single lease is a one-of-a kind,” he said.

On Saturday, there was decent pedestrian traffic on Fifth, no doubt some drawn to see the flowers. Yet in years past, a sunny spring day would normally bring many more visitors. Flower power is also evident at Macy’s Herald Square, which relaunched its popular annual flower show Sunday, after COVID-19 forced its cancellation last year.

On Fifth, a total of about 8,000 flowers are displayed. “It’s a mix of perennials and annuals,” said Sachi Rose. “It’s really about color and seasonality and choosing what kinds of flowers can last on the streets of New York.”

The grow bags are “massed” up against each other to create “big, surprising pops of color,” said Rose, who works with cut flowers for destination weddings and other events. The color scheme changes, often correlating with the retail architecture. By the gold-leafed Scribner Building, for example, the flowers are predominantly orange and golden. By Apple, the color palette is blue-ish, to coordinate with the Apple cube.

There are no signs telling people not to pick the flowers, but Rose said two ladies were caught on video lying in the flowers and taking selfies. “We watched them in the security cameras. My first reaction was anger because we had worked so hard and had to replace it all at 5 a.m. That kind of entitled behavior is unacceptable. If I ever find those pictures of them on Instagram I’d like to have them come and work for me and get their hands dirty and instill some humility. In the end, what can you do? We shrugged it off and kept planting.”