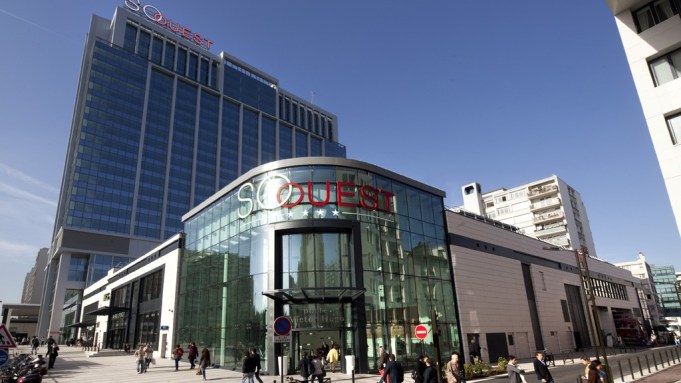 PARIS — French shopping malls are undergoing a sea change, as developers, faced with the competition of e-commerce, dream up new ways of luring customers to physical stores.

The latest of this new generation of shopping centers is So Ouest, a 570,500-square-foot mall on the western outskirts of Paris that features 102 stores, 10 restaurants and a 165,000-square-foot E. Leclerc hypermarket, with an eight-screen multiplex to follow by the end of 2014.

In the month after the mall’s opening in mid-October, it attracted one million visitors and hopes to hit the 10 million mark in the first year. Unibail-Rodamco, which invested 350 million euros, or $453.8 million at current exchange rates, in the venture, has awarded the mall its “four-star” label — a certification based on 571 quality control factors.

Nelly Païs, manager of So Ouest, said the two-story mall, which features glass atriums flooded with natural light, was designed to resemble a Paris apartment. “The concept is chic and urban,” she said. “We selected rich materials to create made-to-measure fittings, materials that people are not used to seeing in a setting with that amount of foot traffic — leather, marble, polished stone and wood paneling.”

Innovative features are designed to appeal to the five senses — from scent diffusers to automatic pianos playing classical music, or a gallery of portraits by the escalators that mixes static reproductions of famous paintings with moving digital portraits of models dressed in 18th-century costume, who blink unexpectedly at passersby.

The center is home to the first stores in France for toy maker Lego and Italian ready-to-wear brands Antony Morato and Original Marines. It also features a Hollister store with a fully digital window display, and the biggest Marks & Spencer store in continental Europe, with a surface of 75,000 square feet.

Among the services the mall offers are a free bus shuttle to Paris, personal shoppers, shoe shiners, an interactive child-care space, a car and scooter valet and free Wi-Fi. Though the multichannel approach is still in its infancy in France, So Ouest has a mobile application, which can be downloaded for free on the iTunes App and Google Play stores.

“Nowadays, we have to highlight what differentiates physical shopping from shopping online,” said Païs. “The huge advantage of shopping centers is shared experience. People still don’t shop together on their computers, so it remains fairly impersonal. Advice from an experienced sales associate, a smile or directions from a hostess, these services — they are all things the customer is looking for.”

Jean-Michel Silberstein, managing director of the National Council of Shopping Centers of France (CNCC), said So Ouest was a prime example of the level of investment necessary in the digital age.

The latest figures from France reveal that the Internet is grabbing an increasingly important share of the market. While overall French clothing sales fell 5.5 percent between July 2011 and June 2012, online purchases of ready-to-wear rose 18 percent during the period, according to a study from the French Fashion Institute, or IFM.

“It is harder to attract visitors than it was a few years ago,” said Silberstein. “[At So Ouest] a lot of money has been invested in making customers feel comfortable. I think this is a tendency we are going to see in future, that is to say, investments in interior design and organization will be greater than they were in the past.”

He predicted this would not necessarily result in higher rents for retailers. “When you build a mall like that, the idea is not to cash in right away, but to create an engine that is going to run for decades. Therefore developers, and in particular French developers, do not go for heavy rents from the beginning, far from it. They prefer to put the accent on the quality of retailers on site,” Silberstein said.

Among the most eagerly awaited developments in the pipeline is British real estate firm Hammerson’s seafront Les Terrasses du Port mall in the southern French city of Marseille, slated to open in the first half of 2014. Its 657,000 square feet of retail space will feature the first new Printemps department store since 1982 and an Apple store.

Vincent Ravat, director of operations at Hammerson France, said the developer is improving all its existing properties and tailoring new developments with the digital consumer in mind. “This is a type of consumer who is used to abundance, and also used to permanent renewal, so they are both more demanding and less loyal,” he said.

He noted, however, that even as consumers now have the world at their fingertips, they are increasingly craving simple, local values instead of cookie-cutter formats that don’t necessarily reflect their needs.

“We must offer consumers a link to their local roots and identity in terms of how the space is conceived,” said Ravat. “We must streamline retail for them and simplify their lives, but at the same time, open up new horizons and bring them the ‘joie de vivre’ they don’t necessarily have in their everyday lives.”

He said Les Terrasses du Port would provide Marseille, a historic port town, with a seafront leisure complex it was so far lacking. Its food hall will host nationwide chains, alongside local merchants offering regional specialties, which customers will be able to enjoy on a panoramic terrace facing the ocean.

“The most important thing, in fact, is to succeed in developing knowledge of your market and the location and customers’ expectations, which are permanently evolving, in order to deliver something quite simple, but which matches their particular needs — and that is the most difficult thing,” Ravat said.

Retailers must not only come up with tailored concepts, but are also under pressure to develop the multichannel approach — both of which require increasingly detailed customer data, capable of rivaling the wealth of information collected online by pure players. For example, new instruments will allow mall operators to measure the flow of traffic not only in and out of a center but also within the mall itself, said the CNCC’s Silberstein.

A recent study titled “E-commerce and multichannel strategy” by management and technology consultants Bearing Point, commissioned by the CNCC, points out one out of three people in France now owns a smartphone and 76 percent of French consumers have used social media when planning a purchase.

It suggests, among other measures, that retailers present in the same mall who offer online sales consider pooling some related services, such as payment infrastructures, collection points for online purchases or after-sales service.

Silberstein noted that although many French consumers were not yet ready to jump across the digital divide, this will likely change — along with the face of the country’s shopping malls.

“The evolution will be gradual. Going forward, it is likely that a significant portion of stores will transition to a showroom-style presentation where consumers will be able to experience and find out about products, without those products necessarily being stored on site,” he said.