Friday's speakers urged Mayor Bill de Blasio’s administration to not remove any of the zoning protection until a significant core amount of space is secured for manufacturing in Manhattan. 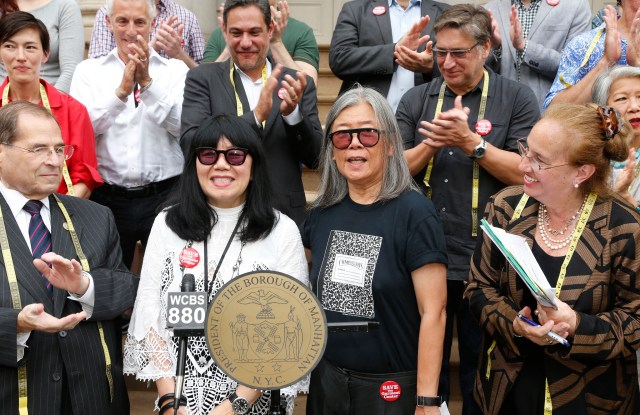 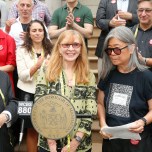 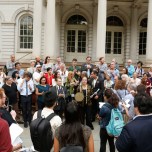 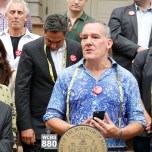 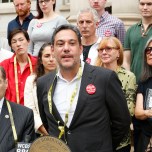 Bucking that adage, about 50 manufacturers, designers, union members and officials turned up on the steps of City Hall Friday afternoon to plead their case for saving the Garment Center.

Organized by Manhattan Borough President Gale Brewer, the gathering was to release the Garment District Steering Committee’s final report and recommendations. Anna Sui, Yeohlee Teng, Nicole Miller, Carlos Campos and other attendees appeared to be making a preemptive strike in advance of a Planning Commission meeting scheduled for Monday. But city officials scrubbed the zoning topic from Monday’s meeting and steering committee members said they were notified of the change late Friday.

During the event, several of the speakers stressed that the fashion industry employs 180,000 people with more than 900 companies based in the city. They repeatedly urged Mayor Bill de Blasio’s administration to not remove any of the zoning protection until a significant core amount of space is secured for manufacturing in Manhattan.

New York Congressman Jerry Nadler said, “The garment center will live or die based on real estate guarantees. I don’t care what the administration or anyone else says, everything else is secondary. If there is no guarantee for zoning, or a purchase to keep the space, the space will go to people who will pay more money. And manufacturing pays less money than certain other uses. We will lose the entire garment industry. There is no question about that.”

Teng said, “The city counts New York as the fashion capital of the world. However, you have to realize that this status and privilege stands fully on the shoulders of the garment workers. The plan now is to move forward with the lifting of the zoning without provisions for the industry.…I call upon the mayor to make the right choice for all of us in the industry.”

Expecting city officials to start the process of lifting the Garment Center’s decades-old zoning, attendees are calling for officials to commit to a phase-in provision that would secure a designated amount of space for garment manufacturing through purchases or long-term leases. At stake is 1.4 million square feet of prime Midtown real estate. The Brewer-led coalition is jockeying for 500,000 to 750,000 square feet in the neighborhood, as opposed to de Blasio’s proposal to create a $136 million “Made in New York” campus at Bush Terminal in Brooklyn’s Sunset Park.

But city officials seem to be reconsidering their initial plan. A New York City Economic Development Corporation spokeswoman said late this afternoon, “We have received the report released by the Manhattan Borough President’s office and look forward to a more thorough review of its recommendations. It became clear to us during the process of developing the recommendations that some were supported by all stakeholders while others were not. We’ll review the report and determine which recommendations are good policy and whether others can be adapted to support garment manufacturing and help grow good jobs for New Yorkers. We look forward to moving ahead with the formal review process to update the 30-year-old zoning in the Garment Center in the months ahead.”

Miller noted the value of having such concentrated access to all element of fashion production in Midtown and contended that is something that could not be easily duplicated. To humanize another American-made label, Nanette Lepore’s director of manufacturing Michelle Jonason brought Edward Wang, one of the owners of the 13 factories that the company works with. And Sui said, “My whole career has been in the Garment Center. I have probably been in every building for a contractor, for a sewing factory or a trim place or a fabric place. You have everything at your fingertips. People to make button holes or to do pleating. If that area is broken up, I don’t think we can really survive transferring to a distant place. There are workers who live in New Jersey and Connecticut. The commute for them would be very, very difficult.”

With 40 employees of her own and dependent on three contractors with similar-sized employee bases, Sui said she wasn’t certain people would follow her should she relocate production. In addition, “These are skilled workers. People are overlooking the importance of that craftsmanship.”

Steven Epstein, a member of both the GCSC and IATSE Local 764, the Theatrical Wardrobe Union, told attendees that Broadway costume designers, as well as ones from “Saturday Night Live” and other shows count on Garment Center businesses for their respective costume needs.

City officials are said to be eager to fast-track lifting the zoning, though — in addition to the Planning Commission’s approval — such changes would require the City Council’s approval, which could take months if not longer. Perhaps as an indication of the increasingly heated debate, a spokesman for Garment Center District president Barbara Blair, e-mailed a lengthy rebuttal 90 minutes before Friday’s press event started. She said the Steering Committee had not acknowledged such factors as global competition, designers’ business decisions to not source locally, the “indisputable fact” that apparel manufacturing jobs have declined for more than 50 years and the diverse set of non-fashion businesses in the neighborhood among them.

“Zoning may be about preserving space, but it is not about saving jobs. Both the EDC and the Steering Committee invited property owners and the GDA into the process and encouraged their support and participation, by ensuring that the removal of the zoning restrictions was an objective. The report should reflect that this was a stated goal.” Blair said.

Conversely, the GCSC’s 16-page report listed 11 recommendations including creating a NYCIDA program to retain long-term garment production, lining up a public-private building purchase for dedicated Midtown production, setting up hotel restrictions and supporting nonprofits to secure a core of garment manufacturing in the neighborhood. “We cannot get rid of the current zoning restrictions until we are sure enough space is preserved for the manufacturers who need to stay in Manhattan,” Brewer said, singling out the need for an IDA or for the administration to write in the GCSC’s phase-in proposal to the zoning text.

Claiming to be open to other ideas, Brewer said the aim is to create a healthy hub for Midtown manufacturing while also supporting production in other boroughs such as Brooklyn. Acknowledging how real estate pressures are threatening Manhattan manufacturing, she cited illegal conversions and manufacturers on month-to-month leases as examples. In some cases, factories are reliant on workers with 20-plus years of experience with specific skills — some of whom live in Queens and would not agree to taking two to three subway rides required for a Brooklyn commute. “We need the fashion industry to continue with its ecosystem…sewers, markers, cutters, button workers, suppliers and more,” Brewer said.

Reached for comment after the City Hall event, Steven Kolb, president and chief executive officer of the CFDA, said, “CFDA’s focus continues to be the Fashion Manufacturing Initiative. To date, FMI has awarded $2.3 million to 22 New York factories through 27 individual grants. Of those, 15 were located in Midtown Manhattan. The application for the next round of grants is open until Aug. 31.

“As a member of the working group, we support the group’s recommendation, but as an organization, we have no opinion on zoning and are focused on supporting factories through FMI throughout the city, and look forward to expanding the ecosystem to Sunset Park. We believe Midtown remains important and will continue to support it through FMI and other programs.” Kolb added.