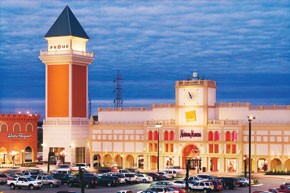 With the weak U.S. economy stifling consumer spending, better and contemporary brands and designer labels, as well as retailers, sense an opportunity to step up their outlet strategy. That means more locations and elevated offerings, and a decor that doesn’t diminish the haute image.

“There’s definitely a trend there,” said Karen Fluharty, senior vice president of marketing for the Baltimore-based Prime Retail. The company operates 21 outlet centers in the U.S. that average 250,000 square feet and comprise a total of 10 million square feet, and even has a celebrity stylist, Mark-Alan Harmon, from the the Style Network, making appearances at its outlets.

“The aspirational shopper that we are speaking to is looking to maximize their dollar, while the superluxe customer will always have a full-price affinity,” Fluharty said.

The nation’s three biggest outlet operators — Chelsea Property Group, Prime Retail and Tanger — are all vying to broaden their portfolios of aspirational and luxury brands, and are touting property expansions and renovations as the hook.

For the moment, there seems to be enough to go around. Whether it’s Coach, Saks Off 5th, Kate Spade or Juicy Couture, many brands that play in the upscale arena are increasingly eager to cater to a consumer base they might not have seriously tapped before. To a lesser degree, they are also working to sell to those luxury shoppers, pinched by the shaky stock market and other economic pressures, who might be bypassing traditional malls in favor of outlets to satisfy their couture cravings.

“Outlets have become more of a distribution channel than just a sell-off channel,” said Stephen I. Sadove, chairman and chief executive officer of Saks Fifth Avenue. “Brands are seeing that the customer is different. There isn’t as much overlap as once thought.”

This week, Saks ups the ante by launching a prototype 24,400-square-foot Off 5th outlet in Prime Outlets International Center in Orlando, Fla. Much as retailers often launch a regular-price store, the new Off 5th will host a private preview for its most loyal customers on Wednesday. Starting on Friday, and through the weekend, special events, savings passes, gifts with purchase and a chance to win a $1,000 shopping spree are being offered. Executives described the store as streamlined, exhibiting “the modern feel of luxury in a loft environment.”

Robert Wallstrom, president of the 48-unit Off 5th chain, said, “Over time, we believe there is meaningful new store growth opportunity for Off 5th and we look forward to expanding this new format into other markets.”

“We are in a brand-building mode,” he said, involving both full-price and outlet businesses. “We are opening full-price stores, but the outlet business is a very profitable one. It’s a completely different customer. We provide different products that are more affordable.”

About half the goods at a Tahari outlet are clearance, the other half are expressly made for the outlet environment, Tahari said. He operates a dozen regular-priced stores and about a half-dozen outlets.

Even in the worsening economy, companies are not immune from shareholder pressures to grow. Most have already planted full-priced flagships along America’s most venerated retail venues, whether it’s Fifth and Madison Avenues in New York or Rodeo Drive in Beverly Hills. They see few remaining pockets of wealth where there is an appetite for luxury left to tap. Consequently, alternative revenue-generating strategies, including pursuing the outlet sector, are being devised. However, they must be conceived in a way that preserves the integrity and aura of the brand.

To help document the trend, Prime Retail provided WWD with a spreadsheet identifying designer outlet openings at its properties. Among those that appear to be the most aggressive, Kate Spade slated five outlet openings this year, including two units that are already operating. Lucky Brand Jeans opened three outlets and has a fourth scheduled. Neiman Marcus Last Call has two units planned for 2009.

Puma is rolling out four outlets this year at Prime Retail properties. Since fall 2006, Juicy Couture has opened four outlets, with the latest on April 1 and another scheduled for November.

Fluharty said Prime Retail has 400 better and designer brands in its portfolio, with many replacing space that was once occupied by “fillers” or more moderate brands such as London Fog, Etienne Aigner, Hanes, Vanity Fair, Royal Doulton, Casual Corner, Danskin and House of Hatten.

“Certainly, the trend has accelerated over the past years; there has been a new wave of designers joining us,” she said, citing Roberto Cavalli, Missoni, True Religion and Oscar de la Renta, among others. “There are many more high-quality brands we can put in our centers on Day One.” With that in mind, “We build a phase one [of an outlet center] with over 400,000 square feet and over 100 stores.”

“Having a value component,” she added, “is a good message in these times.”

Chelsea, which was acquired by Simon Property Group Inc. for about $5 billion in October 2004, posted sales of $504 a square foot last year. The company owns 56 outlet centers, including 38 in its Premium Outlet group, with a total of 18.8 million square feet of gross leasable area. The company’s holdings cover 27 states, Japan, South Korea and Mexico.

Next month, Brunello Cucinelli, Thomas Pink and Giuseppe Zanotti Design are opening in Woodbury. And in June, Chloé joins the crowd.

In a different twist, Helmut Lang is staging a sale at Woodbury from May to August, in effect creating a pop-up store that could be a prelude to a possible permanent outlet. Last year, Judith Ripka did the same thing at Woodbury, and a few weeks ago opened an outlet there.

At another Chelsea property, the Las Vegas Premium Outlets, Anne Fontaine will open in May, Ted Baker is launching this month, and M Missoni follows in July.

Chelsea’s seventh center in Japan is opening this year with additional international centers in development. The company also operates an outlet center in Seoul, and one in Mexico. Recent expansions were completed at Las Vegas Premium Outlets, Rio Grande Valley Premium Outlets in Mercedes, Tex., and Philadelphia Premium Outlets in Limerick, Pa.

Prime Retail’s 2008 development plans include large expansions and renovations, ranging from 115,000 square feet to 250,000 square feet at centers in Orlando; Barceloneta, Puerto Rico; Williamsburg, Va., and St. Augustine, Fla. Prime is adding 1.5 million square feet through 2010, much of which is expected to be tenanted by upscale brands.

For designers that previously distributed excess inventory to off-pricers or warehouse stores, operating their own outlets, as Rothstein explained, represents “a way to control excess inventory, and control how it is presented and sold. The designers are building out their outlets. Their employees run the stores and they control the pricing. They are exposing the brand to customers they may not have reached before.

“But this isn’t a revolution,” she said. “We’ve been very consistent and focused on that niche, cultivating it for the past 20 years. Maybe for others it is.”

Rothstein believes Gucci, some 20 years ago, was the first designer brand to enter the outlet business, at Woodbury. Others that followed closely were Versace, Tod’s and Escada, she noted.

“Better brands want to control their image at all of their outlets of distribution,” Fluharty said.

Over the past decade, it has become acceptable to situate outlets closer to metropolitan areas and regular-priced malls.

“The rule was, keep the outlets 60 to 70 miles away from the regular price stores, but it’s shifted to 45 miles now, and sometimes less,” Fluharty observed.

Prime is also constructing outlet properties with a greater emphasis on aesthetics. There are architectural details such as columns and efforts to make the layouts easier to navigate. The offerings are more organized, with luxury brands clustered around anchors such as a Neiman Marcus Last Call, and athletic brands situated together and moderate-to-better brands in their own area.

“Historically, when the economy is in a recession, outlets have a tendency to perform well,” Fluharty said. “But without successful full-price retail operations, the outlet channel for any brand is not going to do well. The two live in harmony.”