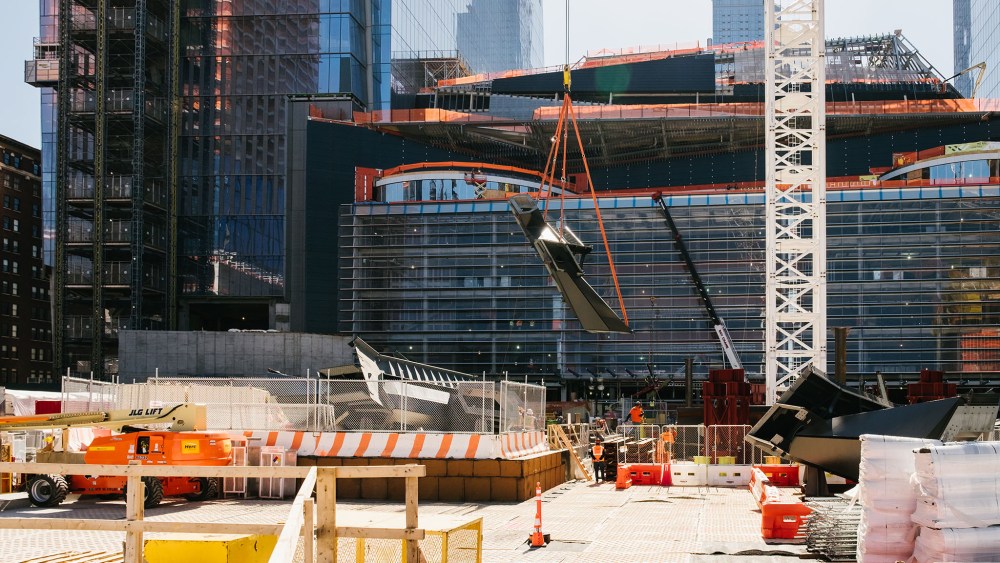 Construction on the Vessel, the 150-foot tall centerpiece of Hudson Yards, began Tuesday, marking another step forward in the development of the massive mixed-use project on Manhattan’s West Side.

Vessel is being installed in the center of Hudson Yards, within what will be a five-acre landscaped plaza known as the Public Square and Gardens. Vessel will rest in front of the shops and restaurants mall component of the developments, which has also begun to take shape and will house Neiman Marcus and 100 other shops as well as several restaurants.

Just south of the Vessel site is The Shed also under construction and with its skeletal framework now visible. Hudson Yards, the nation’s largest private real estate development, is also including office buildings for dozens of corporations including Coach and L’Oréal USA, residential apartments, a public school and an Equinox luxury hotel, and is built upon giant concrete platforms above the train yards.

“What a beautiful day. It makes you feel that your dreams can come true,” said Stephen M. Ross, chairman of Related Companies, which is developing the project along with Oxford Properties Group, just as a 100,000-pound piece of Vessel swung across the plaza and was rested in place by one of the several towering cranes on the construction site.

Ross, the visionary behind Hudson Yards, said the completed Vessel will be 15 stories or 150 feet high, “interactive,” and comprised of 154 interconnecting flights of stairs, 2,500 steps and 80 landings. Designed by Thomas Heatherwick, Vessel will be composed of 75 steel pieces, each weighing about 100,000 pounds and shipped by sea from Italy where they are being fabricated by Cimolai SpA in Monfalcone. Ten pieces are currently on the site. The sculpture will be clad in copper-colored polished stainless steel.

Vessel will rise from a base that is 50 feet in diameter and will widen to 150 feet at the top, offering a one-mile vertical climbing experience and affording great views of the west side and across the Hudson River. It’s expected to be complete at the end of this year, with the entire Public Square and Gardens expected to be done in fall 2018.

“This won’t be a static piece of art,” Ross said. “We’ll have races to the top.”

Part of the excitement of the project, Ross said, is that the public will be able to view it from the High Line and from Hudson Park and Boulevard at West 34th Street, in its various stages of construction.

While beyond enthusiastic about the installation, there is one aspect of Vessel that Ross doesn’t like: its name. He said a contest where all New Yorkers can participate will be held online to come up with a more suitable name, something that better reflects New York.

“It’s one of the most complex and ambitious pieces of steelwork ever made,” said Heatherwick, who wasn’t at the ceremony but issued a statement.

“There are so many buildings and projects I wish I saw being made,” Heatherwick said. “So for those who are interested, I hope it will turn out to have been worth heading up onto the High Line to catch a glimpse of the complex geometry being pieced together like an incredible jigsaw puzzle.”