As they head to the International Council of Shopping Centers’ ReCon conference, taking place next week in Las Vegas, mall and city street landlords are figuring out ways to reuse space and entice shoppers with entertaining experiences while remaining profitable. 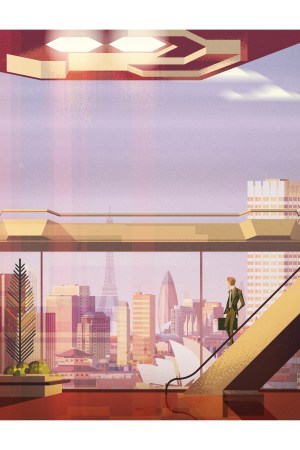 In an unsettling election year, political uncertainty is beginning to cast a chill over the economy. The clouds are gathering just as ReCon, the massive convention for the retail, real estate and shopping center industries is set to begin on May 23. Attendance is up by 1,000 to 36,000 — the highest level in recent years. But depending on how retailers view consumers’ proclivity for spending and how they assess real estate costs, there could be two days of frenzied deal-making or a much more tempered event. Consumer spending has been hampered by paltry wage growth — 0.1 percent in February, followed by 0.2 percent in March. Store closures are on pace to exceed last year’s figure, with retailers including Sears, Kmart, Sports Authority, Chico’s, Finish Line, American Eagle Outfitters and Aéropostale closing more than 600 stores.

A new report by Green Street Advisors recommends that department stores close 20 percent of all U.S. locations in order to return to 2006 pre-recession levels of productivity.

“If centers start getting giant blocks of anchor space back, there’s not a lot of players that can fill 50,000 square feet and above,” said Garrick Brown, vice president of retail research at Cushman & Wakefield.

The off-price sector remains in demand. Ross, T.J. Maxx and Marshall’s have been joined by Nordstrom Rack, Saks Off 5th, Macy’s Backstage, Kohl’s Off Aisle and Irish deep discounter Primark, which is expected to expand beyond the first eight stores it opened in the U.S. Rapidly growing dollar stores mint a new unit every 4.5 hours.

“The retail ecosystem is challenged,” said Mark Dufton, ceo of DJM Real Estate. “Retailers are closing stores quietly. Primarily, it’s driven by the fact that they’re fighting to reorganize outside of bankruptcy. Changes in bankruptcy laws and lenders with little patience to ride out a full bankruptcy have led retailers to go the liquidation route.”

While real estate investment trusts have been focused on building fortress shopping centers to make an end-run around e-commerce and keep competitive malls at bay, some owners would rather open the doors than build moats around their properties.

“Shopping centers seem to be moving toward a paradigm shift,” said Claude Sirois, president of Ivanhoé Cambridge Retail. “We used to build buildings filled with products that consumers would buy. Now, we’re all moving toward becoming a collection of experiences.”

Millennials are fueling the shift. “We can’t afford to get social media experiences wrong with that group,” Sirois said. “It’s 10.5 million people. They view shopping as entertainment, which may be more important than buying. It all boils down to the experience you can offer them.”

Arthur Coppola, ceo of Macerich, recently told Citi analysts that the convergence of physical and digital is coming soon. “We have about 20 retailers that represent about 50 percent of our revenue today,” he said. “There are probably 2,000 retailers that we don’t even do business with. And as I think about that, I see that as a huge opportunity.

“One of the coolest, hottest online angel-type retailers is Combatant Gentlemen,” Coppola added. “I think that’s going to be the next big retailer.”

“Finding new retail concepts has always been a challenge for regional malls,” said Robert Perlmutter, Macerich’s senior executive vice president of leasing. “We see digital brands as potential generators of new tenants. Bonobos, Warby Parker and Blue Nile have physical stores. There’s a whole cadre of e-tailers trying to figure out how to get to brick-and-mortar.”

Edens ceo Jodie McLean said 47 million square feet of retail space is on track to close in the next 30 months. “It will make the remaining stores that much more purposeful,” she said. “It’s forcing us to all work together to forge one retail experience.”

McLean wants to take five brands at a property and “figure out how to tie them together. How do we look at the sharing economy and make sure everybody is sharing the consumer?”

She gave an example of a shopper who goes to dinner at a restaurant where the place setting was chosen by a tastemaker. If the customer likes the dinnerware, she can purchase it two doors away.

“Instead of feeling shredded as a consumer, I feel like I’m in somebody’s living room,” she said. “That takes a lot of coordination from us, the landlord.”

Single big events no longer drive traffic to Edens’ centers. “We have music that you can count on every Friday and Saturday night and runners clubs that meet twice a week,” McLean said. “What’s working is where we’ve really fostered community and the community is adapting to the place. Millennials and Boomers are coming together. When projects inspire cross-generations, we know we’re doing something right.”

Edens centers on average generate $500 to $600 in sales per square foot. “The number has been going up, but not by a lot,” the executive added. Consumers have to visit Edens centers 3.5 times per week. Grocers such as Whole Foods used to be good for 2.2 trips, but in 2016, that figure dropped to 1.5, so McLean is looking at adding yoga studios, gyms and fast, casual food.

Dwell times are an issue across the industry. Shoppers at Ivanhoé’s Canadian centers in 2007 visited five stores on average per trip. Today, it’s down to three stores. “That doesn’t mean their consumption has changed,” Sirois said. “Their journey starts on their sofa and they come to the mall way more informed.

“Canada offers a great potential for retailers,” Sirois added, referring to newcomers Saks Fifth Avenue and Nordstrom. “The currency is somewhat devalued, but that’s probably temporary. We’ve gone through changes — some retailers, like Target, have left, but their space still hasn’t been absorbed entirely.”

Ivanhoé Cambridge “incubates new concepts to allow some high-performing retailers to entertain new ideas. For example, Aritzia is entertaining some new concepts. We’re all looking to offer the best of the best to our consumers, so we offer flexibility.”

If there’s been little construction progress at shopping-cum-entertainment center American Dream in East Rutherford, N.J., it’s “due to the fact that we expanded the size of the water park,” said president Don Ghermezian. “It’s a minor slowdown. We had to redo all the structural steel.”

The project is 75 percent leased with Hermès, Saks Fifth Avenue, Lord & Taylor, Primark and FAO Schwarz among the tenants. Ghermezian said he’s “in active discussions with 20 to 30 uberluxury and contemporary brands.” Besides an indoor ski slope, observation wheel, amusement park and aquarium, there will be a Las Vegas-style theater for a permanent Cirque du Soleil show.

“About 50 percent of the traffic will be tourist-based,” Ghermezian said. “Brazilians and Russians are hurting, but 58 million tourists are still coming to this area.”

“We’ll see continued consolidation in the department-store industry and the repurposing of lesser malls,” said Gene Spiegelman, vice chairman of Cushman & Wakefield. “Everyone is working to improve the consumer experience, turning food courts into enticing dining halls and enhancing the entertainment.

“In cities such as Manhattan, we’ve reached an inflection point [in terms of rent] where there needs to be a rebalancing of supply and demand,” he said.

Available space exceeds demand in neighborhoods such as Broadway in SoHo; Fifth Avenue between 42nd and 49th Streets, and the Meatpacking District, among others. “Rents are flattening out,” Spiegelman said. “We’re not seeing the transaction activity and there’s going to have to be a reset. You can’t deny the fact that deal-making and rents go hand-in-hand. Retailers want to be smart.”

A few heated markets, like Brooklyn Heights and Smith and Court Streets in Brooklyn, have seen tenants “forward-leasing” spaces a year or two before they become available, said Brad Cohen, senior director of Eastern Consolidated. On Broadway in Manhattan’s SoHo, rents are flattening out, but stretches of the Bowery are going strong. “Some of the side streets are benefiting tremendously,” Cohen said, citing 4 West 19th Street, where Eastern arranged for the sale of a retail condo for $6.4 million, then leased the space to Zuber, Jackie Kennedy’s wallpaper and fabric-maker of choice, for $200 a square foot.

“The days of writing off marketing expenses are long gone,” Cohen said. “The stores have to make money. If you’re a landlord and you want to be competitive, you’re going to have to adjust your [asking price] or how you structure a deal. Maybe you carve up a space.”

“Any time this happens, it creates opportunity,” said Brandon Famous, CBRE’s senior managing director and retail leader for the Americas. “The reality is there is still significant demand. [The store closures] will give other people an opportunity to get into markets they may not have been able to get into because [there will be] a drop in rental rates.

“Retailers are thinking smarter,” Famous added. “There are more diagnostic and analytics capabilities. Choosing a location is no longer educated-guessing. Retailers can evaluate and determine what’s best. It’s not that they’re being cautious, they’re being smarter.”

“People are looking to get out of space,” observed Karen Bellantoni, executive vice president of Robert K. Futterman Associates. “There’s a sublease market and people aren’t afraid of putting in bids that are below asking rents. There’s a lot of space on the market.”

“Rents have been flattening out for a few months,” said Robert Cohen, vice chairman of RKF. “A few years ago, five or six people were competing for every space. Landlords realize what’s going on and are reaching out to make deals. People are nervous and cautious. January and February were in the doldrums due to China. In March, April and May, things picked up quite a bit, but it’s a longer road to get deals done.”

Bellantoni sees beauty brands are “expanding like crazy. Kikko and Make Up For Ever are doing deals, Rituals is signing leases and Sephora is pursuing spaces. Ath-leisure is also doing well.”

Brokers are eyeing young chains such as Planet Blue and Pirch. The former, which recently opened on Broome Street in SoHo, sells Mara Hoffman, Rory Becca, Kendall + Kylie and Show Me Your Mumu. Pirch, which features functional kitchen, bath and outdoor living areas, is set to bow on Lafayette Street next week.

“We’ve made the bet and continue to believe that great retailers need locations on streets,” said Chris Conlon, executive vice president and chief operating officer of Acadia. “The correct omnichannel execution has to include these high-traffic street locations. When pure-play e-commerce retailers realize they need a store strategy, they tend to take street locations. The early read from the Birchbox folks, is that they want to focus on cities and high streets.”

Acadia over the last five years has been acquiring properties on high streets in New York, San Francisco, Boston and Washington, D.C.

“We’re starting to aggregate in Boston on Newbury Street, Boylston Street and Downtown Crossing,” Conlon said. “In Chicago, we bought 19 properties at once.”

Naveen Jaggi, president of retail brokerage at JLL, said he’s focused on the top 150 malls in America, which are performing well and whose “owners are investing in their upgrades.”

“The challenge for international retailers is how to compete in the most competitive retail market — the U.S. Uniqlo, Muji, Primark, Superdry and Lidl have a growth future in the U.S. They’re coming in very cautiously and focusing on major markets.”