Oxford Street and its environs will see 2.9 billion pounds of investment by 2022.

A rendering of the new mixed-use development on New Bond Street, that will house Canali, KKR and Glencore.

LONDON — Pre-election anxiety, a Brexit deal that’s been postponed once again, and British high street woes have done little to dampen the appetite here for growth and investment in prime property.

Due to the new Alaïa and Chloé stores, to the refurbished Louis Vuitton flagship and to all of the public and private works going on in the neighborhood, New Bond Street and neighboring ones have become even hotter properties.

According to market sources, Versace will open a Bond Street unit in what is now the Bally flagship, on the corner of New Bond Street and Maddox Street. Until now, Versace’s main London outpost has been at 179-180 Sloane Street, although the brand did have a London flagship on Old Bond Street at the corner with Stafford Street in the Eighties and Nineties. That unit is now occupied by Gucci.

Celine women’s wear is also preparing a move to Bond Street, having planted its flag on nearby Mount Street in 2014. Market sources said the LVMH Moët Hennessy Louis Vuitton-owned brand will move into the former Smythson unit on New Bond Street, next door to the new Casa Loewe shop, which is located at 41-42 New Bond.

Celine men’s wear already occupies a site on the corner of New Bond and Grafton Streets. 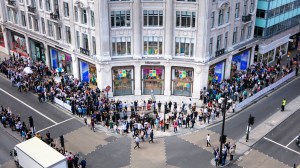 The moves are part of a 2.9 billion pound, or $3.73 billion, windfall — from private, public and international investors — that Oxford Circus and its surrounding neighborhood will see by 2022, according to a report by New West End Company, set to be released Wednesday.

The report, “Oxford Street 2022,” said the transformation will be the biggest the area has seen in more than 50 years. It comprises Crossrail, a 73-mile, multibillion pound railway line that will run east to west through London and into commuter communities, and promises to whizz passengers from central London to Heathrow in 30 minutes.

Crossrail — which, like Brexit, has been repeatedly delayed, much to everyone’s frustration — is expected to deliver 60 million new visits to the West End and to boost spending to 13.2 billion pounds by 2022, 40 percent higher than in 2019.

As of 2020 — as soon as the paperwork is signed -— the West End will also be classified as an “International Centre,” which means it does not have to limit itself to retail, and can fill its properties with showrooms, cultural centers, food and leisure, cinemas, theaters and experiential spaces, and potentially extend Sunday shopping hours, too. 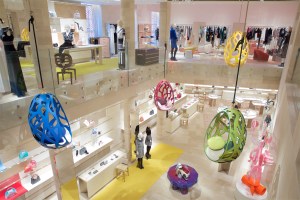 Jace Tyrrell, chief executive officer of New West End Company, which lobbies on behalf of businesses in Mayfair and around Oxford Circus, said the new international status will be a game changer for the neighborhood.

“It’s a very, very fundamental shift that will also allow us to lobby and campaign at a government level, a mayoral level and a local level. International Centre status means that we are an asset to London, and need to be level with other cities around the world,” said Tyrrell, adding the area’s new status could come with a 260 million pound annual boost in spending. 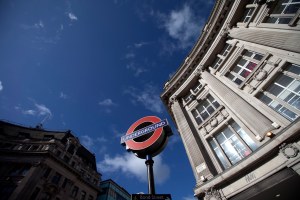 “You’re going to see direct brand-to-consumer propositions; digital-to-physical products. Selfridges is opening a cinema on Oxford Street. We’ve got concepts we probably haven’t even thought about opening in the next five years. It will still be a retail-dominated area, but you will have this hybrid experience.

“Tesla had to close a couple of years ago in the neighborhood. In the new plan, they would be allowed to remain open on Bond, Oxford and Regent Streets if they chose to do so,” he said.

Market Hall, the first all-food concept on Oxford Street and the U.K.’s largest food hall (housed in the former space of the BHS department store); the first new theater in the West End for 50 years in Oxford Street East, and Selfridges’ cinema in Oxford Street West are among the developments soon to be unveiled.

In the meantime, luxury and fashion retailers have been scrambling to fill new or newly refurbished developments, on Bond and Albemarle Streets in particular.

Canali has signed a new 10-year lease for a site on the corner of New Bond Street and Brook Street that will span 5,014 square feet over three floors.

The building, at 64 New Bond Street, is part of the Hanover Square mixed-used development that will comprise retail, a restaurant, residential apartments and offices, some of which have already been taken by Glencore and KKR for their new European headquarters.

On nearby Old Bond Street, the Italian outerwear brand Herno has opened, while two new hotels are set to move into the neighborhood, the LVMH-owned Cheval Blanc on Grafton and New Bond Streets, and the Mandarin Oriental on Hanover Square.

According to Matt Farrell, managing director of Trophaeum Asset Management, which owns much of Albemarle Street and chunks of commercial property in central London, brands and companies want “more space and bigger stores. The most prime locations are fine” right now, despite the social, political and economic tremors rattling the U.K.

Albemarle Street, which runs parallel to Bond, is drawing more brands — and footfall — with Bond Street retailers such as Cartier and Tiffany & Co. breaking through internal walls and opening entrances on the street. Moncler is set to do the same with its Bond Street shop. 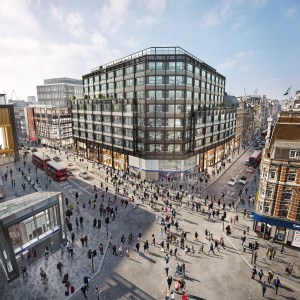 Those Bond Street retailers argue that having a second entrance on Albemarle generates more footfall and gives clients easy access to the shops, bars and restaurants on the street. Bond is famously short on food and beverage options.

French brand Maison Corthay, which specializes in handmade men’s shoes, is set to open a 538-square-foot store on Albemarle, while Oswald’s, a private member’s club owned by Robin Birley, is adding a floor, with plans to open a Japanese restaurant.

As reported, the Global Blue VIP London lounge, which is located on the street, saw more than 29,000 guests from 88 nationalities. Over the past year, they spent over 49 million pounds shopping in the U.K., with Chinese tourists accounting for the largest chunk of that spending.

Tyrrell would agree with Farrell that luxury is doing better than the high street, partly “because of a different customer base. What we’ve had is two years of a very weakened pound, which is attractive. And if you look at some of the troubled cities in the world — Paris with the protests or parts of Asia — London is relatively safe and people want to come here.

“I think the challenge for us post-Brexit will be to keep the fluidity and the transactions happening between here and the Continent, and globally, too. And we need to keep investing and elevating,” he said.

Tyrrell, who is headed to MAPIC, the international retail property event in Cannes, France, this week, said he’s preparing to pitch the area as packed with potential, a “people, not property” focus and an emphasis on experiences as well as retail.

The area’s public realm is also getting a boost, with a record quarter-of-a-billion-pound investment earmarked to improve streets and sidewalks. That includes a 150 million pound injection by Westminster City Council alone for the streets, with two new proposed public piazzas at Oxford Circus and Marble Arch, cleaner air from reduced traffic and zero-emission buses, and wider and more comfortable footpaths, according to New West End Company.