Jimmy Choo, which started here in 1996, has kicked off its West Coast expansion with a new flagship on Rodeo Drive. 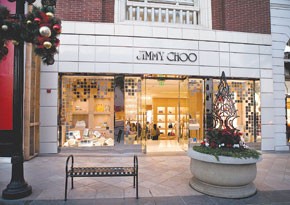 BEVERLY HILLS — Jimmy Choo, which started here in 1996, has kicked off its West Coast expansion with a new flagship on Rodeo Drive.

The brand plans five West Coast stores in the next two years, adding to the 22 U.S. shops that account for half of the worldwide sales of about $171 million. There are 43 stores abroad.

“Beverly Hills has always been a particularly important market for Jimmy Choo, since our brand was launched here 11 years ago,” said chief executive officer Joshua Schulman. “It is only appropriate that we elevate our presence here to a flagship presentation, on par with Madison Avenue in New York or Sloane Street in London.”

Among the West Coast stores are a 1,500-square-foot unit in San Diego’s Fashion Valley Mall, scheduled to open in June; a store in Scottsdale, Ariz., that will open in February, and a 2,000-square-foot store in The Shops at The Bravern in the Seattle suburb of Bellevue, Wash., planned for 2009. There’s also a 1,900-square-foot shop in the new Palazzo wing of the Venetian in Las Vegas, opening next month and replacing a decade-old unit in the same hotel, as well as a scheduled overhaul of the South Coast Plaza store in Costa Mesa, Calif.

At more than 3,000 square feet, the Rodeo Drive store is more than twice the size of the original Beverly Hills location on North Canon Drive, Choo’s first U.S. shop. The new unit, which opened Monday, is a far more elaborate setup than the previous shop, with modern crystal chandeliers, built-in display cases that span the store’s walls, as well as smaller shelves to showcase accessories and a new sunglasses line.

In addition to the brand’s signature $600 shoes — with one style exclusive to the flagship — the store will carry Choo’s $2,000 handbags, the newly launched line of sunglasses and a fragrance that will make its debut next year.

The flagship features Choo’s first VIP fitting room, which has a private elevator with direct access to underground valet parking.

“Our original Beverly Hills store has always been a top performer for Jimmy Choo; however, we have had space constraints in our current location that have prevented us from showing the breadth of the collection and reaching our fullest potential,” Schulman said.

Choo’s neighbors include René Caovilla, which is moving in next door. Georg Jensen, Versace and Lalique are all in the adjacent Two Rodeo luxury retail complex.

Playing a key role in the effort is an in-house design team, which president Tamara Mellon spearheaded about four years ago.

“Because we have very aggressive rollout plans for our stores, it was much more efficient to bring the design in-house and streamline the process,” Mellon said.

The location of the new store was paramount to the brand’s image, and finding the right spot took more than two years, she said.

“The old store was solely a destination, there was no pedestrian traffic on the street,” Mellon said. “It’s hard to beat Madison Avenue and Sloane Street, but the new Beverly Hills store will certainly be a top performer, probably in our top five.”