There's been a flurry of leasing activity on Rodeo Drive but second- and third-tier shopping districts are struggling. 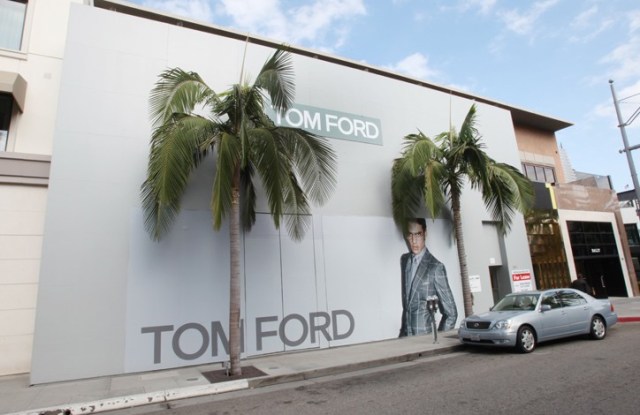 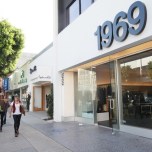 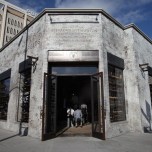 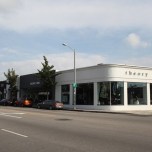 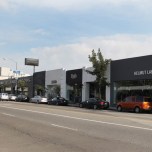 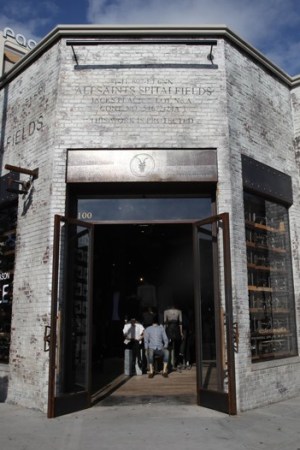 AllSaints Spitalfields is a newcomer to Robertson.

LOS ANGELES — The gulf separating the haves and have-nots among specialty retail districts here is widening.

Prime stretches of marquee venues — Rodeo Drive, Robertson Boulevard, Melrose Place and Melrose Avenue — are starting to get traction, but second- and third-tier retail enclaves have it tougher.

In the top areas, vacancies are diminishing, rents are bottoming out and newcomers are taking root. The total number of available retail spaces can be counted on fewer than two hands on the key blocks of Robertson Boulevard and Rodeo Drive. There’s a flurry of launch and leasing activity, particularly on Rodeo, with Lanvin, Tom Ford, G-Star, Stephen Webster, Richard Mille, Agent Provocateur and Solange Azagury-Partridge opening this year or in 2011.

“The confidence is definitely coming back” in the top tier of the market, said Stuart Millar, executive vice president of G-Star North America, which plans to open a 5,000-square-foot flagship on Rodeo Drive in the first quarter of 2011. “There is another six- to 12-month window where you can be pretty aggressive with getting the right deal from the landlord.”

The outlook is more uncertain for retail venues such as Third Street, Beverly Boulevard and La Brea Avenue, which lack national and international brands. Although a few retailers encouraged by low rents are taking risks on those streets — jeweler Alexis Bittar opted for West Third Street for one of his two new boutiques — they haven’t come close to plugging the holes left by the recession-driven retail exodus in 2008 and 2009.

The strength of Los Angeles retail real estate varies from block to block as companies opt for surefire locations, said Jay Luchs, an executive vice president at CB Richard Ellis. “As opposed to saying the entire market is back or is bad, it is literally space to space, street to street,” he said. “Robertson and Rodeo are really strong right now, but if you go to Beverly Drive one block over, you can pick and choose.”

Patrick Ortiz, a vice president of NAI Capital who handles the leasing and sale of properties in West Los Angeles, estimated vacancies were as high as 50 percent on certain blocks off the main drags. “The shift is from the landlord as the monster to tenants as the monster,” he said. “Tenants are able to make deals they have not been able to make in 50 years.”

Los Angeles has been staggered by the recession. Specialty store fixtures such as Tracey Ross shut down. Unemployment in Los Angeles-Long Beach was 12.6 percent in September compared with 12.2 percent a year ago, and MDA DataQuick reported that the number of Californians entering foreclosures increased almost 19 percent in the third quarter from the second quarter. Among the more hopeful signs: Passenger traffic at Los Angeles International Airport increased 4.8 percent through August compared with the year-ago period, and hotel occupancy climbed 5.9 percent to 66.8 percent, according to LA Inc., the city’s convention and visitors bureau.

Here’s a rundown of the area’s high-end shopping streets:

Retailers said sales, visitors and the overall mood are turning positive. Sybil Yurman, president of David Yurman Inc., said business at the fine jeweler’s Rodeo Drive store was up 25 percent this year compared with 2009 and the unit “is profitable,” and the Luxottica Group-owned Ilori store is meeting “profit expectations,” according to Michael Hansen, Ilori’s vice president and general manager.

Wes Carroll, manager of fine jewelry brand Chopard’s store, said the lift in tourism, especially from overseas, boosted sales. “We have seen a big influx of Chinese and Russians, and those tend to be the clients buying on the larger scale, especially the Chinese,” he said.

Even with business recovering, the expense of operating on Rodeo intensifies pressure. Most merchants with experience on the street said big luxury brands can register profits and commit to a future on the street. Sources said Valentino was heading to a more central Rodeo Drive location, and Prada and Hermès would renovate their stores.

Rodeo Drive, which has been mythologized by Hollywood, has largely retained its high-end character.

“When we joined the neighborhood our expectation was to sit with other luxury retailers,” said Ari Zlotkin, chief executive officer of Anne Fontaine, which opened in 2002. “Rodeo Drive has remained true to its luxury roots and allure.”

The street’s cachet is attractive to brands outside the luxury sector, sometimes irking those who would prefer Rodeo to be exclusively dedicated to luxury. G-Star is the latest nonluxury brand to break into the street’s retail ranks, and Bebe, Guess and Juicy Couture paved the way.

“We had to find an area that would support our brand and speak to our customer,” said Laura Mays, senior vice president of retail for Juicy Couture, which opened its Rodeo Drive store in 2007.

Juicy Couture and the like planting stakes on Rodeo Drive makes the street appeal to a more diverse crowd, as do retailers introducing entry-level price points. “Peoples’ misconception is that you can’t afford anything here, but every luxury brand has something to get you hooked on luxury,” Carroll said.

It’s been a wild ride.

Multiline stores such as Kitson, Curve, Vionnet, Lisa Kline and Madison, which moved to West Third Street from Robertson, cultivated a young, hip consumer that designer, denim and contemporary brands coveted. Those brands — including Chanel, Ralph Lauren, D&G, Seven For All Mankind, True Religion and Rock & Republic — swooped in at the height of the prerecession mania, and the street became a mecca for denim and designer, as well as contemporary.

The bubble burst as the economy soured. Luchs said there were eight bidders on the former agnès b. space on Robertson and Alden Drive before September 2008, when rent approached $30 per square foot. After September, the bidders withdrew, and the space was empty until AllSaints Spitalfields opened last year, paying about $20 per square foot, he said.

“There was a little bit of a threat to Rodeo when Robertson got really, really hot, and there was a feeling that Rodeo was losing its customer, and there was nothing new….Rodeo is back stronger, and Robertson has gone into more of a groove as opposed to rocking it straight up,” said Chuck Dembo, a commercial real estate broker.

With reduced rents, Robertson has filled spaces with foreign brands — such as AllSaints, Odd Molly, Moods of Norway and Paul & Joe — that are using the street as a platform for growth in the U.S. and national brands such as Gap that view Robertson as an important launchpad for new concepts. Gap premiered 1969 Premium Jeans last year with a pop-up shop on Robertson that moved across the street into a permanent location in February and launched another pop-up shop next door for the 1969 Kids that ran from June to Oct. 25.

The demand for space suggests that rents will rise, although retail performance on the street has been uneven. Sources said several stores were struggling to generate $1,000 per square foot in annual sales, although some are hitting numbers that far exceed that figure, such as AllSaints, which is said to be generating $3,700 per square foot in annual sales.

Foot traffic, the Holy Grail in car-loving Los Angeles, has suffered. “Robertson as a whole has seen a decline in overall traffic since the economic slowdown,” said Aaron Battista, vice president of retail at Seven For All Mankind. However, “the street continues to attract a high-end fashion customer.”

Asked what he would advise retailers considering Robertson, David Reiss, founder and ceo of the British brand Reiss, which opened a 12,000-square-foot store on Robertson in 2007, said, “Don’t necessarily look at it from a commercial perspective, look at it from a brand perspective. [If you ask,] ‘Is this going to be a street to drive my business?’…You are better off going to the Grove or Third Street [Promenade] in Santa Monica.”

The economic dive did a number on these locales. Vacancies mounted as stores shut, including Mary Norton, Lambertson Truex, Me&Ro, Miss Sixty, Sergio Rossi, Mulberry and A Bathing Ape. Rents were halved to $6 to $10 on Melrose Place and $6 to $7 on Melrose Avenue around La Cienega Boulevard. Foot traffic slumped.

“For rent” signs remain a staple. Luchs estimated there were 30-plus spaces available — but signs of life are emerging. Vanessa Bruno, Y-3, Vivienne Westwood, Faith Connexion and TenOverSix are among those that have opened or will open on Melrose Avenue near Melrose Place, and Zero + Maria Cornejo and Bookmarc have opened on Melrose Place.

Kristen Lee, creative director and co-owner of TenOverSix believes the collection of stores — Diane von Furstenberg and Helmut Lang, among others — on Melrose Avenue compels shoppers to travel from one store to another.

Though stores on Melrose Avenue and Melrose Place — a thoroughfare pioneered by Marc Jacobs, Marni and Temperley London before Oscar de la Renta, Carolina Herrera, Ports 1961 and Monique Lhuillier set up shop — are still mostly driven by destination rather than impulse, shopping and retailers have come to grips with that reality. They describe having to merchandise appropriately for Angelenos’ tastes and court both stylists and loyal customers.

Jacqui Wenzel, president of Ports 1961, said the store initially had a small, subtle sign reminiscent of the brand’s New York location, but shoppers arriving at Melrose Place in cars couldn’t see it. About six months ago, Ports 1961 replaced the sign to attract more attention and sales jumped. “You have to be pretty confident in your brand when you are there.”

Maria Cornejo is comfortable with doing business as a retail destination on Melrose Place. “For us, it’s about establishing what our brand and collection stands for in Los Angeles,” she said.