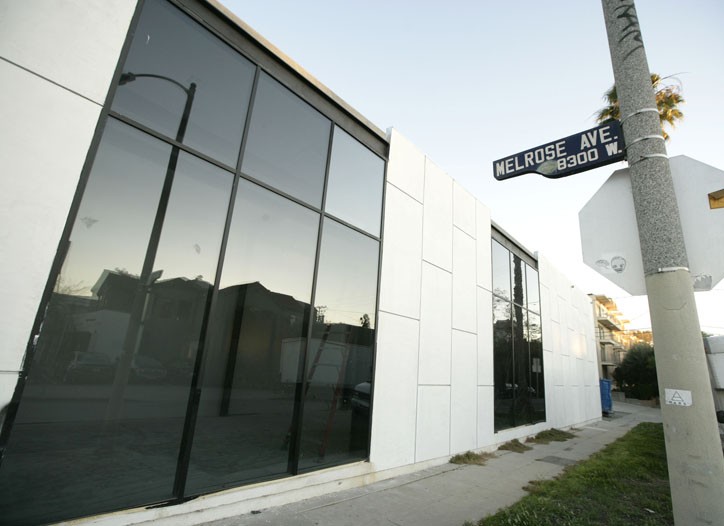 LOS ANGELES — Melrose Avenue, once among the hottest retail and fashion strips, is feeling the chill of California’s disastrous economy.

The challenges of the Melrose corridor — along with Los Angeles districts such as West Third Street, among others — are a microcosm of the plight facing smaller shopping areas here that attracted tenants when consumer spending was at its peak, but don’t command significant tourist traffic and lack ubiquitous chains that are more capable of weathering economic upheaval.

Vera Wang has scrapped launching a Melrose Avenue store for her contemporary Lavender line, which is not in production. Initial plans called for Wang to open two adjacent units comprising 11,000 square feet, but company president Mario Grauso confirmed the project has been cut to 4,000 square feet for a single door. The scaled-back Vera Wang boutique is expected to open in February.

“At the time we decided to go in [on Melrose Avenue], we didn’t foresee the depth of the economic downturn, nobody did,” Grauso said. “We have to do what’s best for the company.”

Miss Sixty and its sibling brand, Energie, are looking to sublease their 13,000-square-foot, $50,000-a-month shared space on the corner of Crescent Heights Boulevard; Original Penguin has listed its 4,500-square-foot store for rent, and Susan Dell’s Phi, slated to make its West Coast debut on a corner near Orlando Avenue, withdrew from the deal in September, according to people involved in the transactions.

Nanette Lepore shut her second Los Angeles boutique on Melrose less than a year after it opened; Max Azria’s BCBG outlet — formerly a BCBG store — wants to sublease its space. Company founder Max Azria, whose Hervé Léger by Max Azria line also has a boutique on the avenue, said the Melrose shakeout will be lasting.

“It is a beautiful street, but we don’t need so many of the stores that we have,” Azria said. “Local L.A. people wear jeans and T-shirts a lot. It’s casual. There are too many stores for the needs of the L.A. public.…I can tell you something — Melrose has changed badly and I don’t think it will be able to come back.”

Although some analysts, retailers and manufacturers said the industry in California has bottomed out and there will be signs of a rebound by mid-2010, commercial real estate is likely to lag in a recovery.

Unemployment in California is still at the highest level since before World War II, and the state budget deficit is projected at $21 billion, just months after state officials cut billions of dollars in expenditures and temporarily boosted income and sales taxes and fees in order to plug previous shortfalls as revenue drops.

“It’s no surprise to see areas like Melrose affected, it’s very retail heavy and had some high-end brands, too, so as the retail sector struggles, you see fallout there,” said Jack Kyser, chief economist for the Los Angeles County Economic Development Corp. “Even if people slowly begin to spend again, you combine a steep spike in rent with the prolonged recession’s impact on retail and people will seek other shelter.”

Even high-profile Robertson Boulevard, which is home to Chanel, Polo Ralph Lauren, Tory Burch and other influential boutique chains such as Lisa Kline, Curve, Kitson and Intermix, has seen the closings of other stores, including Robert Clergerie, agnès b., Horn, Peter Alexander and the relocation of Diavolina, Madison, Waterworks and American Apparel. New leases on Robertson include Odd Molly, All Saints, Moods of Norway and Splendid.

“One of the hard parts for Melrose is that it’s not a tourist draw; if people are coming to L.A.…Melrose Avenue isn’t the place they’ll want to go see,” said Jay Luchs, an executive vice president at CB Richard Ellis. “There are a lot of smaller names there, and the ridiculously inflated rents on Melrose Place drove some tenants onto Melrose Avenue instead.”

Just a few years ago, leases were being signed for $12 to $14 a square foot, including deals for Theory, Max Mara’s Max&Co. space and Nanette Lepore’s now-shuttered shop. Rents have now settled around $5 or $6 a square foot along the nine blocks of Melrose Avenue between La Cienega and Crescent Heights Boulevards, and are less than $4 a square foot from Crescent Heights to Fairfax Avenue, just four blocks apart.

“There’s always up and down with rents due to supply and demand,” said Chuck Dembo of Dembo & Associates, a Beverly Hills-based commercial brokerage. “A shorter retail stretch like Robertson that has name cachet will always be on the higher side of that equation and will tend to be less vulnerable, but that’s not true of other areas with less recognizable street names.”

One upside of the proliferation of empty space is that the vacancies provide opportunity for retailers hunting for bargains.

Christian Audigier is moving in on the north side of Melrose Avenue east of Crescent Heights; a major hair salon chain, Toni & Guy, will take over a vacant space next door to Fred Segal, and Vivienne Westwood bought a two-story, 5,000-square-foot building on Melrose for $5.5 million, where the brand will set up shop next year — a space once designated for eco-friendly designer Linda Loudermilk, whose store plans fizzled last year.

Longtime locals, though, maintain Melrose’s market correction is one that will restore character to the street.

“Melrose is not going to go away — there are just a different mix of people that will go in, from retailers to shoppers, it’s an adaptation to changes in the economy,” said Whitney Weston, who oversees the Melrose Avenue Trading Post, a weekly, flea market-style bazaar that attracts young hipsters and bargain-hunting fashion devotees. “We’re kind of like the antimall.”