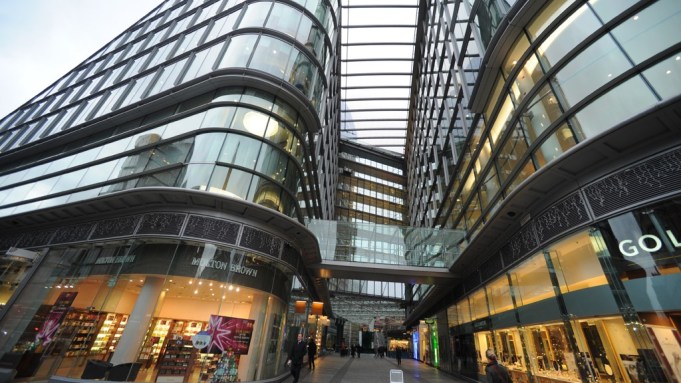 Never mind that it’s Queen Elizabeth’s London neighborhood, the former home of Winston Churchill, Wolfgang Amadeus Mozart and Ian Fleming, plus a major British transport hub — until very recently, no one paid much attention to the look and feel of Victoria.

Crowded with commuters, government office workers and tourists, and lined with dirty, dreary Sixties office blocks, the central neighborhood of Victoria has been largely ignored by the wealthy and fashionable, despite its proximity to Buckingham Palace, St. James’s and Green Park, and its handsome stock of Victorian-era, red-brick apartment buildings.

The old Victoria’s days are numbered, however: Local property owners and developers have begun to exploit the neighborhood’s potential, tearing down the drab Sixties buildings and replacing them with glittering glass structures, while the fashion, art and design crowds have begun to trickle in. Over the past few years, Burberry, Tom Ford, Phillips de Pury & Co. and Marc Newson Ltd. have opened new offices and headquarters in Victoria, while Jimmy Choo and its parent, Labelux Group, are set to move into a newly refurbished building next month.

All figures are calculated at current exchange rates.

Fairhall said it was Land Securities’ construction of Cardinal Place, completed in 2006, that triggered the rest of its redevelopment projects in the area. Land Securities managed to attract new businesses, such as Microsoft, 3i and other financial and tech companies, as well as retailers including Marks & Spencer, Topshop and Zara, with competitive rents.

Traditionally, the commercial tenants in Victoria had been government occupiers and oil companies — and the retail offering was unremarkable.

Fairhall added that when Burberry, Tom Ford and Phillips de Pury moved into Victoria — in projects unrelated to Land Securities — her company saw the potential for fashion businesses. “We wanted to get away from the area’s historical tenants and get a deeper, more varied mix. We thought fashion would be fantastic, given the accessibility of Victoria and the style of the offices — they are fully refurbished and some have a retro feel to them,” she said.

The new Jimmy Choo space, at 123 Victoria Street, spans 37,000 square feet and is housed within a refurbished Sixties building with one entrance on Victoria Street and a second on the leafier, more residential-feeling Howick Place, where Tom Ford, Phillips de Pury and Marc Newson’s offices and showrooms are located, in a former post office space. Labelux will house its London headquarters upstairs, and both sets of tenants are set to move in before Christmas.

In part of its push to rebrand and market the area, Land Securities has worked with the London creative agency Show Media to launch a new Web site, createvictoria.com, and a slick, lifestyle-focused newspaper that comes out four times a year. The Shopping Issue of the Victoria newspaper will be distributed on Dec. 2 with the Sunday Telegraph in London.

Land Securities has a total of six residential, retail, and commercial properties — that are new or being refurbished — in the neighborhood. However, it’s not the only company that’s banking on the future of Victoria and its surrounding neighborhoods of Westminster and Pimlico.

Victoria Station — including the London Underground railway — is undergoing a complete overhaul under the aegis of Transport for London, a local government body. A piazza will replace the bus terminal in front of the station, and new Underground entrances and exits are planned to ease the flow of pedestrian traffic.

Burberry, which opened its global headquarters in 2009 at Horseferry House, a former Thirties government building not far from the Thames, is also expanding in the neighborhood. Burberry’s current London headquarters on Horseferry Road spans 160,000 square feet over eight floors, and houses all of the company’s showrooms and offices.

This year, Burberry took a long-term lease on a new property on Page Street, opposite Horseferry House. The space spans 127,000 square feet over 11 floors, and Burberry is expected to move some of its growing operations there during the second half of 2013 — after the building is refurbished.

The work in Victoria is ongoing: Even as it breaks ground for new buildings, Land Securities also plans to circle back to Cardinal Place. Fairhall said Portland House, a high-rise office building in Cardinal Place, will be getting a major facelift.

The building will be transformed into more than 200 private residential units. “It’ll look like new,” Fairhall said. “It’s a very ugly Sixties building and we’re re-cladding it.” Land Securities also plans to upgrade the level of retail in Cardinal Place — Space NK and L’Occitane have recently moved in — and to relandscape the space.

Fairhall said breathing new life into Victoria is proving a challenge: “We’re regenerating an area that’s not a clean piece of paper. We’re having to work around existing buildings and residents. It’s been really hard work to design and to build in what is essentially a thriving part of the city.”