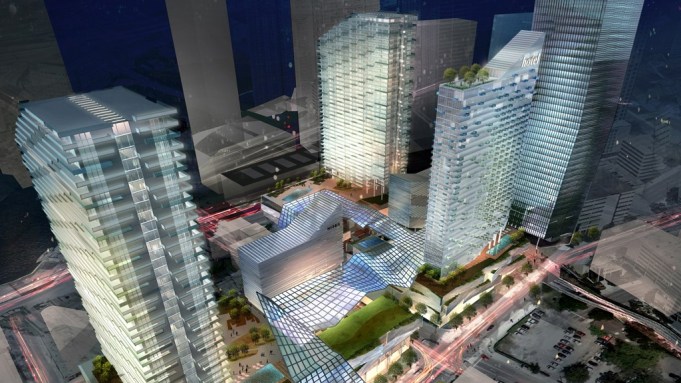 Miami’s retail landscape has begun a seismic shift. Buoyed by Brazilians and other foreigners snapping up residential real estate faster than inventory becomes available, commercial property developers are eyeing every green space and vacant building and lot with a fervor not seen since the city’s prerecession boom. Lease expirations, mall expansions and new shopping centers and districts are resulting in unprecedented choices for stores and consumers alike.

“I feel very confident since Latin Americans, beyond Brazil’s new monied classes, are coming here in droves,” said Michael Comras, founder of the Comras Co., a real estate development and leasing firm in Miami Beach. “With Mexico so unsafe, and [Hugo] Chavez going in for another six years, they have to go somewhere, and Miami appears to be it.”

Rebranded with a new name, Web site and logo, the Miami Design District is attracting the most attention for its transition into a subtropical SoHo. The majority of its property is owned by Miami Design District Associates, a 50-50 partnership between Dacra, a Miami real estate development firm, and L Real Estate, a Luxembourg-based equity fund dedicated to real estate investments with luxury retail components, of which LVMH Moët Hennessy Louis Vuitton is a minority investor. MDDA plans to open 50 stores mixing LVMH and other luxury brands, 15 to 20 restaurants and a boutique hotel through 2014. Several stores such as Louis Vuitton, Cartier and Celine have already relocated from Bal Harbour Shops into temporary locations pending permanent spaces, while Prada, Dior Homme, Berluti, Pucci, Hermès and Agnona are slated to relocate or make their local debut by early next year. According to Dacra president and chief executive officer Craig Robins, LVMH brands will be scattered rather than housed under one roof. Some tenants such as Chrome Hearts bought property.

“Brands are able to make a bigger statement with street locations, and we aren’t enforcing a radius clause,” he said, estimating at least another 50 stores by 2016.

Though many home showrooms that pioneered gentrification will be outpriced, high-end companies such as Design Within Reach and Christian Liaigre are coming in. Since its original address is being gutted, Jonathan Adler moved to a 5,000-square-foot, two-story showroom, its largest worldwide, in the historic Moore Building. Robins reports the bulk of the Moore is intended for a department store, in addition to two new anchor spaces sized at 40,000 and 120,000 square feet.

“I compare the mix of categories and stores to a diverse ecosystem,” said Robins, who’s also building residences and offices to solidify his vision of a 21st-century micro city as a walkable, cultural hub. “Art will be interactive — for instance, visitors will come up through Buckminster Fuller’s Fly’s Eye dome to access the new South Plaza from a parking garage.”

Developer Robert Wennett, another proponent of “wow” design who commissioned Herzog & de Meuron for South Beach’s famous “parking garage” building, partnered with Comras to gentrify a portion of the area north of Lincoln Road to 17th Street nicknamed NoLi. Their proposal, under consideration by the City of Miami Beach, calls for pedestrian streets with Miami modern-style canopies, and parking garages with street retail in lieu of city-owned, surface parking lots.

“It provides a much-needed link between Lincoln Road and the Miami Beach Convention Center, which is also being redesigned,” said Comras.

“We felt so strongly about Lincoln Road’s thriving business that outpriced retailers will want to push north,” said Scott Robins of the single- or multiple-tenant property.

Comras reports an usually high turnover on Lincoln Road since a slew of five- and 10-year leases ended. H&M, Forever 21, Superdry, Lacoste, Custo Barcelona, Armani Jeans, John Vavartos, Fossil, Lush, Havaianas, Dylan’s Candy Bar and Alchemist boutique’s lifestyle expansion have or are opening, while Gap, Swatch and Swarovski are among those renovating, relocating and expanding for splashier statements. Reportedly, Zara and Urban Outfitters have selected spaces as well. He said rent per square foot starts at $175, compared with $85 to $140 on Collins Avenue.

High rents have squeezed out independent businesses, which are settling in Sunset Harbour, an industrial district in South Beach’s northwest corner. Aside from rents averaging $50 per square foot, retailers will get a boost from a pending bridge that connects the enclave formerly cut off by a canal to Lincoln Road’s action. It’s become a top locals’ destination for South Beach’s two main grocery stores, and hip restaurants and salons. Sunset Harbour Shoppes & Garage, another collaboration between Scott Robins and Arquitectonica with 60,000 square feet of retail space, specializes in homegrown tenants like Eberjey’s second freestanding lingerie and swimwear boutique, Sunset Clothing Co.’s premium denim and Panther Coffee, a popular hangout across the bay.

“My goal was to bring back beach residents who were driving to the mainland to eat and shop,” said Scott.

Swire Properties thinks Brickell residents desire better options in their own backyard, too. Its $1.05 billion, mixed-use Brickell CitiCentre gobbled up some of the last undeveloped land in the dense tower canyon. Of its 5.4 million square feet throughout nine acres, retail and entertainment encompasses 520,000 square feet. Approximately a fifth of that space is marked for an urban-sized department store. Everything except an office tower is scheduled for completion in 2015.

Miami Downtown Development Authority reports the population has increased 80 percent since 2000 and projects 85,000 residents by 2015; condos are 95 percent occupied with eight additional high rises in a few years.

“It makes sense that a city’s best shopping and services are in the center, which Miami lacked,” said Culbertson.

Still, some Wynwood Arts District residents and Midtown Miami hipsters aren’t too happy with a Wal-Mart Supercenter opening on North Miami Avenue and Northeast 30th Street in 2014. The retail giant is in the process of filing a Class II Special Permit Application for its first location in the urban core. Design departures from the usual format include street-level storefronts for other retailers and a multilevel parking garage.